When I showed the furoshiki-wrapped potluck dishes in a previous post, I forgot to give a bit more information on just what those wrapping cloths are. They should be much more popular given that they are much nicer and more eco-friendly than plastic bags for carrying. Plus they give fibre artists a perfect excuse to create fancy squares of fabric. There are informative articles here and here and a series of diagrams of the more popular wraps here (for the PDF the link is in the upper right corner of the page). Check out the version for carrying 2 bottles of wine! Handy for your next party invitation but don’t forget to retrieve your furoshiki unless it’s part of the gift. You could always wrap up the empties again to take home. What? You don’t refill wine bottles from the carboy in the basement winecellar? Then I hope you return your bottles for recycling at least.

Speaking of eco-friendly, I’m getting a bit annoyed with the labels “green” and “eco-friendly” because it ain’t necessarily so. Everything we do just living has an impact one way or the other on this planet. We can’t help it. The trick is to keep some kind of a balance but obviously that’s not happening. There are too many people wanting too much stuff above and beyond what we need to be comfortable. As one of those who has too much (but not nearly as much as some people!) I’ve been trying to do my bit, small and insignificant as it may seem, to help redress the balance. One thing I am most militant about is shopping bags. I cannot stand watching someone exit the supermarket with a dozen doubled plastic bags in their cart! I get annoyed when the cashier automatically starts shoving my purchases in a plastic bag before I can say “I’ll pack that in my own bag.” I know they are on autopilot but even in the supposedly greener shops that sell organic foods and natural remedies, they’re just as bad at supplying plastic bags. They even want to put my meat products in more layers of plastic and a rubber band around the eggs! Sometimes they give me a whopping 3 to 5 cents back for each plastic bag I don’t use but that’s not much of an incentive. Why don’t they encourage folks more overtly to use reusable cloth bags?

Rather than just ban plastic bags altogether I think consumers need to take the initiative. And I don’t believe we should substitute paper or plant-starch-based bags for the plastic ones either. They aren’t really any better for the environment. You absolutely have to get into the habit of bringing your own bags with you rather than relying on the store to provide them each time you shop. Cloth bags make so much more sense and are reusable for a very long time. I’ve been using one particular cloth bag for 10 years. It’s washable and advertises my favourite bookstore that unfortunately folded years ago. I had to tie knots in the handles so it doesn’t drag on the ground. (Apparently those who design these things are 7 feet tall with short arms.) The bag lives ready to spring into action in my backpack which also carries lots of stuff. I put the heavy stuff in the pack so I don’t have to carry the weight in my hands. When the pack gets too full, the lightest stuff goes in the cloth bag. When the cloth bag gets full, I go home. Works for me! We just got a spiffy new reusable bag as a gift from our local supermarket though I’m not too happy about it being made from plastic rather than cloth. Hopefully they will be recyclable when they are worn out. T-Man always forgets to bring a bag for the rare occasions when he shops on the way home from work so this one will live in the MINI Cooper. Funnily enough we still have some plastic bags to line the kitchen garbage no matter how hard I try to avoid them.

Back to things crafty, I’ve finished spinning the darkest rose madder wool. It made 4 skeins and about 800 yards in total but as I feared it’s about half and half of two slightly different shades. Rats. I should have kept the two separate instead of trying to ply one with the other, not realizing that I had much less of one which left the rest to be plied to itself. That might be confusing. To recap, I have 2 skeins of a more orange madder plied with a rose madder and 2 skeins of the rose madder plied with itself. If I’d kept them separate I would have had 3 skeins of rose and 1 skein of orange instead. It would have been easier to place the smaller amount in a different area than the main part of the sweater. I’m not going to try un-plying 400 yards though so I’ll just have to make it work.

In anticipation of spinning a different colour from my backyard-dyed wool, I’ve been splitting the sliver (also called “stripping” it) and pre-drafting a bit to loosen up the compacted and even a bit matted wool. See the difference? 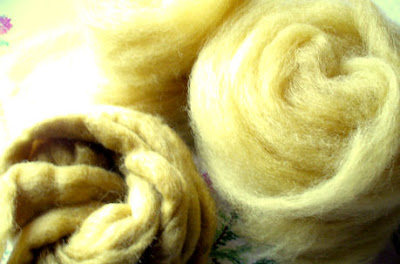 The original marigold-dyed sliver is in front and the prepared nests from a similar length of sliver are in back. Spinning Spider Jenny has a great description with photos of how to do this here (scroll down to the end of the post) and Erica has one here. It’s more work but I love handling the wool and cute colourful little the nests awaiting their turn at the spinning wheel are really pleasing to me. It sure makes a big difference in how pleasant it is to spin and the results are smoother.

I’ve been slowly knitting up the back of my Hepburn Cardi heading toward the underarm decreases. It’s going quite well and I now only occasionally glance at the pattern while I’m working so it can be TV knitting. Until I get to something tricky again anyway. I’m at the toe decreases on one OYT sock and almost there on the other one so they will be completed soon. I’m trying to decide if I can fit a quick second pair of Pink Socks in for my granddaughter before I start her daddy The Ninja’s birthday socks. He has the biggest feet of everyone I knit for so it takes somewhat longer than my usual average of 2 weeks for a pair. I have 5 weeks if I plan to gift him on time so it seems feasible to squeeze in another small pair.

I’ve heard that Meg Swansen says True Knitters are those who have to knit every day. Yup. Or at least play with fibres in some way. How about you?

Oh, yes, every day! If I have to miss more than one or two at the most I get very grouchy. I'm there now & think I really need to spend some time knitting or I will LOSE MY HOLIDAY SPIRIT! Too many lists, too many chores, not enough sitting around knitting time.