Yep, you guessed it. Damselfly has a code in da nobe! Boo-hoo! I kind of felt it coming a wee bit on Thursday but I was hoping it was my imagination combined with the dust we managed to kick up while housecleaning on Saturday. However, yesterday I was wiping my nose occasionally — alternating with both grandkids’ noses — and today it’s an actual full-blown cold. I’m betting I picked it up from the kids when I babysat them on Tuesday. The timing is about right, if you include the part where I was fighting it before it got its hooks in me. Hope I didn’t give it to anyone else last evening at our family Solstice/Christmas lasagna-fest. Not a good time to feel like Dreck The Halls instead of Deck The Halls.

We had a great time last evening at The Ninja’s house, playing with the grandkids and visiting with both our kids and their spouses plus Nana. We opened a few gifts since we would all be in separate places Christmas Day. Milady Daughter got her little niece the best gift ever: a “trunk” filled with 3 different princess dresses plus accessories including shoes, jewelry, a white lace fan and of course a crown. They fit Ms. KiKi perfectly and she teetered around on her “heels” trying on each of her gowns in turn. This one is the favourite:

Notice the Pink Froth Socks that I made her recently worn elegantly with the shoes. The fan was a big hit too but she didn’t much like the crown which is supposed to be kept on with a thin silver elastic that she found uncomfortable. So she went with the black hair-band with roses instead. I’m sure Milady herself would have adored getting such an elaborate set of costumes when she was 3, but she had to make do with lace curtains and tinfoil crowns, along with Nana’s old high heels which just about fit her then! Now she makes her own gowns, so she was really thrilled to find these available for Princess Next Generation. BTW, note T-Man (aka Grampa) and Stargazer mixing it up in the background.

The butter tarts I made were a much-enjoyed desert and I wished I had put walnuts in all of them instead of just a few, not knowing how yummy they would taste. They disappeared instantly! Oh, and Stargazer’s Christmas Stocking went over well with the most important critic, his mom. Each of the family’s stockings is quite different from the others so there is no doubting which belongs to whom. Family harmony in action.

While we were visiting, I worked on the EvenMorePink Socks, which KiKi liked immediately even before she knew they were for her. “They’re pink!” But I didn’t finish them yet. I’m still on the gussets so she’ll have to get them next time I see her on New Year’s Day.

After we got home last night, we were admiring the lovely full moon decorating the branches of our walnut tree. Both T-Man and I got out the cameras (and I got the tripod) and tried photographing it. This is my best effort. Can you see the colourful ring around the moon? 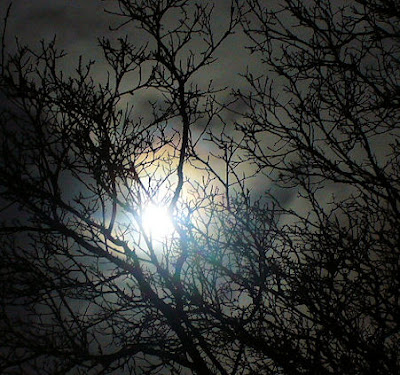 Ooooooo, love the moon peeking thru the bare branches!! You should enter that one in a contest.