Or at least it will be at 10:08pm PST tonight. (Adjust for your own time zone if necessary here.) The sun is the farthest away from us here in the northern hemisphere. Solstice is Latin for “sun stoppage” because it seems to be at the same (low!) height at noon for several days before and after this time. Don’t forget to wish the sun a Happy Return! We usually light a few candles to encourage it. Traditional bonfires are a little iffy when it’s usually raining and the fire department kind of frowns on that kind of thing. We could have a fire in our woodstove insert instead but it needs a new chimney liner and we haven’t had any luck finding someone who will do it. Don’t think we’ll be going to the lantern festival if the weather isn’t good either. So candles it is.

So here’s my latest FO:

On Your Toes Socks
for T-Man 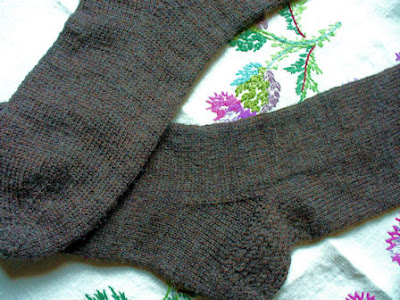 Comments: This is nice yarn though I’m not sure the aloe made much difference in the knitting of it. It’s less splitty than my usual Sisu. He now has a dozen pair which should keep him for awhile so I can concentrate on other family members who want more socks.

Such as the EvenMorePink Socks for my granddaughter: 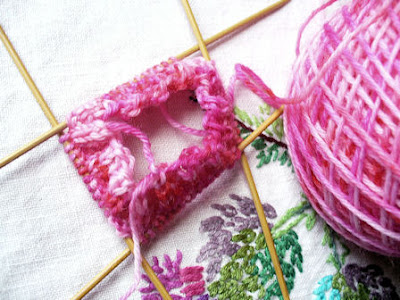 They’re quite a bit farther along than this right now. I was knitting on them during the guild meeting last night. Which was quite a hoot as we played that nasty version of one chooses a gift from the pile and then take a name from the basket who can pick a new gift or take one that’s already been unwrapped etc. Some folks are too nice to take anything away from another and some gifts were hot, passing around several hands before they stopped. I chose an unknown gift and ended up with an amusing set of handknit dishcloths wrapped like a bikini with SOS pads forming the boobs! Of course nobody took them from me so I will gift them to my DIL as a hostess gift at Sunday’s Solstice/Christmas dinner at their house. I don’t use dishcloths, preferring a cellulose sponge and a Dobie scrubber which both get nuked in the microwave often to de-germify. They both last several months in the kitchen before they get demoted to bathroom cleaning or basement sink use where they last even longer before I finally chuck them out.

Very nice blog you have here Louisa! I have met some great people through their blogs, but you're just the second one from Vancouver! I live very far in east Van so haven't joined the guild because it would be such a long bus ride. (A pretty weak excuse I know : ))

Hi L..
Don't ya just love the winter Solstice.. it is my very favorite day of the year...my kids always said that i was a 'witch'as i love the Solstices..can't ya tell the days are getting longer already.. it has been snowing most of the morning...so we will definetly have a white Christmas.. took all morning to scrub out the the parrot's cage.. but he is happy now... a very Merry Christmas to you and yours hugs Sheila