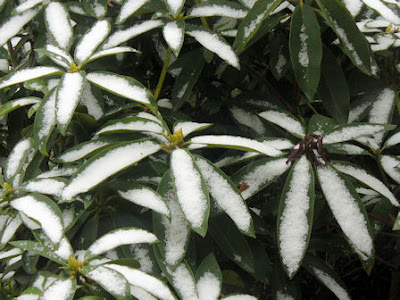 Well, it’s a little bit fun maybe. It’s been snowing itty bitty flakes all day and I’m watching it turn somewhat blizzard-ish at the moment. Unfortunately I can’t go out in it or I’d probably end up ass over teakettle as I stagger around. It’s not nearly deep enough for soft drifts to land in and it’s supposed to stop and turn to rain before Monday. Typical. We just get into Winter Wonderland territory and the next Tropical Punch weather system moves in to ruin the mood.

Yes, I’m still dizzy and to top it off, I also have a migraine. I’ve had altogether too many of those lately as well. Sorry. I’ll stop whining. For the moment. However I am feeling somewhat put-upon by the universe right now. I know, it could be worse.

Meanwhile I’m getting some knitting and spinning done. Not so much readin’ and writin’. Cruising up to the sleeve caps on the Hepburn Cardi and I’ve put the OYT Socks temporarily on hold as I knit on the Pink Socks for my granddaughter. I’ve added a ruffled cuff for an even more girly effect. I also need to make a Christmas Stocking for my grandson before it’s too late and he ends up with one of his dad’s Ninja Socks hanging over the mantel instead. Oh wait. They don’t have a mantel at their new house. Wonder where the stockings will be hung? I’m sure I’ll find out. Too bad but I don’t feel much like working at the sewing machine right now. Though I did end up replacing the zipper on the bag that belongs on T-Man’s leaf blower/vacuum so he can finish his yard cleanup. That was yesterday. Today he can’t work outside at all because the leaves are all either under the snow or frozen solid to each other. Or both. I still have to clean up all the dirt on my sewing machine and surrounding area even though he did clean out the bag as well as he could first. Yucko. Hope it didn’t get into the mechanism. I love my Pfaffy. She’s a vintage treasure.

There’s a lot of traffic right now at my birdfeeder. Here’s a junco taking his turn. 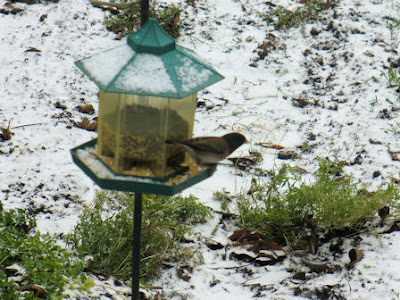