First Socks Of The New Year

I’m on a roll to complete at least as many pairs as I did last year. Count One! 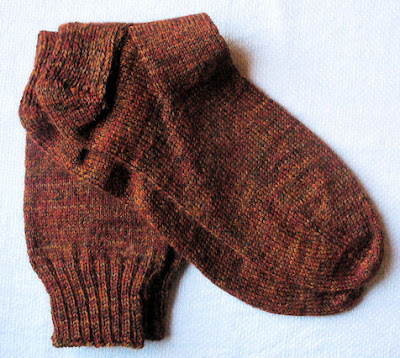 Comments: Done just in time to be dry for his birthday party! As I suspected, I ran out of yarn in the middle of the toe decreases so the extra small ball of yarn was a necessity though there was still lots left over. For some reason the dye colour crocked off on my hands and needles rather badly. After the socks were completed I rinsed many times with still a wee bit of yellow coming out. Hopefully they won’t crock more on his feet! The first half dozen times they are washed they’ll have to be washed carefully with items that won’t discolour, just in case.

Next I started on the pair for my baby brother-in-law on special request. He wanted purple so this is a “manly” purple-grey. I’ve gotten this far in one day: 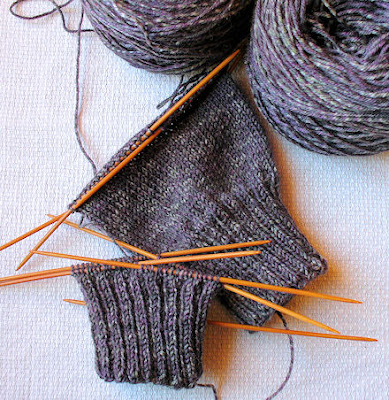 Note that the orange is not wearing off my bamboo needles. At least this is my favourite colour so I’m actually quite happy about it! As long as it doesn’t rub off on anything including me. Now I’m having cravings to start a shawl but I’m controlling myself. I have 2 more pairs of socks to do in the next short while and my Hepburn Cardi to finish before it’s too warm to wear it. I’m trying to keep the WIPs down to only two: one portable and one not. We’ll see how long this will last.

All finished? No more lovely orange fingers? ;) But they were so pretty too.

My birthday is in July, I would love a pair of socks in a blue shade :)

By the way the comment was left by your soon to be niece in law, Nicole

OK, Nicole - since you're soon to be family! Colour preferences, foot length, long or short cuffs? You're on the list. Does this mean I have to knit for D. next? Yikes! His feets are bigger than The Ninja's!