That’s our weather forecast for the next few days. I love seeing all the light! And it’s not too cold, only down to -4C at night and above freezing during the middle of the day. Unfortunately I woke up this morning with a throat that’s even more sore and lumpy than it has been so far so I finally broke down and got an appointment with my doctor tomorrow. I could have seen a different one today but this time I want my own! I trust him to fix whatever’s wrong with me. Though he’ll probably give me a hard time about not coming in sooner. Guess he doesn’t like to be considered The Last Resort, huh?

We went to The Ninja’s birthday party at his mother-in-law’s last evening and a good time was had by all. Except maybe granddaughter KiKi who was kind of tired so she was pretty crabby towards the end. It was late anyway — past my bedtime and hers. I’m betting she fell asleep in the car on the way home. Both kids were all jammied up and ready to be popped into bed the minute they got home, which is a wise move. Anyhow, The Ninja was so impatient to get his socks that he opened them first and put them on right away! They fit and so far didn’t turn his feet orange. Here’s hoping I’ve fixed whatever the problem was.

I think I’m getting everyone in the family expecting socks for their birthday’s now. Yes, I’ve got you on the list, Nicole hon’. Good thing you’re in July! As is Milord (aka Milady Daughter’s hubby). That spreads it out some. Whew! It seems like I’ll be beating last year’s record easy.

I also gifted Milady D with the Miao sewing case and she was thrilled. Now she has to figure out how to pack her stitching supplies in all the little folds. Heh. A few leftover Christmas gifts from absent family members were also finally passed out to the grandkids. That spreads the impact out some especially for the little ones who don’t have a sense of time yet. And they didn’t have to be envious that their daddy got all the gifts! And their was only one candle on the cake so we didn’t burn the house down.

So, back to the book reviews. I hope nobody minds that all my reviews are not totally positive. I think that sometimes it’s a good thing to be critical, but in a gentle way and backed up with logical reasoning. Some people live by the “if you can’t say anything nice, don’t say anything at all” philosophy and some “reviews” are more of a sales blurb than a critical review. But I don’t think that’s very helpful if you’re trying to assess which books you should spend your hard-earned money on. I just calls ’em like I sees ’em and you can feel very free to disagree if you want! After all, everyone does not share the same taste — thank goodness — or this world would be very boring indeed. 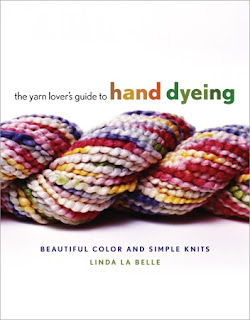 OK, the book is “The Yarn Lover’s Guide to Hand Dyeing: Beautiful Color and Simple Knits” by Linda LaBelle.

This one is a hardcover and pricey so you’d better assess carefully before forking out for it. I couldn’t resist because it has photos of people I know personally in it! Karen Selk of Treenway Silks and her dyers, Mary & Cheryl, are old acquaintances and I’ve bought silk and taken weaving classes with Karen who is a really fun and informative instructor. And they live on Salt Spring Island which is one of my favourite places. So of course what I like best about this book is the photos and the personal stories of the featured indy dyers. The techniques and patterns themselves are so-so, mostly not bad but not fabulous. Does one really need a pattern for a garter stitch scarf? And there’s a crocheted one that’s just as simple. You got that right. Yes, there are crochet patterns in here too. Good for the bi-craftual! Also, again the instructions for the dyeing are both too specific and not specific enough — calling for very specific yarns and dyes but not saying why they are necessary or what else you could use if you don’t have those. (Although there are commercially dyed substitutes for the patterns included, just in case you don’t want to dye your own.) Certain chemicals such as thickeners and Reduran for removing dye off your hands are called for but no explanation as to what they are and why they are recommended for a particular situation. It does cover quite a lot of territory as far as different types and brands of dyes goes, including dyeing with eucalyptus that you can get from your florist which is kind of intriguing. And there are a number of ways to apply these dyes to yarn, including a few that are very painterly and deliberate (as opposed to the haphazard way that I splash dye on things). This book doesn’t seem to be aimed at handspinners because there are no unspun fibres included. Though obviously a spinner could use some of the techniques to dye their yarns after they’re spun up or once familiar with how-to’s, adapt them to roving or whatever. I would rate the dyeing instructions beginner to intermediate level and the knitting/crochet patterns as mostly rudimentary with only a few needing more experience. Pretty yummy photos though. Makes you want to go live in some gorgeous rural place with a big garden and lots of sheep and a view. If you don’t already.

Everyone I know that I give gifts to generally expect socks & face cloths as gifts. The odd time they get surprised but mostly it's socks. They love them mostly because they're not available commercially. I hear thru the grapevine that the BT 7 his folks both love to show them off!! And they feel soooooo good!!

Louisa, I really enjoy your book reviews -- positive & not-so-much. So what dyeing books do you recommend? I have Synthetic Dyes for Natural Fibers, Twisted Sisters, Color in Spinning, ColorWorks, and Color & Fiber. What am I missing? I'm not as interested in natural dyes as in synthetics.

Cynthia, if you aren't into natural dyes then you've already got pretty much everything I could suggest. Everything else is just repetition of the basics. Except maybe Susan Rex's "Dyeing Wool and Other Protein Fibers". This one is self-published so it can be a bit hard to find.

you could check out a new book coming soon called 'eco colour'...see it at www.murdochbooks.com.au

I hope someone over here will import this book (maybe Maiwa?) because it sounds very interesting. Chances are it won't be available through my usual bookstore.