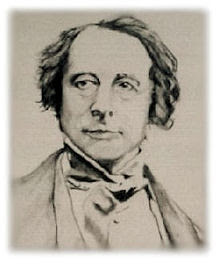 While I’m madly knitting birthday socks, of late I’ve also been indulging in some Dickensian pleasures. You know — the author Charles Dickens? He’s one of my all time favourite writers. I love the complex characterizations and the language and the glimpses into another era. Milord and Milady Daughter lent us their set of the BBC Dickens films on DVD which were made anywhere from the late 1970’s to more recently. As you might expect the quality of the productions vary somewhat (some are more “play-like” in the scenes and some have annoying music) but the actors, whether famous or not-so, are perfect for their parts. The clothing and props are very good as well, though if there was something really anachronistic I probably wouldn’t be able to tell. Can we bring back the handsome frock coat for men, please? We can skip the huge skirts and silly bonnets for ladies though. I’ve read most of Dickens’ works in the past and it’s fun to see it all come to life.

At the same time, I’m also listening to the CraftLit podcast’s serialization of “A Tale of Two Cities” which is a book I’ve read several times. We haven’t watched the BBC version yet. I’m running somewhat behind on these great podcasts. The story begins on episode 43 and Heather is now up to episode 83 and Shelley’s “Frankenstein”. I listen when I can. Nice thing about podcasts is they will wait for you, unlike normal radio that is gone the minute it’s broadcast unless you record it. I have a harder time concentrating when it’s just sound rather than sound-plus-images. And I do better still reading the words myself except that it’s harder to knit at the same time. Not impossible, just harder. So currently here in Damselfly’s pond it’s all Dickens all the time.

Speaking of knitting, I’m up to the gussets on both the B-Bil socks. They’re coming along nicely. His birthday is tomorrow but we plan to invite the family over for dinner sometime later in the next few weeks. That’s when I’ll present them. This weekend is going to be very busy with Dye Day with Milady Daughter and her friend Y tomorrow. MD has planned a very large project that she wants to weave for her SCA garb but first has to get the wool yarn and then dye it in natural dyes. We’ll be going over to the Birkeland Bros first to see what yarns they have available. Since she needs nearly 5000 yards to make a large just-past-the-knee length tunic, that’s a lotta wool! I thought about going over myself ahead of time but decided that first, I’m too tired after cleaning the house while still feeling crappy and second, it’s not my job to do it for her. But the old mommy habits die hard, eh? Always trying to help out and smooth the way. Must control the urge. I have enough on my plate at the moment.

Then tomorrow evening we’re going to a party for T-Man’s work at an expensive downtown hotel. What do I have to wear that’s anywhere near acceptable as “cocktail” dress? Yikes. I don’t own a “little black dress” or anything remotely resembling it in any colour. I don’t own a pair of pantyhose either. Or heels. And wouldn’t wear them anyhow. I’m consoling myself with the fact that he works with a bunch of younger computer nerds who will have their own interpretations. If I’m dressed oddly enough maybe I’ll blend in. At least I’m old enough now not to really care what anyone thinks. I’ll just try to have a good time and to keep my eyes open past 9pm. At least we won’t be drinking too much when the no-host bar reportedly will be charging $7 per glass.

I’ve got time to sleep in a bit as Sunday afternoon is another Ravelry meetup. I’m looking forward to that as always! We have such a good time yakking and knitting or spinning or even weaving. We’re back at The Grind so it’s just a little hoof up with my neighbour, who is a very fast walker.