I went to see my lovely doc yesterday and the office was running uncharacteristically behind. Luckily I had the B-Bil socks to work on while I waited over half an hour. After apologising for keeping me so long, he said “Oh, you were ok with your knitting to pass the time!” Knows me too well, that man. Unfortunately after hearing my long tale of woe and checking me out, he concluded that I have an opportunistic hanger-on virus that jumped in right after the flu. Hence the reason why the antibiotics didn’t affect it. And there ain’t nothing we can do about it but wait until it goes away. Pooh. Meanwhile my throat is sore (but I don’t have strep) and my upper airway is congested (but I don’t have bronchitis) and I cough some (but it doesn’t keep me awake) and I’m a little tired (but not nonfunctional). So I apologised for wasting his precious time but he said better I should come in when he can’t do anything for me than NOT come in when it could be more serious. He’s so sweet. I lurve my doc. 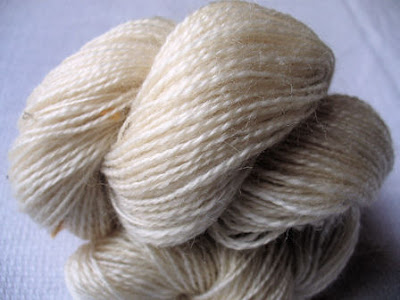 Comments: I can’t count the tpi in such fine singles yarn! So I count the bumps when plied instead. Good enough for my lackadaisical spinning records.

This is the first project on my new lace flyer. I had some difficulty with the wheel wobbling but T fixed it by tightening up the bolt that holds the upright in place. It’s a little more difficult to fold but it doesn’t wobble nearly as much. The wheel is also warped somewhat and it was occasionally throwing the drive band so he sanded down the side of the groove a bit so the rubber drive band doesn’t ride up the rough composite material as much. So far so good!

I do like the new lace flyer though. T-Man made me a new and better hook to thread with. It has a custom-length wire hook that will reach right to the end of the tubular flyer arms. It’s a big improvement over the ugly and dinky one that came with the flyer.

I also fudged a fix for the lazy kate so that I could wind off the singles into a ball for plying. I used one of Mummy’s old aluminum knitting needles through the bobbin and through the hole in the centre of the kate and then into the dead-end hole at the end. Pressure against the other upright holds it in place and it works fine even with two bobbins in it. See?

I plan to mordant this yarn and dye it with botanical dyes so that it will dye both the protein and cellulose contents. I’ve been thinking perhaps deep logwood with maybe a teeny bit of cochineal to make it more purple and more colourfast over alum and cream of tartar mordant. I’ve got some great purple beads to go with it for the Ice Queen cowl. This yarn is not nearly as fluffy as the called-for Kidsilk Haze, but it has a bit of a halo and a nice sheen. Samples will ensue. I should mordant the yarn today ready for Dye Day with Milady Daughter and her friend on Saturday. Or maybe I should dye it tomorrow while I clean up the dye studio so I’ll be ready to assist.

Meanwhile I’ve started on the marigold yarn that I’ve been neglecting for the SeaWool, this one on the regular flyer. Tori is much more pleasant to spin on now that she doesn’t wobble nearly as much. I also am at the heel flaps on the B-Bil socks. In my head I hear that as Bee-Bill so that’s what I’m calling them. If you’ve forgotten, it means “baby-brother-in-law” and it gives me my new nickname for him too. Heh! He’s so gonna kill me if he finds out. But I’ve known him since he was 12 (which amazes his teenaged kids!) so I’ve been thinking of him as my baby brother decades before I met my actual half-brother, who is only a month older (and not at all inclined to be referred to as “baby” anything). Complicated family I’ve got. Remind me to tell you about it sometime.