It turned out to be quite the adventure getting together with my Spectrum Study Group yesterday. For starters only 3 of us could make it to the 4th’s lovely West Van home. The weather was nice but the leftover bits of snow and ice made walking to the bus stop kinda treacherous. I had to bus it to the one with the car and her husband ended up picking up the third because she was afraid to drive over. We did make it safely to our destination because for some reason there was no snow there at all.

We played with making pop-up cards (pattern for flower card is here, scroll down to the bottom, and folded heart PDF is here) and had a lovely potluck lunch. I only made one card and it’s not even finished yet. I knitted on my wimple for awhile instead. Why is my brain just not engaged with paper arts these days? I have enough supplies to keep an entire kindergarten class happy for weeks. And I need several birthday cards by Sunday.

Anyhow, getting home was even more of an adventure. Even though we left around 3pm we still managed to hit the rush-hour traffic at the north end of the Lion’s Gate bridge. This is the famous spot where 4 lanes have to merge into 2 or often into only a single lane. It usually works with the most amazing politeness but it still takes awhile to get across the bridge and into downtown. Whereupon we saw an incidence of road rage when a large angry man stopped his truck, got out and harangued a guy in an adjacent car right in front of us. Obviously the driving politeness is just a temporary thing and wears off once you leave the vicinity. We had no idea what the hissy fit was about but we stayed well back. The rest of the trip was fairly uneventful and I was glad I was being driven all the way because I was quite tired by 4pm when I got home. It was kind of a long day.

Today I got a photo of the Nana Socks. Not great but it’ll have to do. 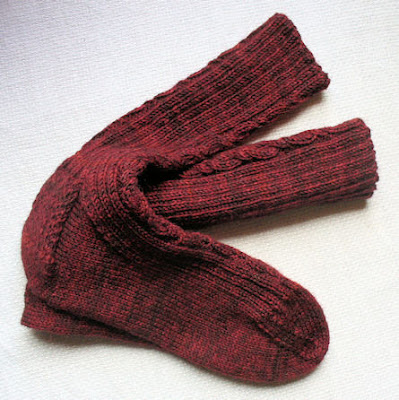 Pattern: No Tears Socks from Posh Yarns: ribbed socks with a cable pattern in centre front (to toe) and back (to heel flap). I heavily reduced and modified the original pattern which was on 72 sts and larger needles. Draft for my miniaturized cable is in this post. These socks are on 64 sts, 6” before beginning the Eye of Partridge st heel flaps, foot is 6.25” before ending cable and rib pattern and beginning toe decreases, decreased to 24 sts total, dog-ear reduction.

Comments: The original pattern would have definitely been much too big for Nana’s teensy little feetsies. These turned out quite cute (I tried them on before I decreased the toe so that I can’t get my feet in them anymore) and there was only a small amount of yarn left over. Leftover left-overs. I had to make a couple of joins though due to a couple of knots in the yarn and running out of one ball just a few rows before the end of the toe. I made what I call a stitched-splice in the middle of the rib and cable area. It’s kind of like a cross between a spit-splice and a Russian join, using a sewing needle to stitch in and out of one of the ends with the other for about 2”. I didn’t do the turn-around-and-back-again like the Russian join but this half-version is strong enough for the purpose. (I learned how to do this join from my adopted mom back when I was a sprout.) When I ran out near the end of the toe I just left the ends dangling and ran them into the back of the knitting later after grafting the toe stitches. You can’t really feel either of these joins on your feet.

That’s the third pair finished since New Year’s. Now it seems weird not to have socks on my needles. Instead of immediately casting on another pair, I’m trying to finish my Twilight Queen wimple. I’m nearly halfway up at the moment, so I’m getting there. I was kinda cranky today because I felt kind of dizzy again this morning but it seems to be somewhat better this afternoon. I’ve got an organic chicken in the oven and veggies to shove in with it so supper is taken care of. Guess I’ve got nothing much to feel *&%$ about at the moment.

Nice socks and very pretty color.
Random thing: I linked here after looking for the definition of godets vs. gores.
Thanks for clearing up the confusion (it's still about as clear as mud though).
Have fun knitting!