So did you catch the total eclipse of the moon last night? Too wonderful! We missed the first part but managed to catch it just as the moon was sliding out from under the earth’s shadow. It was hard to photograph and I had to use a tripod. It took 14 seconds for the shutter to close! Here’s sorta what it looked like: 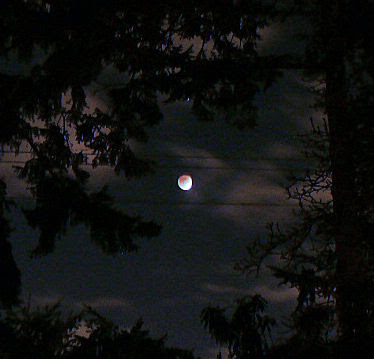 And a closer view with it zoomed out as far as the camera will go:

There was intermittent cloud cover which made it difficult to catch the whole thing but it sure makes you appreciate the infinitely complex workings of our universe!

Next I thought you might like to have a look at the Tulip Socks for Milady Daughter. I enlarged the original chart, which used to look like this (scroll down) and now looks like this: 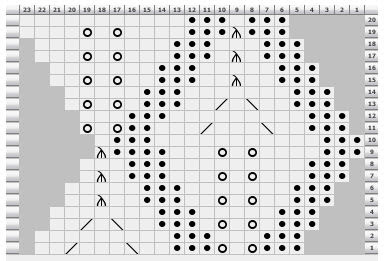 From the original stitch count of 64 (the tulip motif times 4) which fits me, the extra stitches increase it to 72 which hopefully fits her. So far they look good: 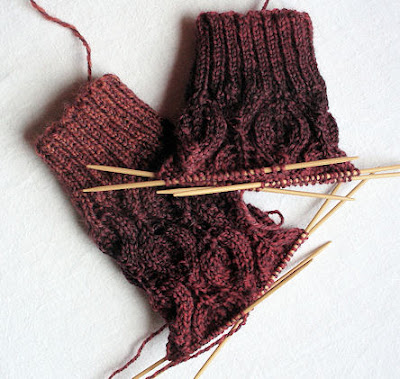 To be on the safe side I’m also using 2.25mm needles for the leg part just to make sure it’s stretchy enough. I’ll reduce to my usual 2mm needles for the foot so it’s not too loose there. The tulips look quite nice set off with a bit more reverse stockinette. It doesn’t change things much however which is good because I liked the pattern the way it was. This is exactly the same yarn as I used for my socks too. She said she liked the yarn as much as the tulips so now we’ll have mother and daughter versions. Heh.

Changing the subject entirely, I’m a big Dr. Who fan. Not so much the original series but the more recent version. We discovered a spin-off from it called Torchwood (which btw is an anagram of “doctorwho”) and I have to say it’s even better than the show it sprung from. We missed all but the last two episodes on TV so we bought the DVD collection of Season One. Totally worth the money. My kids are going to love it when we finish watching and lend it to them! If you haven’t seen it, it’s darker and sexier than the series it sprang from. It takes place in , , at another Torchwood facility (the main one blew up in an episode of Dr. Who) and the five-person crew’s job is to save mankind from alien incursions. Apart from the fact that I want to knock some sense into their angsty little heads occasionally, I love enigmatic boss Captain Jack Harkness and the storylines are really different from what you might expect. If you like British murder mysteries with sci-fi icing on top, this might be right up your dark and stormy (with eyes and teeth) alley. Can’t wait for Season Two.

There’s a weavers’ guild meeting this evening with our speaker Felicia (Sweet Georgia) talking about photographing your work. This should be interesting but first I have to get through the executive meeting beforehand. Good thing for my knitting. At least I have a thing or three to report on about our website in between stitches.

Why is it called a “self-cleaning” oven if you still have to set it and turn it on? Yeah, I finally remembered to do that. It’s been awhile.

I am also a HUGE Torchwood fan. I refuse to read anything about it til the season is over though because the Brits are 2 weeks ahead of us in the series. I loved Christopher Eccleston as Dr. Who and Billie Piper as Rose ... David Tennant not quite so much, though I think he is "easier" to get.

Me too! I love Christopher but he's rather a serious grumpy sort - not sweet like David. And don't tell me you can get Season Two of Torchwood. CBC only carries it long after everyone else has seen it! They just finished showing Season One.