The House That William Built 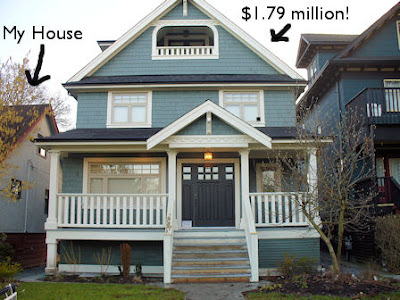 I forgot to mention earlier that we went to the Open House next door just to see what the inside of the house looked like. This is the one we’ve been watching for nearly a year and a half, from being torn down to not much more than the foundation and four one-storey walls and then built up again to a two-and-a-half stories with basement suite.

Did I mention I was wrong on the price? They want $1.79 million. After our little tour we think it’s totally not worth that much even though houses around here — or should I say the land — has risen to ridiculous heights in the last year. Why do I think it’s not worth the asking price? There’s nothing particularly remarkable or special about this house. It’s on a regular-sized city lot (ours is much bigger but our house is old and much smaller) and the materials and design are totally ho-hum. The only thing that we really liked was the shower on the second floor. Now that was some shower! Double-sized with jets and rain and all the bells and whistles. To die for. Everything else, not so much.

The main floor has a large living room, a dinky coat closet and an alcove with a built in desk to serve as the “office” or computer corner. Totally inadequate. My computer desk is about twice that size and we’re a two-computer family. (His is in our bedroom. On another desk.) There’s a small powder room and a mid-sized kitchen/dining room also on this floor. Oh and a broom closet. Not much storage in this house. Odd actually.

The appliances are supposedly “gourmet” but all I saw was some mid-range stainless steel. A free-standing counter (granite I think) and not a lot of cupboard space. The dining room area has French doors that open onto the very plain wooden deck. That nobody had bothered to sweep or clear the building supplies off for the sales presentation. Tacky.

On the second floor there’s the aforementioned bathroom, a big room with the toilet in its own little space with a door. Pee in private! As well as the great big shower, there’s a claw-foot tub. The washer and dryer are stacked in a small niche opposite the toilet. The sink is a single one with a nice marble counter but there’s not much room for personal items. You’d want some free-standing furniture for towels and such. This bathroom serves 3 bedrooms, none of which struck me as a “master” bedroom and none with an ensuite. The closets are fairly small as these things go with some built-in shelves but with mostly unusable space above the top shelf. Only small items would fit up there and you can’t really get at them easily. See? Not much storage space.

The half floor above this one has two open spaces with sloping ceilings and a skylight, one of which could be a bedroom and one an office or another bedroom. There’s a closet in each. And some little doors to attic spaces that totally reminded me of the ones in my house but smaller. Still too small to be the master bedroom. A queen-sized bed would barely fit and I’d be so jealous of that shower downstairs! The small bathroom up there only has a regular shower. Definitely not as cool. I checked to see how much of my house you can see from this window because it faces our bedroom down below. Hard to tell really. I’d have to see it in the dark with the light on in our bedroom. I think the angle is too acute. Or I’m totally making a curtain for that window.

The best part of this top floor is the “sleeping porch.” (Yes, that’s what they called it in the brochure.) It’s the little balcony under the eves on the front of the house. The one where the persistent pigeons had to be discouraged from nesting by the builders. This is the only place you can see the “view” touted in the brochure of the mountains and some of the downtown highrises. It’s quite a nice sight right now with the dusting of snow on the but wait until the huge old white ash trees on the leaf out and there won’t be much left of it. Just saying.

The basement suite is even more disappointing. They substituted even cheaper materials and appliances and it’s so very ordinary. The small bathroom has no window and just a bathtub with no separate shower. But it does have a closet with the washer/dryer, hot water tank, and hot-water heating system for the whole house in it. There’s two bedrooms and the living room, dining area and kitchen are all one open L-shape. Most of the windows are small and dark and the best light comes in the south-facing door and larger window beside it that looks out into the sunken patio space. Needs some decorating there for sure. It’s just ugly bare concrete. From the east bedroom you can look straight into my basement where my elliptical trainer is. (Remind me — NO workouts without proper clothing!) This suite could be for the in-laws, the nanny or a mortgage helper. You’d surely need a mortgage helper unless you are have lots of money and/or a really good job. But even if I could afford it I wouldn’t buy this house. Good thing I already own the teeny little old one next to it. With the big yard and nice deck. No wonderful magic shower though. Can’t have everything I guess.

BTW, this is my 600th blog post today. And I thought I'd never be able to keep it going...

How much fun to be able to go check it out! Too bad they didn't do a great job remodeling. Makes you wonder who they think will buy it.

600 blogs! WOW! I thought I'd done well to get to 100. Quite the house next door, I agree not that fancy for the price. No doubt it will sell quickly.