Friday was kind of another one of Those Days, at least in the beginning. Or maybe just a continuation of the day before. My friend Beryl picked me up just before 9am and we went off to Port Moody to pick up Beth and then to pick up Susan. As we drove out of Susan’s gated housing we ran over a very hard-edged speed bump and heard something hit and grind at the rear of the SUV. After that, it kept making a very nerve-wracking noise every time she made a right turn. Not good. A carload of ladies of A Certain Age and an unidentified noise in the rear of the vehicle. As luck would have it we were not too far from Beryl’s mechanic so we went back to Susan’s for her SUV and she followed us to the mechanic’s where we switched over, leaving Beryl’s SUV to the tender mercies of the repair guy. One problem solved for the moment at least.

Next we had to find a printer in to pick up our weavers’ guild’s bookmarks that were ready so that some could be distributed at Fibrefest. With some direction from Beryl in the back seat, Susan found the place and Beryl and I went in to pick them up. And paid over $1000. Which the guild will reimburse but it’s a good thing Beryl’s credit card had a large limit still available. She had to go fibre shopping still or what was the point. Then it was on to Abbotsford and the Ag-Rec.

After I gave Susan a bum steer (correct turn-off but one intersection short) we ended up on a lovely country road in the middle of cow-pie heaven. Luckily Beth knew where she was and after a very scenic drive we made it at 11:40am. A mere 2.5+ hours door-to-door. No big deal.

I’d been to this particular venue on a number of occasions in the past. We used to have a yearly Sheep Fair there many moons ago and I’ve also been to the Rock & Gem Show. It’s a much better size for the Fibrefest than the huge Tradex building. On the down side there’s less space for classes and no proper food concession. They had a caterer park their van outside one door but I was smart and brought lunch and a big thermos of tea with me. However for those who were hoping for a holiday from cooking for themselves, the food was barely adequate.

The vendors filled the hall with generous amounts of space between but it seems as if there were a few faces missing from the usual roster. The earlier date conflicted with other pursuits and I know several folks who might have come from farther away but were reluctant to trust the weather and the roads this time of year. I wouldn’t say it was crowded with shoppers either though I saw some overflowing bags being carted around. The focus this year was on yarns, both for knitters and weavers, and on hand-dyed and specialty fibres for spinners and felters. Lots of bright variegated colours in both fibres and yarns. I usually buy only natural undyed fibres or maybe black which is a harder colour to get without using a lot of dyestuff. But all the colours available were heaven for those who aren’t as interested in dyeing their own as I am.

I’m sure you want to see what I got, right? 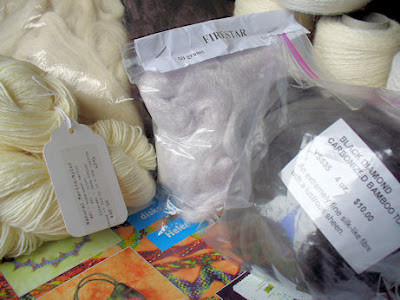 Clockwise from the left:

I was fairly controlled (for me) but since I really only went with 2 cones of the Zephyr in mind you can see that I was at least somewhat affected by some pretty powerful yarn fumes! What I didn’t buy: another one of Houndesign’s lovely spindles. I was sitting in their booth visiting and eating lunch and trying not to listen to the siren song of the pretty woods. I already own 2 of them and since I’m married to a woodturner, I should really hold out for him to actually make me one himself. Someday. Maybe. Hopefully. So do you think this lot will keep me satisfied for awhile?

Yesterday we went out to the stone supplier and picked out 5 pieces of rose and 4 of flagstone gold leaf. The lot cost around $70 and weighed a couple of hundred pounds. We’ve been wanting to replace some of the broken tiles in our veggie garden that weren’t really appropriate for stepping stones but were originally free. I managed to use up all the rose (which reminds me of my favourite red rocks) in front of the greenhouse door. 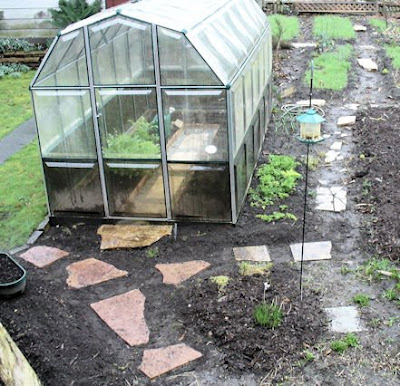 They’re actually prettier without the mud on them! The step right at the door is one we already had and is very similar to the gold leaf. Now I only have 4 more chunks with a large part of the garden still to do so I think we will be making another trip with the van! Meanwhile my right thumb is stiff and sore today from heaving heavy rocks around trying to make them look good and be stable. Later I want to plant some creeping thyme there in the soil between the stones. The bed to the left is where I plant the runner beans, the middle has the overwintered parsley and garlic, and the bed to the right will have the peas this year. It’s just gotten a load of compost on top of the winter rye cover but the peas could go in any time now. Today it’s raining so I get to take a break!

Forgot to mention that Beryl's car only had a bent mudflap which was rubbing on the left rear tire. Fixed including an oil change for $30.

Gee, I'm sorry I had to miss the show this year as I really enjoyed it last time. The earlier date is a bit problematic!
But I see Jane Stafford the end of this month for a workshop and Laura Fry in mid April so it's like the show is coming to me.
Nice when that happens!