Global warming? What global warming? Not only did we have a spectacular hailstorm last evening complete with thunder and lightning, we woke up to an inch of snow this morning. See? 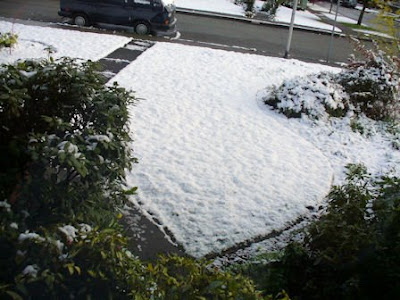 It was wet and heavy and knocked several large branches off one tree and beat another whole tree right down blocking the street just past our house. 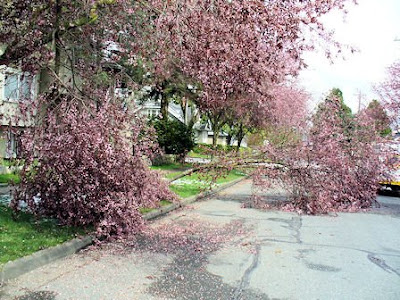 It was fun watching cars drive up and come to a halt right in front of its pretty pink blossoms, slowly realizing they couldn’t go around it and backing up to go down the alley instead. While we were out walking later on we saw several more large branches broken on trees laden with spring flowers. Their beauty was their downfall as the flowers caught the heavy snow until it couldn’t hold the weight. The city came and cleared the pink plum away, poor thing. Hope they replace it with something nice.

During our walk we enjoyed the sun on the snow on our mountains. Every tree was outlined. Here’s a view of The Hole that hopefully will be filled in soon looking north on Cambie Street at 10th Ave. 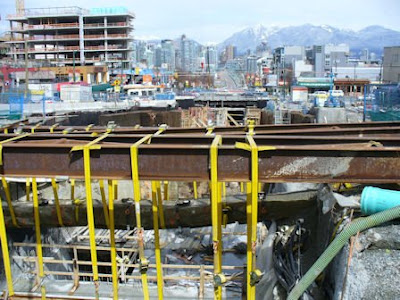 Somewhere in that mess will be an underground station for the Canada Line. You can also see the semi-truncated Cambie Bridge (cars can only drive on half of it at the moment), the intense building going on everywhere, and the downtown skyline with Grouse Mountain behind. The mountains look so serene above the crazy ant-like goings-on down below.

It started out cold but warmed up quite a bit in the sun. We were shedding and unzipping layers as we went. There’s only a tiny bit of snow left anywhere now as it disappeared almost as mysteriously as it came leaving flattened spring flowers in its wake. Hopefully that’s the last of it we can expect now until next winter? Please?

In crafty news, I’ve chosen the beads for the 8 Hearts but haven’t started stitching yet. I also got a few more repeats of the lace edging done on the Unmentionables. Couldn’t stand to listen to it yelling at me anymore. Heh. And there’s a wee bit more than an inch of both A-Maizing Socks now too. Moving right along.