But luckily not right over my house. However it snowed some in Delta and a wee bit south of me here in Vancouver this morning. Sheesh! Our Friday night/Saturday morning snow was the latest ever recorded in this area. So that makes today’s snow even later still. Global warming, schmobal warming. It’s just crazy weather.

I finished one of the 8 Hearts so far: 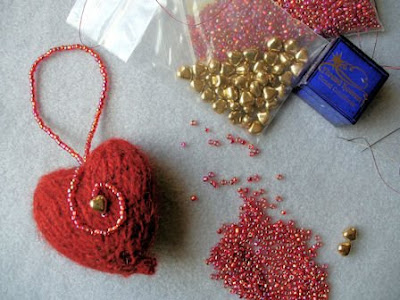 The pattern is the same on the other side so it can be used as an ornament. I think it turned out fine even though it took a bit longer to complete than I’d hoped. I’ll probably get faster as I go. The second swirl was already easier than the first one. BTW, sorry if anyone from my CW Beads & Interlacements study group reads this blog and feels like I’ve spoiled it for them. Let me know in the comments if that’s the case and I’ll be quiet for next time until after the swap is completed.

We went back to the landscaping rock place yesterday and bought yet more stones for the garden pathways. After piecing in some of the old marble slabs (and breaking a few to fit) that we had scrounged a couple of years ago, we’ve nearly covered all the paths with stepping stones: 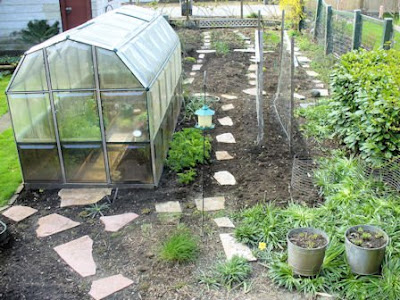 I’m liking the look so far but it will be much better once more things are planted and start to grow. We’re hoping this will do several things: warm the soil a bit with heat given off by sun-warmed rocks, be a better alternative to our chipped wood mulch which was just attracting our current garden nemeses, the sow bugs and pill bugs, and prevent mud from getting churned up in the pathways. We’re transplanting some of the Irish moss from where it doesn’t belong to in between the stones in hopes that it will be happy there and proliferate. It shouldn’t get walked on as much as it used to anyhow. It’s kind of like a child’s game to try to stay on the stepping stones!

Notice the flattened bluebells from the snow around the galvanized buckets holding my madder plants. Those are Spanish bluebells (aka wood hyacinth) and are a major weed in my garden! A pretty one though so we only remove them from places where they are a real problem. They will grow and increase pretty much anywhere, light or shaded and are finished and gone by summer. (You can see why they are a pest in the where they are overtaking the native common bluebell.) We’re really mean to them and pull out the rotting leaves which are havens for slugs and snails and sow bugs. Doesn’t seem to slow them down any. Notice these ones aren’t flowering yet. That’s how late the season is here because they should be in full flower by now. Most of them are blue but we have seen the occasional white or pink ones show up. Hardy to Zone 4.

Speaking of the bugs, we finally found some information in a gardening magazine where a local gardener was complaining about the same problem we’ve been having. She can’t grow zucchinis and other similar things either! And for the same reason: the sow bugs and pill bugs eat them. They ring the plant’s stem, knocking it down whereupon they eat all the rest of the plant. If for some reason the plant survives being nearly ringed, it never recovers enough to produce much of anything. It’s nice to be validated! Every time we’ve attempted to discuss this problem with garden shops and even master gardeners, they look at us like we have radishes growing out of our ears. “Sow bugs don’t eat live plants, only decaying wood etc.” “There aren’t that many of them and they aren’t a problem.” Wanna bet? We can go out and kill hundreds a day and still have them waltzing all over the plants, chowing down on their favourites. We can no longer grow cucumbers, squash, zucchini, or eggplants (they adore eggplants). Tomato stems are fairly safe though they’ll munch on the leaves if they’re touching the ground. We can’t grow lettuce from seed planted in the garden, only from transplants so they must like the really baby ones best. They don’t do too much damage to peas or beans or broccoli. Our biggest pest used to be slugs but these guys have beaten them out and won the prize. I’m still going to try zucchinis and pattypan squashes this year. I’m going to plant them in pots on the deck until they’re huge before I have to put them in the garden. Maybe after they’ve gotten thicker skins they’ll survive. Maybe.

Today I need to do some transplanting and repotting and plant some more seeds indoors. I think I’m going to have to try to plant the woad in pots and transplant it even though it doesn’t like doing that. The garden where it will go isn’t ready yet but I don’t want to wait too long to get it going. We have a long growing season here (well, usually!) but it’s very slow because we don’t have the hot sun and warm nights that other places have. Things can take 2 or 3 times the stated growing times to maturity on the seed packets. It’s our marine air for which I really am grateful — even though I complain a lot! I would about die in places like southern Texas, California or Florida for instance. I don’t do well in too much heat, whether dry or moist. And I hate air conditioning because it’s always too big of a contrast to the outdoor temperature. You freeze when you walk into a big store or mall and then when you go back outside, the heat hits you in the face like a slap upside the head. Though right about now we could use a little warmth around here and I wouldn’t complain one bit. It’s nice and sunny right now. But that could change in an instant.

Have you tried wrapping the stems in tin foil? I've heard of that for preventing squash borers. I don't know if you'd have to loosen it every so often so it wouldn't choke the plant. Freaky -- I've never heard of pill bugs being a problem!

Thanks for the tinfoil idea. I just might try it. I've tried coffee cups with the bottom cut out to surround the plant. It slows them down but the bugs eventually climb over. And then they're in pig-heaven!

Every place is different. Squash borers aren't a problem. Not even sure if we have them here? And the pill bugs weren't here either until maybe a decade ago. Sow bugs yes, but not in these numbers. I'm thinking they were brought in on something and then encouraged by our mulch. Sigh.