"If you always do what interests you, at least one person is pleased.” - Katharine Hepburn

I had this post written but not posted because I was so darned busy all day yesterday and half of today. The weather turned hot so I had to get out in the garden and then of course, T-Man wanted to walk. Today’s second long walk was my own fault but more on that later.

Backing up to Thursday, it only took me a minute of looking to find some really nice metal shank buttons in a copper colour with a Celtic-knot-like design on it. Kind of like pennies but with more interesting designs than queens or dead presidents. They were only 2 for 49 cents! I also got some more small tapestry needles for sewing up sock toes or other thin yarns. I’m always losing them. That was another 49 cents. And of course I couldn’t pass up the huge cones of thread at 99 cents each, so I got 4. They used to be $2.99 but now that they’re running out of stock, they’re even cheaper. They have several different types including Coats Koban (poly-wrapped cotton) in a couple of weights, pure polyester, a Canadian-made poly-cotton in a 24 weight, and a heavier pure cotton. I once even found a waxed cord. The cones are over a pound each and run from 2000 to as much as 6000 yds per cone so they aren’t as fine as regular machine sewing thread. All will be great for weaving, kumihimo or decorative sewing though. This time I got red, yellow, dk green and medium grey. I passed on more only because I couldn’t carry them! The whole bill came to $7.46 including taxes. Can’t beat that.

I sewed 3 of the buttons on my Chocolate Sweater in the bus on the way to my guild meeting. Most of the rest of them were applied during the business part of the meeting and I would have finished except that I couldn’t find the last button card with the last 2 on it. (I had to take everything out of my pack when I got home to find it!) The Program we had was really interesting though so I stopped button-hunting to pay attention. It was a discussion of llama and alpaca fibre by Gretchen Hoff, also known as the Scattered Gardener. Gretchen owns 30 animals from which she gets the lovely fibres that she has processed for sale. She also was accompanied by her buddy Susan Forsyth of woolcomb fame. (I own a blending hackle and mini-combs made by Susan and her husband Andrew.) Susan demonstrated combing llama to rid it of the prickly guard hair. After combing and while the fibre was still on the combs, she pulled off the hairs which were sticking out and ready to be removed. At the end after doffing some were left along with the really short down, vm and noils on the stationary comb. Easy-peasy! Only a very little of the coarse hairs were left in the combed fibre when she was done and it felt much softer and nicer. Later Gretchen used the mini-combs to comb some badly processed baby alpaca where the combs removed a majority of the broken neps thereby saving a crappy but expensive sliver. Very slick. Susan had brought along some of her garments including nuno felt scarves, lace shawls and a little purse knitted out of the llama guard hair. Gretchen even gave out labeled samples of dehaired llama, huacaya alpaca and suri alpaca so that the spinners among us could try them out. Nice to see and feel things in person. We textile folk tend to learn a lot through our fingers. I’ve nearly spun up all the samples so I’ll show them off when I’m done.

For now I bet you wanted to see the full Chocolate Sweater revealed in all its glory, right? OK, you win. Unless you’ve already peeked at my Ravelry page. 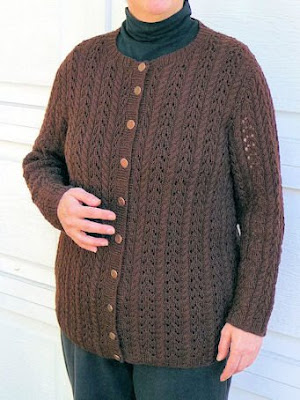 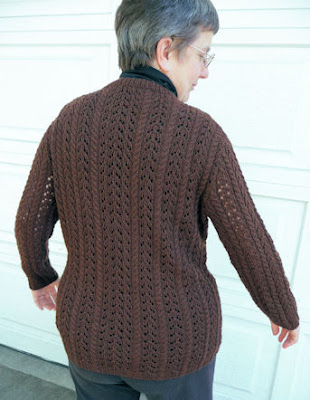 Comments: So glad to be done with this project! It took me nearly a year in total. (After knitting most of the sleeves, the gauge was off so frogged it and started over again.) I spent a lot of time graphing out the various increases and decreases but it really helps to have a visual idea of what to do while keeping in pattern. (I love Knit Visualizer ver2!)

This yarn is at least 15 years old and has been marinating in my stash since I tried machine knitting in the early ‘90’s. It’s a lovely soft cable-twisted 100% merino wool in dark chocolate brown. A bit splitty but not too bad. It does lose its apparent sheen when washed. (In reality that’s the wax added for ease of working on the knitting machine.) And it gets a bit of a halo.

It took me the better part of a day to get it stitched together but it went well. I ignored the pattern and only put 10 buttonholes in. They seemed to fit better with the rib pattern and 10 buttons is plenty. The other modifications from the pattern are that I knit the “selvedge sts” in stockinette instead of garter, I kept the shoulder sts live and joined them with a 3-needle bind-off, and I made the body an inch longer than specified for my size. It hits me better below the blubber! The 3/4 sleeves are just about regular length on my short arms. Perfect.

I found the neckline and shoulders stretching with wear so I crocheted a single line of chain sts across from one shoulder point to the other along the seams. Worked like a charm.

Now I can get on to other things. Yesterday since it was definitely summer-like weather I was inspired to do about 4 hours work in the garden in the morning before it got too warm. I got the beans in and transplanted a few things around. I put my summer squashes in bigger pots but left them still in the house under the lights. I’m not putting them out in the garden until they are as huge as I can get them first. I’m trying to foil the sow bugs and pill bugs from eating through their stems. The tomatoes are ready to go in the greenhouse but I needed to clear the mizuna out first. I gave the bolting arugula a haircut in hopes that will keep it going for awhile longer. Meanwhile I have a huge bag of it in the fridge. Tomorrow we hope to get some more done and it promises to be a little cooler which should help.

Today, however, it’s really hot which inspired us to walk to the Trout Lake farmers market because our closer one doesn’t open until June. It was packed only a couple of hours after opening so it was hard to even get near the booths: 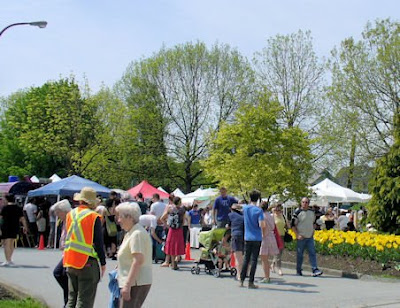 There was a gamelan ensemble entertaining everyone and lots of folks opting for a picnic under the trees. I can’t say I’m particularly fond of the music of the gamelan but the instruments are very beautiful: 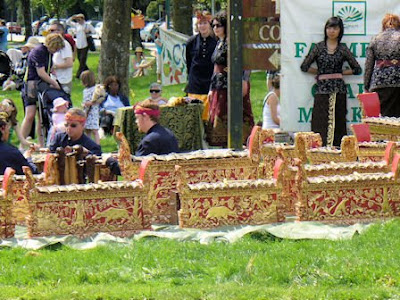 Some popular stuff had been snapped up already from the booths and a long line-up was in front of the organic greenhouse-grown tomatoes. There were lots of seedlings and other potted plants to choose from but couldn’t carry them home so all we bought was some shiitake mushrooms from the ’Shroomy Lady (that’s what I call her!) and some yummy herbed pepper (garlic, cilantro and ginger) from Maison Coté. I’m addicted to it so I try to find Jean-Pierre’s booth at least once a year. He only sells at craft fairs and markets. We took public transit partway home because it was hot and we were tired and hungry. So hungry that we couldn’t get past our favourite sushi place without slipping in the door. Now I’m tired. And full.

Congratulations on finishing your Katherine Hepburn! It's lovely

Your cardi is so beautiful! Well done!