I Haz Code In Da Noz

Of course it was inevitable. I’ve been pushing myself too far and I knew something was going to give. I woke up yesterday morning with a sore throat and by last evening I was sniffling. Even though I was sick a lot last winter I never had an actual cold. Haven’t really had one for a couple of years. Just the Dizzies (3 or 4 times – I’ve lost count), the flu (twice!), and The Cough That Never Ends (and still hasn’t). Although I do feel somewhat yucky, I’m “as-if-ing” and pretending that I’m just fine. That sounds so like my dear departed grandmother. She was always “Fine. Just fine!” No matter what. However unlike her I tend to whine about how crappy I feel anyway.

So in my “as-if” state, yesterday I managed to get more blue wool from the rest of my woad: 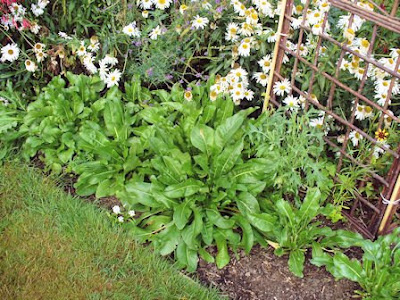 Yippee! This was a little more successful than last time and I got a deeper blue on half as much wool. The proportions were 16 times the woad leaves to the weight of the fibre instead of 8 times like last week. I did everything else (I thought) exactly as last time but the vat had quite a bit more colour in it and it behaved and smelled a lot more like an indigo vat. Perhaps the second bunch of woad picked a week later had developed more blue in it? Or maybe I extracted it better? Who knows. I’m very happy with this: 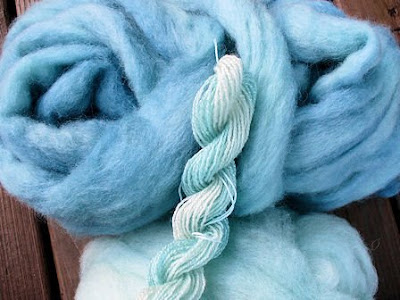 The photo shows the latest blue at the top with last week’s paler and more turquoise batch below. The little skein was the merino/silk handspun that was only the palest blue in the final dip last week but I did a few successive dips this time with part of the skein out of the vat. It’s now several shades, still robin’s egg blue rather than indigo. It’s interesting that only in concentrated form do you get the more true indigo blue but the nearly exhausted vat gives more greenish shades. You don’t see that colour with “real” indigo no matter how pale. Woad has a different composition of dyes.

That was a really fun experiment and now I’ve gotten red (OK, orange), yellow, blue and brown from my own plants, though none of them were particularly intense shades. My own fault for trying to dye too much fibre with too little plant material! I have new and improved respect for those who dyed cloth before the advent of synthetics. Not to mention those who grew the dye plants and extracted the dyes. And while we’re at it, those who grew, processed, spun and wove the cloth. Over the years I’ve done most of those things but I keep forgetting that the general public is much more ignorant of where their cloth comes from than I am. Could explain why I keep things forever and don’t pay much attention to quickly-changing and ever-disposable fashion. You would want things to last as long as possible if you had to create them all the hard way from scratch, that’s for sure.

Today my “as-if-ing” has me cleaning out the linen cupboard and washing blankets and linens, including some of Auntie90’s stuff that I brought home. I will need to assess whether or not to overdye some things that are stained or repair a few holes. And I will have some nice clean cloth handkerchiefs for my sniffles. Little did I know I’d need them so soon! I don’t have a clothesline so T-Man has tied me up a rope line from the walnut tree to the upper deck rail so I can hang out my handwoven blankies to dry and they’ll be fresh and ready to go back on the bed for cool fall nights. (Not yet!) After it dries I’m going to pack away my old handwoven overshot coverlet. I’ve had it on the bed for years and years and it’s got so many pulls in it from the cats’ claws that I can’t repair them all. I can’t bear to throw it out though because it’s got hand-dyed handspun pattern weft and I and 3 of my weaving buddies made it together on a huge loom in 1992 so it’s kind of special. It also gave me the worst case of tendinitis in my wrists for at least 10 years afterwards so you might think I’d be more willing to give it up! Not yet. Yeah, probably my kids will be complaining about me like poor old Auntie keeping everything. Heh! 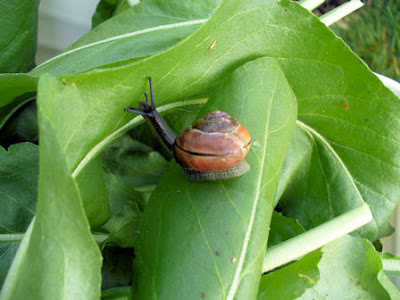 He unfortunately had a leetle teeny accident and is no longer with us. Sayonara, darlin’. Japanese snails do not belong in my garden. I am Godzilla when it comes to pests.