I might be the only person around who isn’t the least bit interested in the Olympics. (Can I even type that word without getting dinged for copyright infringement?) And it’s not just because last I noticed Canada doesn’t have even one single medal. Here in Vancouver, the host city for the next winter version of this international money-grab…er, sports contest, I’m already Olympicked out. I and my children and probably my children’s children will be paying for the sports venues that none of us will ever use. We’ve been stuck in crazy traffic while they upgrade the streets everywhere and build another Skytrain line (mostly underground so Sewer-Rat line would be more appropriate) while we still won’t have enough public transit and there’s still too many cars on the bumpy roads. If this is only a fraction of what those poor Beijing-ers had to endure, then I’m totally sympathetic. The only way regular folks (there or here) will be able see the events will be on TV like the rest of the world because tickets are extremely expensive and limited. Not that I’m interested in watching a bunch of overachievers (who aren’t on enhancement drugs, uh-uh, nope) skate/ski/run/throw/twirl .00002 seconds faster or prettier than the next guy. I’d rather watch raindrops fall or flowers grow. They can do it faster or prettier too. And I get to judge. And award the gold medals too.

Even the opening ceremonies at the Beijing Olympics had some parts faked with CGI. How do I know the sports aren’t also? I just can’t bring myself to care who wins. The whole point is pulling in money which mainly goes to a few while costing everyone else their peace and sanity and a whole load of personal cash to support the spectacle. Plus I’m truly unhappy with the Chinese government’s performance both internally and internationally. However that’s not why I’m not watching the TV avidly or even participating in the knitters version, Ravelympics. It’s mostly because as I get older, I get even less interested in competition of any kind. So what if somebody can do something better than someone else. Big deal. If you really want a challenge, why not do better things for the world. Something useful, kind, innovative, caring, helpful, sharing. Save lives, clean up the environment, cure Alzheimer’s or cancer, find a way to treat the mentally ill and drug addicted or whatever. Knit a blanket or a hat for someone who needs one. Or even clean out your aged auntie’s basement. Running around a track fast doesn’t accomplish any of those things. It’s just air displacement.

OK, my flameproof suit is on. Fire away! This likely won’t be the last of my complaining about this subject. We still have a year and a half until February 2010. I’ll need to stock up on projects and groceries to keep me peacefully in the house for those particular weeks. Though I could rent out my house for an alleged $5000 per week or at least that’s what somebody is asking for their house for 2010. Must be much nicer than mine. Maybe even has more than one bathroom…

And if you haven’t seen it yet, check out this fabulously funny post on the Olympics from the wonderful Mason-Dixon Knitting.

Meanwhile I’m starting to get over the sniffles. I’ve used only cotton hankies instead of Kleenex and feel very green about it. And speaking of green things, the woad is growing back something like 3 inches per day! If I had time I could do another blue dye session before we go away on holiday. But I probably won’t. Maybe when I get back because I should be able to harvest until October, though it supposedly doesn’t have quite as much blue in it by then. You’re supposed to be able to get several harvests from the plants from late June to early October, with the first and last being lighter and as many as 3 in-between ones giving the most colour.

Also green is T-Man working from home today to save a bit of gas and commuting time: 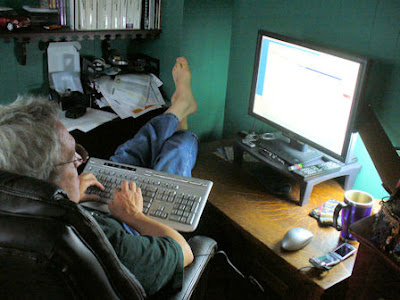 Doesn’t he look like he’s working really hard? Love the bare feet and comfy position in his big leather chair. Don’t think he gets to do it that way at the office, hey? Actually he works even harder at home and barely takes a break for the full 8 hours. He’s really lucky he has the type of job where he can telecommute sometimes. My job on those days is to keep him supplied with food and drink at his desk. And later to vacuum up the crumbs. Somehow I think I get the better part of that deal.

I'm totally with you on the Olympics. No press freedom ( already one UK journalist has been arrested ). No improvement on human rights. Too much money on a fleeting moment in history and not enough spent on the things that really matter.

Me, I'd rather sit with my knitting and listen to the Scottish football/soccer games on the radio. They are a much lower budget sport !

I'm not a fan either! I agree that too much money, too much disruption & too much importance is connected with the games. But, we didn't have anything to say about the Expo cost & disruption, what makes you think we get a say now??? It's more than time to get out of the Lower Mainland & out of this congestion!!

I did join the Ravelympics for the fun. Gail kind of shamed me into it. And I don't mind friendly competition - especially in the WIP event - I mean who hasn't got wips laying in bags & bins that should be finished??? Hmmmmm????