Pink Gives Me The Blues

Don’t get me wrong, I totally believe research on the treatment and cure for breast cancer is extremely important and a very worthwhile charity to get behind. But if I see One. More. Stinkin’. Pink. Ribbon. I’m going to scream! Every freaking thing is pink. Everything a woman might want has an “awareness” version with some portion of the price (often only a minuscule token amount) ostensibly going to charity. But why should they blatantly use this charity to market their goods? Because that’s what it comes down to, marketing and nothing more. Do I know which exact cancer agency the funds are going to? Do they even state what percentage of the sales is actually getting there? How do I know my money is going where it will do the most good? Why won’t people donate without having to have some merchandise in return? Too many questions; not enough answers. If I wish to donate to cancer research I plan to do my own research first. And then give them my money directly. Besides, pink is NOT my colour.

Back Home Blues Socks
For T-Man Comments: I started these socks the day after T’s birthday a few days after we got home from our September vacation. Which explains the title! I liked this yarn a lot because the colours were subtle and segued gently so I didn’t have to match anything. A lot like a handspun yarn actually. T now has plenty of socks in his drawer which may or may not stop me from making him more of them. I have sock yarn and I know how to use it!

Next on my list for socks is my granddaughter, Princess Pink, who is growing out of all her granny’s knit socks. I had the chance at Thanksgiving to measure her foot so I’m sure of the size now. Just have to cast on.

Meanwhile I haven’t touched the Seaweed Shawl since the meetup on Sunday. Instead I’ve been weaving on the remains of the woven shibori sample warp that was left on my table loom. I think there’s something near 2 yards left so I’ve been weaving with what I hope is overtwisted wool. It doesn’t have a label on it because of course I’m going to remember several years after I bought it what it is! I’m hoping for a scarf out of this but you never know. It’s rather tedious weaving what is mostly plain weave but threaded on 12 shafts (because they were there and I didn’t have to move heddles around). That’s a lot of levers to flip up and down just to weave an inch of this very fine yarn, like sewing thread nearly. My beat is a bit wonky because you can’t so much beat as gently press it into place. I want it light and it probably should be even more gauzy than it is but so be it. I’m determined to get this warp off the loom. ASAP. I have a commitment to weave something or other with beads in it and write it up for the Complex Weavers’ Journal. By December 1, no less. Wish me luck because I have no idea what I’m going to do yet.

Also meanwhile I have some old handspun vests I want to felt up in the washing machine. One of them will perhaps be used for a protective tote bag for my baby laptop, Bluet. I’m not sure about the other one. Depends on what it looks like when it’s done. Right now it’s about the crappiest handspun yarn I ever made and the knitting is circa sometime in the early 1980’s. It will be a blessing to put it out of its misery.

Off to the washing machine. Then while the wool is drying I’m determined to finish the last little bit of weeding in my veggie garden. I was almost done when it rained hard on me yesterday afternoon. See the rainbow that nasty rain created? It was a double but I’m not sure you can detect the echo in the photo. 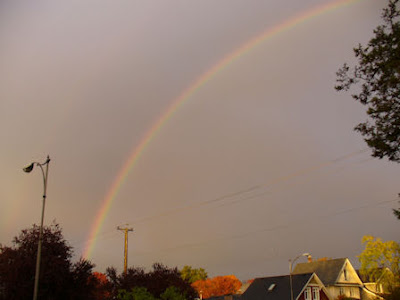 I agree with you!! The last time Safeway asked me if I wanted to contribute & said NO - I'll donate produce to the Food Bank! I think the Pink thing is being flogged to death, time to give it a decent burial.

My Hubby says that men deserve equal time on a cancer cause as well. I agree with him. But I guess it's hard to make a prostate 'sexy' for promotion :)

I would much rather see $$ going to a general Cancer fund and then divied up to all studies. 'Equally'
With maybe a touch higher going to children's cancer.