So I’m pretty sure I have strep throat but of course it’s too late to make an appointment to see my doc before the weekend is over. By then I should be getting better. (I hope!) Really the only reason to go to the doctor with strep is to get antibiotics which don’t really help the throat much but they do render one non-contagious within a couple of days. As opposed to being contagious for a couple of weeks after one already feels better. I’ll wait and see whether I feel like going through the old antibiotic thing. I always feel worse before I feel better and the last time I got a thrush infection to boot. Good thing I didn’t go to Spectrum yesterday anyway. Not nice to pass germs off on dear friends.

While I wasn’t there, my Spectrum buddies decided to take an online class through Joggles.com. This one is Studio Journals: A Designer’s Workhorse with Sharon Boggon. We plan to delay starting until January which is fine with everybody, though when the class actually starts on October 23 we’ll download the lesson PDFs as they come out. Seven of us (plus another friend and guild member who isn’t a member of Spectrum) have already signed up so I guess we’re committed! I was a wee bit hesitant at the US$60 which might have paid for 2 or 3 whole books on the subject, but didn’t want to be left out so I went for it. Could be interesting to take my journal in the direction of spinning, dyeing and knitting rather than paper/fibre/mixed media stuff or stitching/quilting like I know sharonb is into. I love her work but it’s not me. I hope the fact that some of us are beginning late and won’t be able to take full advantage of the forum and feedback offered isn’t going to be a problem for the class. I would hate to see the other students miss out on the social aspects with the bouncing around of ideas and seeing how others solve problems etc. It’s not so important to me. I’ve taken (and taught) so many workshops of varying types over the years that I’m a bit jaded and I never do my best stuff in a class situation anyway. Too many distractions! I just need to sit down in my studio and do the work. Right.

On another subject entirely, I was surprised when I picked up my copy of Interweave Crochet to see someone I know personally in there! (I mean, besides Kim the Editor who was once one of my students.) In the photo, Maureen is spinning though I usually see her every year at Fibre Fest running around solving problems and sorting things out with her lovely smile and cheerful attitude. How nice that this magazine has developed a local flavour thanks to Kim and I love seeing spinning in a crochet mag. Heh!

Speaking of spinning, the Fall issue of Spin-Off is also out and it’s a keeper. The comparison chart of all the current spinning wheels is brilliant. It might help someone decide what wheel to buy – or then again it just might complicate matters considerably! Only one of my wheels is included, my Louet Victoria, but that’s because the others are no longer being made. The chart would be immense if they started adding all the old wheels that might be available second-hand. Hope they eventually do the same with other equipment like drumcarders. I’m seriously wondering if I need to get another one that will handle finer fibres than my oldie-but-goodie no-name (probably a Patrick Green but without the sheep brand).

There lots more goodies in this issue too including Judith Mac-Mac’s article on washing wool, samples and swatches of the different pygora types, the 40th anniversary of EZ’s Baby Surprise Jackets and more more. I would like to mention that I would have preferred the several lace patterns included to also have charts as well as written instructions but that’s just me. So much easier to follow a visual chart than lines of abbreviations. I do love the Project Notes boxes with a lot of details about how the yarn was spun. I don’t usually keep such detailed notes about my spinning but guess I should, hey?

I’ve got loads of other books and magazines I could review here. Hopefully over the next while I’ll get to at least some of them. To conclude, here’s a nice sunset from Humbug State Park in Oregon south of Port Orford. A whole bunch of folks came out to the beach from the campground to watch it and it was quite a party. Definitely worthwhile view. 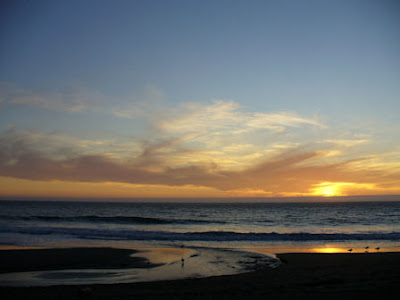