Is It Monday Already?

Hello. Are you wondering what I’ve been up to this weekend? Well. Saturday I lazed around all day feeling bleh. It’s so nice to have my little Bluet “laptot” (love that term) so we can sit comfortably together in bed with warm blankets and pillows and still be able to work, read email and get online. Decadent, totally. Or it would be if I felt better. But if I was healthy, I’d feel guilty for hanging out in bed all day. Sheesh. I’d better get over that guilt fast. It was also raining so that probably contributed to the urge to hibernate.

On Sunday I went to help my friend Marian jury her craft fair that will be on December 6 & 7. It was exhausting but it went well, all except the last part when a couple of people who were not accepted felt bad enough to try to take it out on us poor jurors. The other two are much better at fielding unhappy enquiries but I didn’t handle the ones I got very well. How do you diplomatically explain that ya wins some; ya loses some and it doesn’t have all that much to do with whether your work is good or not. There are only so many tables available and a range of crafts are desired so whittling down to about 1/3 of the number of submissions is particularly hard! (Especially when the jewelry category has so many applicants – competition there is fierce.) Some stuff was easy to reject (can you say “church bazaar”?) and some was obviously really well done but the three of us jurors had some rousing debates over the fair-to-middlin’ ones. Luckily three jurors meant there was always a tie-breaker. It’s kind of fun but surprisingly stressful. Not to mention hard on the body from standing for about 6 hours with only a short lunch break. Anyway, glad that’s over for another year. 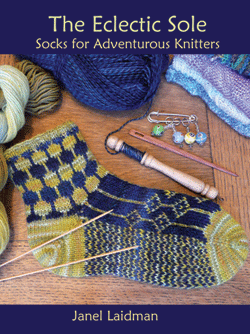 So, what else is new? How about another review, maybe a book this time? The Eclectic Sole by Janel Laidman is one I got while I was on vacation. Subtitled “Socks for Adventurous Knitters” it’s self-published and a bit hard to come by in the wild (so to speak) though several sources carry it online if you can’t find it at your LYS. There are 14 original designs here that were originally developed for a sock of the month club and they are quite a diverse and lovely group of socks with lots of different techniques used in some unique ways. Even the ones called Simplicity don’t look simple but the pattern is very straightforward. The most famous design is probably the gorgeous Rivendell socks and the pattern has been made available as a separate purchase for download. It doesn’t hurt that the Yarn Harlot has knit and approved it! But there are many other designs worth considering. Janel has a particular flair for colourwork as evidenced by the Northern Lights socks and the pair on the cover called Migration. There are even socks knit sideways (April Fools) and partially sideways (Monterey) just to get all the angles in. They aren’t quite as innovative as Cat Bordhi’s socks but they are quite a ways beyond basic.

What I like best about this book is the text and charts are large and clear and there are lots of good photos of the socks both flat and on a foot. Janel included a techniques section in the back with lots of pictures along with the abbreviation and symbol key. A personal quibble but many of the socks seem short to me. It would be easy enough to lengthen the leg. I like my socks long enough to show at the top of my Blunnies! At US$23.95 for a copy, it’s a bargain for so many knittable sock designs. My only problem is which one to start with when I’m done the Back Home Blues Socks?

Since it’s pouring rain out right now, I thought I’d leave today’s reality and go back to some of my holiday photos from northern California. Here’s the moss on a bigleaf maple tree in the redwood forest: 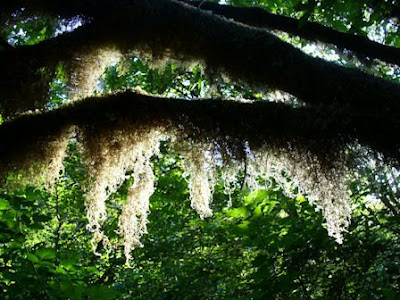 This is a succulent plant that grows in the coarse sand just above the highest tide line called sea fig. It has red-violet daisy-shaped flowers in late summer but I’ve never seen it in full bloom. Only one or two stragglers. The 3-sided leaves turn lovely reddish colours late in the season though so it’s still really attractive in September. 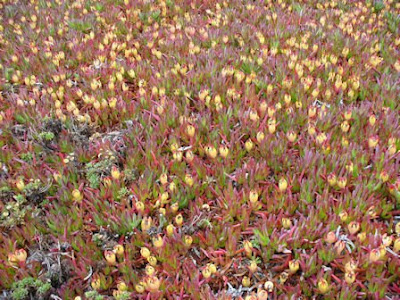 And this shows these honeycombs in rock called “tafoni” that are covered at high tide. To give you some idea of scale, I could put my fingertip in each cell. Other rocks had larger or smaller or varied patterns. The shapes are really interesting. Go here for more than you probably want to know about this type of rock formation. 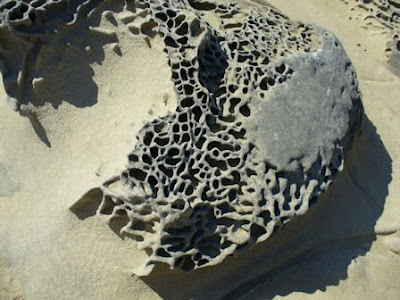 Thanks, hon'! I do have fun with my digital camera. I'll try to remember to post some more of them. Eventually I want to put them all on my Flickr site but I haven't done it yet.