So what does this old damselfly have for you today, my little water striders? I have 4 finished boy-socks: 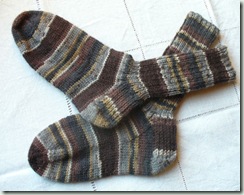 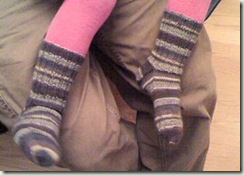 Comments: Made 4 socks from the ball and didn’t care where they began and ended in the yarn patterning so they’re kissing cousins instead of matching. Fit well but only a centimetre or two of growth room. 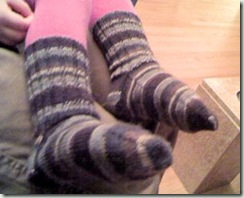 Grampa’s cellphone shots of wiggling feet on daddy’s knee. Pay no embarrassing attention to the fact he’s wearing his sister’s pink tights. His own pants fell victim to a slight, ahem… accident and these were the only spares available at the time. (And it’s a good thing his face is not visible because then he can deny that this was him when the photographic evidence come back to haunt him later.) These are the first pair of socks I finished. Top photo is the second pair. The colour is more accurate in that one.

I’m also nearly finished the first of another pair of legwarmers for Princess Pink. She said the first pair was itchy but then wouldn’t wear them over her tights to avoid the itch. Obviously the horse chestnut component wasn’t doing it’s job and it was probably used to make the yarn feel softer because the wool was coarser than it should be. This time the yarn is a new one for me: Confetti 100 Stretch in superwash wool, nylon and polyester (to add the stretch). It feels rather firm and not particularly soft either so we’ll see if it meets with the Princess’s approval – or not. I plan to finish with hair conditioner or maybe fabric softener if I can find a small bottle without scent. (I don’t use it normally so I don’t have any in the house.) Might help at least for the first crucial wearing. So far they are further along than this: 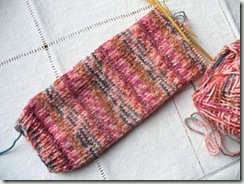 No, it’s not completely pink. I think my teeth would fall out with the sweetness if I had to knit too much more straight-up unadulterated pink! It did meet with the royal recipient’s approval though. Which may or may not suffice. Royalty reserve the right to change their minds at any time.

Neither of these projects is really the photo shoot in the post’s title though. Yesterday my fellow weavers’ guild member, Dawn, came over to get my help with photographing her handwoven wrap for a gallery show. We had a wild time out on the back deck with a vintage flannel sheet backdrop, a skinny little dress manikin on a wobbly base, a little black dress, her lovely shaped wrap in creamy silk and paper yarns and natural light that fluctuated by the minute from sun to cloud and back again. Whew! We took some shots and then went in to look at them on the big computer screen. Close-up detail shots fine but full-length ones were sucky! Back to the outdoor “studio” and more fiddling around. Good thing our model was patient! I finally got two full shots and two details that are (barely) passable. Not exactly professional but what can you do when you don’t have the professional equipment? I still have to fiddle with the sizing and burn the files to CD for her. In return I get to go have tea with her at VanDusen Garden where she works. Fun!

Today I have to buckle down hard on my lecture work. Time’s a-wasting and I’m not nearly ready yet. I only have until the 18th of February and it’s coming like a charging rhino. I’m outta here.