The Good, The Bad & The Rather Ugly

I went to see Dr. Serious Dermatologist yesterday for a follow-up visit a month after our first encounter. After dithering hither and yon on this for the better part of a year (fungus infection? contact dermatitis? eczema?) I have now finally positively been diagnosed with psoriasis. Bleh. I have also been given yet another three different medications/creams to apply to my soles and palms along with tapering off the last one. This is getting silly really. My feet are better cared for than the entire rest of my body.

I’m of two minds about the psoriasis diagnosis. On the one hand, I don’t have to change my diet – apart from laying off on my usual vast amounts of our delicious homemade wine. (The side effect of this partial abstinence will hopefully help to reduce some of the excess fluff that has reappeared around my middle.) Apparently the reason why I couldn’t definitively isolate a particular food that caused the itchiness was because food allergies apparently don’t really play a part in this disease. It was just a coincidence of flare-ups matching certain foods and I was trying to find a pattern where one didn’t exist. The good news is I can eat anything I want.

The bad news is that this is a chronic recurring problem that has no permanent cure. It can be managed though. And I have to be thankful that a) it could be worse and b) it could be on some more obvious or annoying parts of my anatomy. It’s already looking almost-normal although it’s still somewhat itchy and heat sensitive.

The pharmacists are having a good time too. They couldn’t fill the two prescriptions Doc Serious-D gave me because they have to order in the first one and compound the second. You’d think they’d enjoy the change from pill counting to mix up some old-fashioned tar ointment for me, wouldn’t you? And I guess there isn’t much call for something called Dovonex, which is calcipotriene, a synthetic vitamin D3 derivative. It’s supposed to be an alternative for the very strong corticosteroid I’ve been using which can become less effective over time. If you alternate you avoid resistance issues. It’s specific for psoriasis and no other condition. At the same time I have to taper off the steroid ointment or risk a rebound affect. See how much I’m learning? I also have to use a urea cream and I know from my dye experience that urea attracts moisture and helps to keep things from drying out too quickly. One goo on top of another on top of yet another! Are we having fun yet?

Enough of that stuff! I have a Finished Object to share that’s actually been done for awhile: 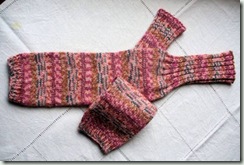 Mods: Like the first pair, I made these in a single sock yarn on 52 sts, knit 10” plain, 2/2 rib cuff to 5” (could have been an inch longer but didn’t have the pattern with me and forgot!)

Comments: It’s kind of a stretch calling this colourway “pink” since it only has a bit of that in it but it was ok’d by the recipient in the ball. I hope these are more acceptable to Her Highness than the Candy Legwarmers were! I washed them in conditioning hair shampoo to soften them. But I’m not holding my breath.

I’m also nearly done her brother’s Blue Blodgie’s Sweater and got a good start on the new socks for T-Man. I’m beginning to get a little panicky about my guild talk however because I blew the whole day yesterday (though the lovely sushi lunch I had with Milady Daughter was very nice!) and this one also seems to be filling up fast with other things. I have to go pick up the magazine I forgot at Three Bags Full, my LYS, and, in the total opposite direction and only if they have it ready yet, I have to go pick up my prescriptions. I plan to do this walk in two stages with lunch at home in the middle. Otherwise it’s a long slog. At least the sun is out! A lovely early spring day. I need to open the greenhouse!

Medicine is great, but it can certainly be a pita, can't it? It's good to have a diagnosis, though. Now you know what you're dealing with.