I was really enjoying yesterday’s sunshine. There was a patch of gorgeous purple crocuses that have naturalized themselves in drifts on the edges of the sidewalk a block or so from here and they lifted my heart when I walked by. Today is drizzly and dark. Much more normal February weather though it’s still unseasonably mild. My feet just about toasted last night in the socks I was obliged to wear after plastering them with the new tar ointment. It stinks pretty bad and brings back memories of when we were tied up to the public wharf in our little sailboat many years ago. The pilings were coated in protective thick black tar that smelled just like this stuff. I’m surprised I didn’t dream I was sleeping on the boat! At least I was smart enough not to bother putting the tar ointment on my hands. Can’t imagine how bad it would have been under my nose all night long. I decided my palms don’t need this stuff. So there, Doc Serious-D. Luckily I don’t have to use it during the day. Can you imagine? Ewwww… 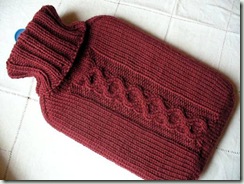 Mods: Cable substituted with Elongated Chain Cable from Walker’s Third Treasury. Began with Judy’s Magic Cast-On.  Added one extra increase round to 72 sts and one extra dec round to 52 sts.

Comments: This hot water bottle (Life brand) is slightly larger than my orange one (and didn’t come with such an interesting package of instructions!) It was given to Stargazer by his grandmother Judith to see if it would help with his leg cramps. Of course his mom wanted a sweater for it like the one I made for mine. The first yarn I bought (Smart superwash tweed) was too thin and too harsh for this project so I tried the softer merino yarn. Had to be superwash though! And it took the better part of all 3 balls so this is one pricey blodgie sweater. Hope it works for the intended purpose.

I hadn’t used this yarn before and I found it a bit splitty and hard to make an invisible join. Unfortunately one join is right in the cable which I thought would disguise it some. Not so much. Oh well, this is a utilitarian item so if it isn’t perfect, nobody will really notice. It’s really soft anyhow.

Back to my lecture notes. Nearly done. I hope.