Since we’re paying for these festivities we decided to partake of just a little taste of the excitement downtown. So yesterday T-Man and I left around 10am to walk down across the Cambie Bridge to see what was happening. Here’s our front door in its festive garb: 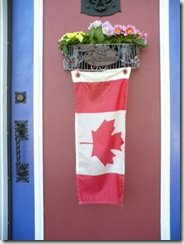 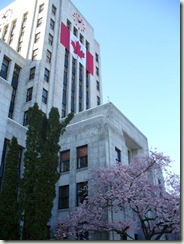 Their flag is somewhat bigger than my flag! The weather was glorious and we soon realised that though we thought we had dressed fairly lightly, we were still wearing too much clothing and not enough sunscreen. We ran into more and more crowds as we walked over the bridge, many heading to the first of the day’s 3 hockey games. Red and white clothing, flags and face-paint everywhere.

We continued on, passing line-ups for Bell’s Ice Cube, and decided to go into the Aboriginal trade centre in the Vancouver Community College building which had many booths full of impressive artwork. This one particularly caught my eye: 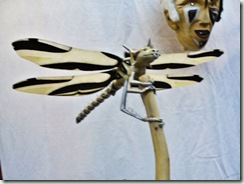 A humourous dragonfly by Daniel Tom. He kindly allowed me to photograph his piece, made from stone, shell, wood, and aluminum. It’s 16.5” from nose to tail and worth $12,000! Urp. I’m glad he didn’t underprice his work but he admits he can’t afford it either. His other pieces were very interesting also including a hot “Vixen” which was quite arresting as I walked up, before I noticed the dragonfly. I always appreciate art that is unique but not pretentious and his somehow hit the right note for me. Some of the other stuff there tended to be somewhat trite. Though not a pair of these that T-Man nearly purchased. (The buzz was too busy in front of this booth.) He might still!

Where was I? Oh yeah. We continued on down to the waterfront where there were already lineups to get into Deutcheshaus (Germany House) and the crowds were thickening fast. By the time we passed the Pan Pacific Hotel it was crazy with people: 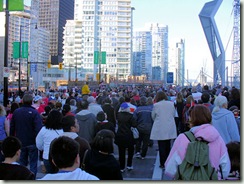 Everybody had their best party faces on and were all having a good time but it was a squeeze to get near the flame: 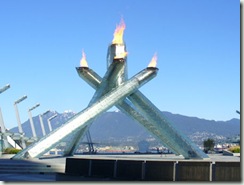 Surprisingly, it looks like cheap tinfoil up close! Much prettier from a distance or at night. There were long lineups to get up to the viewing gallery too so we skipped that and headed back toward Robson Street. I tried to capture the person going overhead on the zipline: 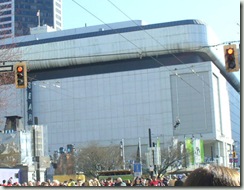 Even embiggened he’s still a dot up there. The lineup for this ride of mere seconds takes upwards of 6 hours! Crazy. Then we went to Granville Street to see the Lantern Trees: 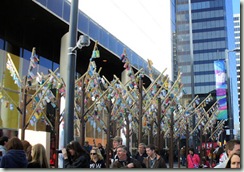 A closeup of all the work the schoolchildren did: 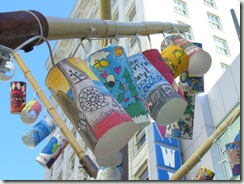 I’d love to have seen them at night when they’re all lit up from within. After watching all the people taking photos of each other in the sports cut-outs (and not succumbing to it ourselves) we walked south on Granville Street to a pleasant-looking seating area in front of a restaurant/pub. Our feet were tired by this point and we were starting to get hungry and thirsty. Here’s T-Man: 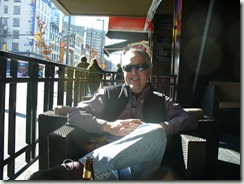 Without his big leather Aussie hat because I was wearing it to keep the sun off my face. Here’s me relaxed: 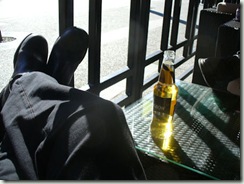 Ahhh. Perfect. We had yummy chicken club sandwiches as well as the English cider (mine) and Mexcan cerveza (his). I shared my fries with him and he shared his salad with me and we were quite stuffed. Not too stuffed to start waddling back home over the bridge, this time on the western side: 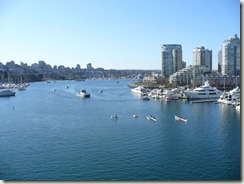 That’s a big police boat in the middle there, with the practicing dragonboats waiting until it pulled in to the wharf alongside that huge yacht on the right. There’s a pontoon barrier just underneath us here keeping boats, except police, out of the inner section of False Creek beside the Olympic Village where the athletes are staying. Talk about security!

So how come it’s always uphill on the way home? We were pretty tired by the time we got back. We passed a lot more people heading downtown, though I guess because Canada lost the hockey game with USA it was much quieter last night. I didn’t even wake up to the fireworks.

Yeah, I know we missed a metric tonne of venues. One can only do so much, waiting in lines is not a preferred option, and not everything is of interest anyway. It was a fun adventure and we were glad we went but we’re back to hunkering down again and just watching stuff on TV. I have to admit that I’ve watched more than I thought I would – while knitting less than I’d like! Good thing I didn’t sign up for the Knitting Olympics, huh? One more week to go.