That’s my new nickname. You could solve the peak-oil crisis with the amount of petroleum on my skin. It’s really quite ridiculous the amount of time and energy it takes to put each different ointment on at the correct time and in the correct order. Man, I have the most pampered feet ever! The frustrating part is my hands are mostly too greased up to knit. And we won’t even mention the amount I’ve gotten on my poor keyboards! Both of them (big desktop and little netbook) are shiny. As are the mice. There’s just nothing like a slippery mouse. Oy.

Meanwhile, I’ve pretty much finished the words for my talk on natural fibres. I need to let it sit for a little while before I read it over one last time. It has to feel less familiar, like someone else wrote it, before I can give it the final edit. I’ve also collected up a bunch of pictures, some better than others, to illustrate each fibre. These have to be put into individual PowerPoint slides. Then I have to dig out all the fibres, decide if I need to spin a small sample or if I have some yarn already in the stash, compile, label and bag each set. Just over a week to go. Better get busy, huh?

But first I want to show you some things. Such as Spring: 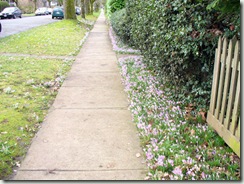 These are the crocuses I was telling you about. Not quite as open since it wasn’t sunny when I finally took the picture. I just love the way they’ve naturalised themselves along several properties and on the boulevard.

And we have more Spring: 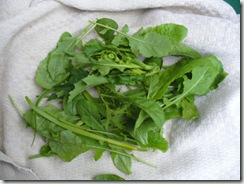 This is the First Garden Salad of 2010. The arugula actually grew in the greenhouse from seeds I planted last fall. There’s also a wee mizuna and a larger gai lan sprout from the only ones to survive the December frosts. Plus a few leaves of corn salad (mache) and some garlic chives. It was all very yummy with some raspberry walnut dressing!

On Saturday we went out to the garden shop to get my seed packets. The shelves were already diminished so the gardeners are getting pretty antsy around here to get planting! They had a sale on phalaenopsis (moth orchids) and I fell in love with this one: 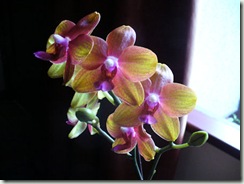 Must be the purple and chartreuse together, huh? Hope I can keep it alive.

What else? Oh yeah. There’s also these: 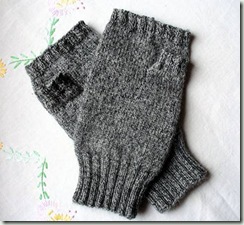 Comments: This project began with a pair of socks that I had knitted in July 2006 for T and where he had finally worn out the feet. There weren’t any holes but the soles were generally thin enough to see through so a number of holes were probably imminent. No point in darning – only drastic measures would work or I’d have to give them the old heave-ho. To avoid that, I decided he needed a pair of fingerless mitts (since I love mine so much). I chopped off the foot just above the heel flap, ripped down the leg until it was a nice length for mitts minus 1/2”, picked up the loose stitches and knit 6 rounds of 2/2 rib before binding off in pattern. I measured down to what I thought was an appropriate place for the thumb, clipped a stitch in the centre of where I wanted the opening and picked out the stitches to either side, freeing 14 stitches. I put each 14 plus an extra half-stitch (picked up one at each edge) on a needle on the top and bottom of the opening. 30 sts total. Joined on the leftover yarn and knit around, decreasing the extra half-stitches by knitting them together with the next st thus avoiding holes in the corners. 28 sts rem. I knit 7 more rounds plain then switched to 2/2 rib for 6 more and then the bind-off. Lots of ends to darn in!

These are not my favourite thumbs. I prefer the ones with proper gussets. Plus I think the thumbs could have been situated down another half-inch or so to leave enough above them to cover more of the fingers. However, T is happy with them and I managed to give a worn-out pair of socks another life. Good enough.

OK. Bye for now. I have to go apply another layer of ointment. Oils well that ends well! Hah.

Wow, you sound very busy. Hope all the slathering of ointments brings quick results. I like your sock into mitt transformation.