Time seems to have gotten away from me again. Where have I been? Thursday, my Spectrum Study Group had a field trip over to Victoria to see the exhibit of Coast Salish art at the Royal BC Museum. This show sadly ended today and we were glad to get a chance to see it before it did. It was really interesting with many examples of historical items such as baskets, blankets, combs, blanket pins, dress, woven mats and much more. There were also contemporary pieces by First Nations artists. My favourite pieces were the spindle whorls, mostly carved from wood though one smaller one was in steatite (soapstone). Some had people on them, one had fish and one looked like a wagon wheel. There were also some beautiful examples of baskets, a particular one triangular to fit in the bow of a canoe, mostly coiled with elaborate designs added by a technique called ‘imbrication’. Unfortunately we were not allowed to take photographs in that gallery. Phooey.

It seems that there are a lot of beautiful spindles around Victoria – seven of them in fact. These are public art works and represent the peoples who lived here before the Europeans came. One was right outside the museum and I’m sorry I didn’t get a photo of it. I did however get a photo of my old buddy, the woolly mammoth: 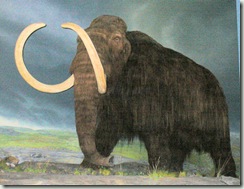 I love him and make a point of saying hi whenever I visit the museum. To give you an idea of scale, I could stand up straight underneath his tusk – if they’d let me in there. I accidentally used the flash while taking his portrait. Oops!

On the way home we had another special event: 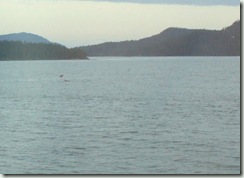 Take my word for it, those tiny dark spots in the water there are killer whales! A whole pod of maybe a dozen went by us in Active Pass while we were eating dinner on the ferry. One of those blips is actually doing a side breach! Very exciting. With all the sailing and ferry-riding I’ve done, I’ve never seen killer whales in the wild like this. Porpoises, Pacific white-sided dolphins, California grays, humpbacks yes. Orcas, no. But now I have!

So with all my travelling I had to wait until Friday to block my shawl:

For: GVWSG 75th Anniversary Exhibit at the Seymour Art Gallery 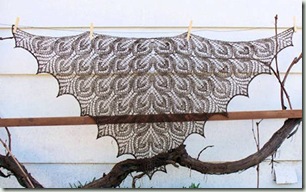 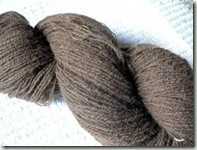 Spinning Notes: Found out this brand is Judith MacKenzie-McCuin's and distributed through Carolina Homespun. (Wild Rose isn't showing any more on their website!)

Z-spun on Louet Victoria wheel with lace flyer using 13:1 whorl. Two-plied S using same setup. Very short and slippery fibre! More like spinning cotton than wool. It got away from me quite a few times when it broke right where it winds onto the bobbin. It usually happened when I dropped my attention momentarily. Luckily the spun bits untwisted back into spinnable fibre because I was not wasting one tiny micro-gram of this stuff! I had to hold the end from the bobbin tightly though or it also broke again while I was trying to rethread the orifice. Tricksy bison!

Yarn was finished with Judith's Yarn Abuse and it held up wonderfully through the knitting and blocking. 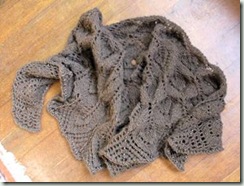 Knitting Notes & Mods: This must be some kind of record! It only took me a week to knit this shawl.

The pattern is quite lovely but the instructions are not particularly clear. Good thing I’ve got lots of lace experience. I did re-chart the main lace to give me a better idea of the pattern repeats. And of course read a bunch of the comments from Those Who Have Gone Before!

I ended up with 6 repeats including the very beginning one, 2 short of the pattern recommendation. I have a mere 7 g of the yarn left so the fact that I chickened out on the one more repeat I’d hoped to get was justified. There would definitely not have been enough! It’s still quite large: less scarf and more shawl than I expected.

Instead of ignoring the centre marker and continuing the border straight, I added a centre border stitch (for beads) and made a mitre in the middle. I like the ‘tail’ effect much better. I also put beads down the centre spine of the border triangles, at the tips of the last leaves and along the whole edge before binding off. (I couldn’t figure out an effect way to put them in the k2togs or ssks.) I used a combination of Evelyn Clark’s (one row k on wrong side, adding beads every other st) and Nancy Bush’s Estonian (with doubled yarn) bind-off for a substantial edge. 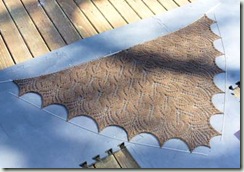 I blocked it on the deck in the dappled sun, using the mats and wires. I left a little curve in the top edge. It seems to be holding the blocking OK so far.

This shawl is so soft and warm and fuzzy! Lots more cuddly than the bison it came from. Heh.

I look forward to see your piece in the gallery. It is beautiful.Lucky you to see whales.

Thanks, Rosemary! I hope to get a chance to see it in the gallery myself! I think the exhibit is in May but I'll post the dates closer to the event.