Drat! Again I had camnesia at an event. I had my camera handy too but I was too busy either chatting, fondling fibres or spinning to use it. It just seems silly and rude to start snapping pics right in folks’ faces. And my hands were full. A lot.

It was a fun day, though you’ll have to take my word for it since I can’t show you! I went with Madame Guild President on Friday in order to spend the afternoon demonstrating spinning and weaving. All by ourselves too as it turned out. We got there early enough for prime shopping and schmoozing before our stint started and we stayed later than we had booked for. Shoppers seemed a bit thicker on the ground than last year and apparently it was even busier on Saturday. It’s hard to tell exact numbers when several classes were in session upstairs. Nobody was complaining though which is a good thing. I sure saw lots of bags of goodies heading out the door!

We had quite a number of people coming up and asking questions about the spinning and weaving we were doing. Much better than last year. I was using both spindle and wheel alternately and Beryl had her inkle loom and was making bookmarks. One woman was researching portable wheels and was running around trying out the Schacht Ladybug, the Ashford Joy, the Lendrum, and a Kromski. I had the only Louet Victoria in the place and was very happy to allow her to try it out and get a good look at how it folds up. I think she ended up ordering one too! I should get a commission from the dealers, hey? Or just a yarn allowance.

Personally, I went without a shopping agenda since of course I don’t actually need anything right now. That didn’t stop me from buying 3 books, some yarn and some spinning fibres though. I got 2 cones of Zephyr wool/silk in vanilla and 4 skeins of 30%-off Louet Gems superwash fingering in cream (both for dyeing) at Jane Stafford’s booth. She is discontinuing carrying the Gems skeins so this was a good time to stock up. I also picked up some blending nylon for spinning from Doug at Laura Fry’s booth. (Poor Laura has a broken ankle and couldn’t make it this year!) Plus I got 6 skeins of Fortissima Socka Color sock yarn at Fun Knits that were on sale for half-price. 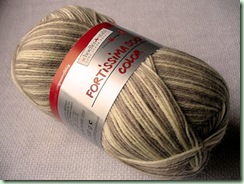 The colourway is boring natural and taupe but it will overdye just fine into something rich and dark. I want to make the Abotanicity tunic (Rav link). It seems to look good on a variety of body types and I am in a “sock yarn for everything” phase right now.

Which brings me to the Pebbles Baby Cardi which I’m plugging away on. Deadline is next Saturday (or Monday depending on whether or not I can get to the proposed baby shower). It’s further ahead than this now: 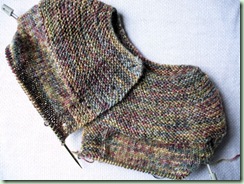 I’m nearly finished the hem and only need to do the sleeves yet. I was hoping to have enough time – and yarn left - to do socks too. Better knit faster! For some reason this colourway is hard to photograph. It’s a bit lighter and warmer than it appears in the pic.

So of course I’ve pretty much stopped working on the Tweedi Cardi with that baby-thing deadline looming. I’m nearly down to the hem here too though so it’s coming along. I don’t like to lose momentum on these things or it ends up taking forever to finish.

One of the books that I got (at Twist of Fate’s booth from a very ginormous and imminently-expectant Erynn!) is this one: 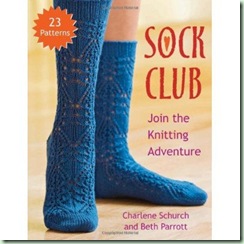 Sock Club: Join the Knitting Adventure by Charlene Schurch and Beth Parrott, published by Martingale. This book includes 23 handsome sock patterns gleaned from some of the sock clubs that have taken place over the last several years. Many of these subscription kits and knit-alongs were only available to members and this book now puts them out there for everyone. The designs are tasteful and very wearable with nothing too wild or excessively complicated – apart from the sexy Gothic Temptress knee-highs! Most are of the lace and/or cables variety with a couple of slip-stitch/mosaic stitch ones. Included in each pattern where possible are several size options and a chapter is given over to discussing ways of sizing socks up or down. There’s also a short section with (some illustrated) useful techniques such as the Twisted German Cast On and the Becker Toe (adapted from Judy Becker’s Magic Cast On). A chart of standard foot measurements and another of the standard yarn-weight system are also helpful. Otherwise this is not a beginner sock knitting book; some experience is assumed.

Yes, I know I mostly like to knit plain socks. However there are a number of patterns in this book that are very tempting! The cover ones for instance. Good thing I have lots of sock yarn.