Snow On The Tulips 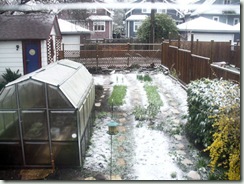 Yep, we had a skiff of snow his morning just to prove that winter has not done with us yet even though the blossoms are out and folks have been mowing lawns around here already. You can see my veggie garden with the two beds of winter rye in the middle that haven’t been turned. And the forsythia blossoms that didn’t get eaten off by the birds as a light salad before going for the seeds. In the middle there are my purple sprouting broccolis that we’ve already been eating. Luckily they are tough enough to withstand a pretty cold winter. A little chill won’t bother ’em. And my seedlings are safely in the basement under the lights. A bunch have come up already and are looking good! All green and growing like they should. It won’t be long before that bare garden will be lush again.

Back to the crochet project I started yesterday. I made a swatch with an ancient Shetland tweed yarn that I’d bought in a huge cone for weaving. It made me a bit sad to realise I’d purchased it from the late Russell Groff of Robin & Russ at some conference or other. Too long ago to remember details. It’s a lovely charcoal grey tweed described on the label as “Macbeth” in size R180T/2 (the Tex number, 180 g per km/2-fold, which translates, thanks to this handy converter) to 2,760 yards per pound. I like Tex sizes because they are absolute and can be calculated for any yarn. Anyhow, for knitters/crocheters this is somewhere around a fingering weight or a bit finer. It’s nasty, oily, dusty and harsh but blooms and softens considerably with washing and makes a rather nice light and drapey fabric. Here’s my swatch in the pattern stitch of one row sc/one row dc: I used a 3.5mm hook. The little stand-up swatch in front is the unwashed sample. It’s all curly and icky but the washed swatch is perfectly behaved. Now I’m swatching for edgings and post stitches because Of Course I can’t just make a plain sweater! Instead of the cute little row of eyelets that milobo used on hers, I’d like a little texture there instead.

I’ve become quite conversant with the Knitware Sweaters software since yesterday! I even broke down and purchased this one today (though I haven’t gotten my registration key yet). I figured that of the 3 programs, this was the one I’d find most useful and the only one that really needs the extras that you get by paying for it. I’m not a standard size. Go figure.

Anyhow, it turns out that even in the demo version, as well as printing you can save the schematics as bitmaps (which I converted into a smaller jpeg just because I can). For an example, here’s the back of my new soon-to-be-sweater: 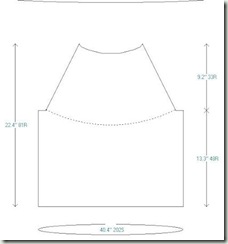 Pretty cool, huh? Stitches/rows and inches marked. No Adobe Illustrator involved! Of course this is a top-down circular yoke cardi so it really should be upside-down but who’s quibbling with the minor details. Plus the pattern is all written out and just needing a bit of tweaking to make it totally workable. Increases, dividing for fronts/back/sleeves, the works! I didn’t have to do hardly any math – not even in my swatch. Hurray! The program has a converter that all you do is measure your whole swatch, count the stitches and rows (even with a pattern stitch!), plug in the numbers and it converts them into the standard 4”x4” (or metric if you prefer). Those are the numbers that the program uses to generate your pattern for you. I’m happy. Now to actually use it and see how it fits, huh?