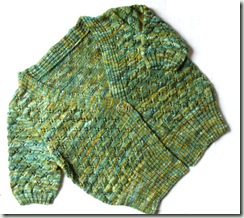 Yarn: Newton’s Yarn Country Happy Feet, purchased from their booth at ANWG ’09 in Spokane, 100% NZ merino superwash, 1800 ypp green multi. I used about 210g or 832 yds. Have more than half of the giant skein left! Notice how the colours changed and lightened above the armholes? Good thing I was working in the round so at least it’s more-or-less symmetrical.

Pattern: Began with Stardust by Turit Wilroy (from Knitty, Winter 2007). Made modifications. It wasn’t working out so frogged and began again with pattern generated by Knitware using Stardust’s general idea but including the mods that I liked originally thanks to nellum and her version. (That’s my garage door in her photo’s background!)

OK, now I’ve posted this and printed out all the notes and put them in my notebook. I can finally kiss this one goodbye! Except for wearing it, of course. In fact, I am wearing it right now. Love-love-love!

I’m feeling a need to cast-on something new…

It's beautiful! I'll look forward to seeing it in person soon. :-)