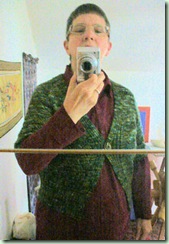 I finally have a new sweater! Yes, I know that’s a very crappy photo. The mirror is in sections (hence the line in the middle) and it was too dark so it’s very grainy after I lightened it up. What can I say? My in-house photographer wasn’t available! I’ll do a more complete FO Report later but for now I have to gloat some.

In total it took nearly a year, including the time it sat ignored and then got frogged to begin again. I’m very pleased with the fit this time. It really pays off to make a proper accurate gauge swatch and then work from there instead of trying to get the same gauge that the designer got. I so rarely use the same yarn and somehow I never get the right gauge in both stitch and row anyway. So for something that must fit properly, it’s much easier to start from scratch.

If I must start from scratch, I’m extremely happy with the pattern generated by the Knitware software. I did tweak it somewhat though but not in any fundamental way. In this case it wouldn’t allow me to lower the neckline below the armholes so I just began the same sequence of decreases 2 inches earlier. I used a ‘close fit’ which gives me 1” positive ease at the bust.  I also worked the body pieces after splitting at the armholes in a different order. They have you do the back first while holding the fronts on holders. I just worked the right front first while leaving the back and left front on the cable needle, then knit the back and then the left front so I didn’t have to use holders except for the right neckband while it waited for the left side to get done.

The shoulders fit perfectly. The sleeve caps were decreased more quickly at the top to shape them more rounded than the standard Knitware cap, which is squared off. Yes, I finally did them again on a single cable needle to get the decreases to come out the same on both sleeves! Worked great. Then I steamed the armholes and the sleeve caps gently with the iron to flatten everything out nicely. Much easier than trying to deal with the curly edges. It took me all yesterday morning to sew them in properly. I used the little hair clips to hold the sleeve in place: 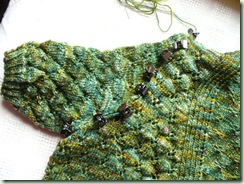 They worked perfectly! Much better than pins of any sort. Then I carefully stitched the seam from the front: (Remember to click on the photos to see it bigger.) I used a mattress stitch. If you need more info on how to do this there’s a great article in an old Knitty. Where it was more horizontal, I used a kind of grafting, but ignoring the bound-off stitches. The finished seams were very nice if I do say so myself: 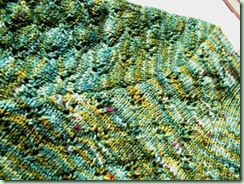 Then I decided to make myself a pin for the front: 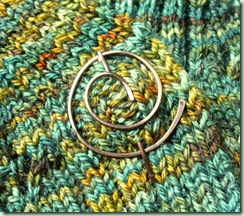 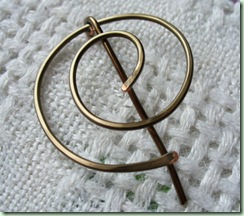 This is my spiral version of a penannular pin or brooch, also known as a “Celtic safety pin”. I used some dark bronze-coated copper wire (I think it’s 16-gauge, but I’m not sure) and hammered it on my steel bench block to flatten the ends after I shaped the spiral. (Nice to have all the right tools even if I don’t use them very often.) To give you an idea of the size the pin is about 1.5” long and it works really well to hold the fronts closed. If you look really carefully, you can actually see in the photo where it’s pinned into the sweater that there is a…gasp!…purl stitch where there should be a knit in the rib. I didn’t notice the error until it showed up in the centre of the spiral! Sigh. All my best efforts at perfection are undermined by my human hands. There’s a lesson there somewhere.

The pin is easy to attach. You push the pin part through the cloth and then twist the circle around so the open end slips under the pin. Lots of design possibilities occur to me for the upper part. (And check out some of the pieces by the fabulous Romi who does a much nicer job of the wirework than I do!) What I like best about this design is that the pin is attached to the brooch so it doesn’t get lost. BTW, ‘penannular’ means a not-quite-closed circle, which is the original shape used for centuries by the Celts.

Meanwhile, I’ve only got one active knitting project still left on the needles: 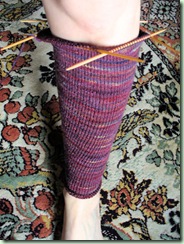 And I obviously haven’t gotten very far on those leggings yet either. However, it fits perfectly! Yay! My revised calculations are holding up so far. So what happened to the crocheted shawl I was working on way back last fall? ZZZZZZ…I’m not so happy with it so it’s been in time-out. The tension is very uneven due to my not having done much recent crochet when I began it and also not being familiar with the Solomon’s Knot stitch. I’m not sure I like the alpaca for it anyhow. Might just frog it (if I can – that alpaca is fuzzy!) and either start again with something else or consider another pattern. The other sleeping project is the afghan squares out of leftover sock yarn. It’s not portable and it takes too much decision-making to be a good project for the moment. That’s what I like about these things – they are very patient and will wait until I feel the love again. Or the hate. In either case, I’ll do something about them eventually.