Finally, I did something right and there are more Chinese woad plants showing up. This time I left off the clear plastic cover and: 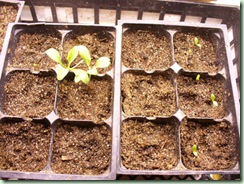 …if you look closely you can see about 6 new babies along with the older ones that now have their second leaves. That’s still not great germination since I planted about 15 seeds! But better than nuttin’. I don’t really need more than that. They are staying under the lights for awhile longer while they hopefully catch up some. I also have a half-dozen weld babies now too and that’s also plenty. They are tiny!

Now of course, because I was spending so much time on the front garden, the back garden needs major work. However it’s going to have to wait for the full job until after my spinning workshop next week. It’s still cool at night, though it promises to be quite warm and sunny for the next few days. I still haven’t quite gotten up the nerve to leave the tomatoes and peppers out in the greenhouse overnight yet. Nor have I planted the beans. (Maybe today?) The zukes and cukes are outgrowing their little pots though so today they’re going into the greenhouse to start hardening off. It’s mid-May already! Time to get a move on here!

Speaking of moving, I need to go sort wool! I finally got the last fleece for the spinning workshop (Anne Field from NZ! Yay!). It’s a lovely soft and clean Rideau-Arcott X Canadian Arcott from Jody McLean in Alberta. This one is the middle grade. I also have a last-year’s Merino X fleece (not sure of the farm, supplied by Lynne of Knitopia) for the fine grade and a Romney/Rambouillet X from Chris at Joybilee Farm for the coarse (though it’s almost too soft and fine for that designation). All crossbreeds you’ll note. Interesting. I do hope everyone is satisfied with the choices. I worked awfully hard to get them.

Speaking of spinning, I finished spinning half of the wool in colours that I picked out of my recent dye experiments (combinations of rhubarb, madder & blackberry). I’ve alternated short and long sections of 12 colours, then divided them in half so I could spin 2 similar bobbins and then ply them together. The total weight is about 150 g and I’m aiming for a sock-weight. Not to knit socks though. I’m planning a moebius scarf. More about the pattern later. First I have to finish the yarn.

Speaking of knitting, I had to frog a chunk of my Super-Secret Project because I dropped a stitch and carried on for another 3 freaking inches! Before I noticed and couldn’t pick up the stitch because there was no room. I’m nearly back to where I was several days ago. Sigh. My leggings are languishing while I finish this project. Oh well. Can’t really expect to wear them until late next fall anyhow. Lots of time. OK, it goes fast.

On top of sorting wool and planting beans, I need to go get my hair cut today. I hope I can get an appointment. I don’t have time to go other than sometime today. I hate it when my hair is longer than about an inch and a half!

I nearly forgot – thanks to all who wished me a Happy Blogiversary! I’m so glad you are enjoying my blathering, such as it is.