Whew! I’m back finally. It’s been a whole week. That was some ride!

I spent several days madly attempting to plant as many of my seedlings as possible into the garden. I knew I wasn’t going to have much time to fuss with them and really, it was time they were in the ground. They were getting pot-bound and leggy and generally suffering from being held a couple of weeks longer than they should have been. The weather was alternately sunny and cloudy so pretty much perfect transplanting weather. I have to say I still have a few things to go in. But I did my best.

Then there was the crow. I generally like crows but this one made me wish for a slingshot after it nonchalantly pulled out or chopped the tops off nearly a third of my marigold transplants and quite a number of the coreopsis, sunflowers and lobelia as well. This is not normal behaviour – at least not on this scale. But I think the crows have learned new tricks since the advent of the notorious chafer beetle infestation. They pull up the grass clumps that the beetle larvae have eaten the roots off to get at the yummy fat grubs underneath. So my theory is that this crow in particular thought there might be grubs under my plants, even though it isn’t grass and we don’t have chafers in our so-called lawn. I put netting and string and a number of unfamiliar items to hopefully foil the black beastie and I think it worked. I need to take that stuff off soon however because it’s an eyesore as well as bending the tops of the coreopsis rather alarmingly. We’ll see if he (or she) leaves things alone afterward. Crossed fingers.

Then Monday through yesterday was my spinning workshop with Anne Field from New Zealand. Anybody who has been interested in fibre stuff for any length of time has probably heard of Anne, who has 7 books to her name now (including a new one on divoré). Her interests are in spinning and weaving and she knits as well. Anne has taught many workshops in North America and I attended her collapse weave lecture a year ago in Spokane, WA, at the ANWG Conference. She’s teaching that subject in another workshop beginning tomorrow.

Nice to meet someone who has been spinning probably a decade longer than I have! Makes me not feel like such an old-timer. Heh. Here she is demonstrating spinning while standing so that we could see what she was doing. Don’t try this at home! 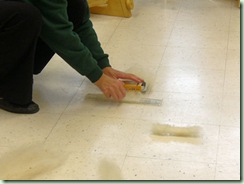 She made a number of them from one rolag. This was for woollen spinning. I also got to use my little 2-row mini-combs for the worsted spinning. Much nicer than flick-carding. Anne flicks differently than I do and just bounces the card on the fleece tips. Did I mention that we were mostly working with wool in the grease? Bleh. Not my favourite. She did suggest that we wash some of the bold fleece, it being from a young ram and rather whiffy. That was soooo much nicer to spin. I think her NZ fleeces must be much cleaner than our Canadian ones to enjoy spinning them in the grease. Even as little as a few weeks after shearing the process becomes not so nice as the grease and suint hardens. It was a fun exercise but I’m going to be washing everything from now on. Anne has not convinced me otherwise even if it is more work.

We were supplied with notes taken from Anne’s book Spinning Wool: Beyond the Basics, which is OOP because the publisher went out of business. A new and updated edition will be coming out in September or October with a new publisher, which is great since I don’t have this one. (I know. You are now clutching your heart in surprise, right?) It contains the complete information on Anne’s method of assessing a fleece and spinning it to a pre-determined size and twist count. According to what we did in class, it’s actually easier than it seems. Her approach is kind of the exact opposite to the one that the late Mabel Ross developed but they both end up in a very similar place nonetheless. 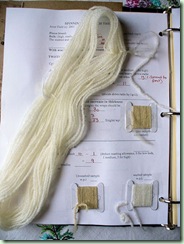 I had collected 3 different fleeces to share with the class. It wasn’t easy! This is my fine sample:  a Merino X from LeeAnn Read from northern Alberta, purchased through Lynne Anderson (Knitopia, White Rock, BC). I don’t know what the sheep is crossed with but it’s a lot easier to work with than purebred merino. The crimp and length is somewhat variable and it’s a large fleece. I gave them as much as I could stuff in the quart bag but I still have more than half of it left. You can see in our sample page that we took a wrapping of the singles, the plied yarn before washing and after washing. 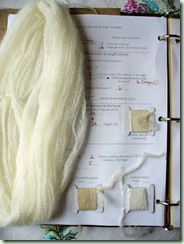 We actually began with the medium fleece: a Rideau Arcott X Canadian Arcott from Jody McLean of Little Smoky Natural Fibres, Valleyview, AB. I don’t think any of us had ever seen an Arcott fleece before and they are a truly Canadian breed so that was a fun lesson. It has quite a lot of sproing to it and is truly white when washed. This skein looks totally unlike anything that I usually spin so I was actually kind of shocked when I produced it! Very pretty and lightweight. Jody also supplied us with a sample of her Blue-faced Leicester X fleece as well. It was loverly stuff. Haven’t spun any up yet though. 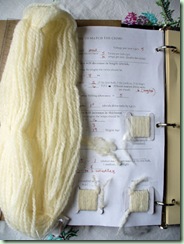 The bold (aka coarse) fleece was a Romney/Rambouillet X from Chris Dalziel of Joybilee Farm, near Greenwood, BC. (This is the same person whose daughter Sarah provided me with my original woad seeds.) The cross with the finer Rambouillet gives the Romney more crimp and nicer handle. However the class named it Stinky Boy due to the extra whiff of ram! One bag-full mysteriously appeared abandoned and nobody would own up to having “misplaced” it. I know I counted them all correctly to begin with! Luckily I’m not particularly bothered by the smell since I will be dealing with the leftovers and it washes out just fine.

The last day we spent creating worsted, semi-worsted, semi-woollen and woollen yarns. To make it easier to see the differences we used one fleece, the Arcott for all of them. My results were ummm…odd. I think I was getting tired by this point and was becoming sloppy. I’ll like do it over again at some point to see if I get the same results! Here they are anyhow: 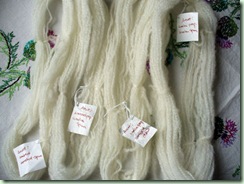 I’m loving that fleece. I still can’t really do the long-draw properly but used mostly what I call “point-of-contact” one-handed spinning which I learned while spinning cotton on a charkha. I need to practise better long-draw technique. Lots. I think it’s a serious shortcoming to not be able to do it better.

I’m not too happy about having greasy samples in my notes. You might not notice anything right away. However, in my experience, the grease darkens and hardens over time and spreads and soaks into the paper or card that it’s mounted on. Ick. It also attracts m*ths. (We don’t mention that word fully in case it manifests them.) I’d much rather that all samples were properly washed even if that means that some of the information they represent is not apparent. It’s in the notes though. How about a scan or a photo instead?

So all in all, it was a worthwhile experience and I really enjoyed myself. It was a friendly encouraging bunch of ladies, some of whom I hadn’t met before and others whom I’ve known for years. They were happy that they didn’t have to hunt down the fibres themselves and heaped a lot of praise and thanks on me for doing it for them. Made all my stress worthwhile! Whew.

Now I’m super tired and need to unwind, relax and process what I learned. That’s the trouble with workshops: you just get your mind blown. It can both energise and paralyse you at the same time. Takes a bit of time to think about it and maybe try out a few things to see if I retained it all. I also want to talk about Mary Frame’s lecture on Andean textiles that I attended but that’s for another time. Meanwhile I have to go return the Joy wheel that Anne used to Birkeland Bros who so kindly lent it to us for the workshop.

woowh. What a great class you were able to attend. I have been reading some of her work. Your work book looks amazing.