Finally actually finished something! Feels good and now I can allow myself to start something new. One can definitely have too many UFOs so I’m trying to keep it down to a better minimum. Can’t say I’ve totally succeeded judging by the heaps strewn around but I am trying. 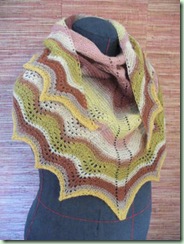 For: Me (Can one have too many shawls? I think not.)

Modifications: I did the garter section to 265 sts and then 17 repeats of Feather and Fan. Garter and lace sections are nearly equal in depth. Would have expanded the F&F again on the next repeat but not enough yarn to do so. Looks ok anyhow.

Comments: I spun this yarn for a different project but there’s nearly twice as much as I needed. Back to the spinning wheel! Meanwhile this looked like a great use for the first attempt’s yarn. It’s very attractive with stripes and multi-colours.

The finished shawl is about 22” to the point and 54” across the wingspan. Only had about 9 yards left after the bind-off! A tiny ball. I consider that as close as possible to completely using up the yarn. Blocked the curves into points because it was much faster to do with the blocking wires.

This is a dense, warm shawl rather than a lacy little number. Perhaps if I was to do it again, I would make the garter section smaller and the F&F section longer, just for visual balance.

Notice how well Debbie Double is modelling the shawl for me! I just knew she would become indispensible.

Now what to knit? I’ve been plugging away again on the woolly tights. Because I won’t need them until it gets cold enough again, they aren’t that compelling. But they’re the only current project on the needles so they win my attention. I hope to have enough discipline to make myself finish them before casting on for anything else for me. Other people’s projects are fair game though. Maybe some Granddaughter Socks since she’s grown so much lately she’s out of granny-knit socks? I have lots of sock yarn.

And then there’s sewing, which has definitely captured my attention recently - as I’m sure you’ve noticed. I got these patterns so far: 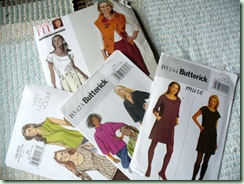 And there’s another shipment on the way. If you only looked at the envelopes you wouldn’t see the real possibilities. The vest by Sandra Betzina (Today’s Fit) looks a bit too dramatic but a version shown in Threads magazine’s Pattern Review section looks much better. It has the collar folded down and the shorts with released instead of pressed pleats. They look more like a skirt that way, though I don’t do non-elastic waistbands as a rule. In my defence, though I rejected it at first I kept going back to this pattern, both in the Vogue sewing magazine and online. I don’t think it was just the orange colour that attracted me! I would like to try one of Sandra’s patterns anyhow to see how they work out. Consider this a learning experience.

Similarly the coats in the centre look quite different in reality: wider and shorter than the sketches show. They are lined and would work well with heavier or stiffer fabrics. Maybe even a handwoven one. Hmmm… weaving… I think the view with 3/4 sleeves would be great over a turtleneck come fall.

The tops and the dress are for stretch knits, though the dress doesn’t need much stretch to fit properly. I can see it as a tunic with something funky in place of the button plackets on the collar. I know I have some aging cotton jersey in the stash so might try the sleeveless top with it. The crossover is one I can actually wear because it ends at the bust instead of lower down. Crossovers that end up further down fold and gape all wrong on me. Plus with a light-enough fabric it won’t add too much bulk where I really don’t want it.

Meanwhile however, these are on hold while I play tracing and re-drafting and fitting games with other patterns. I’m finished the fitting but holding on sewing the Celestina dress until I find the right fabric, but I think it will work now. Maybe. And I’ve been messing instead with BurdaStyle’s Liz blouse which with the high neck and cap sleeves is a good shape on me. The shoulder princess lines are easy to fit and also perfect to adapt to something like that Anthropologie top I mentioned awhile back. Fabric stash diving will soon ensue.

Yeah, I know. All pattern-making; no sewing. I’m learning a lot though: how to blend through several pattern sizes from bust to hip, how to pin-fit properly, how to use Debbie Double to help, and how to determine what actually looks ok on my body type. This is a big change for me. Usually I just wear something baggy and/or stretchy because I can’t buy anything that fits exactly the way I want: gently fitted to show some curves but skimming over the lumpy bits.

In my digging around, I also located a bunch of old UFO sewing projects and am currently evaluating whether they are salvageable or not. Some of them are so ancient, it’s hilarious! I think I need to get a grip on reality here. What will I actually finish and wear? What will be chopped up and reassembled? And what will hit the garbage? Stay tuned.