We finally had a taste of summer for the last couple of days. Or at least late spring since it isn’t really hot enough to be summer. It’s sunny though so I’m not about to argue! I like it somewhat cooler anyhow and this is what I consider just perfect at 16C with a breeze.

I decided yesterday afternoon that I should start washing up the leftover raw fleeces from the Anne Field spinning workshop. I had already done the little 100g sample bag of Bluefaced Leicester and it came out spectacularly white and silky. Can’t wait to spin it up! So I figured that Stinky Boy, the Romney X Rambouillet should be next because it was still smelling up my study right through a plastic bag and a cardboard box. It has a considerable amount of VM (spinner-talk for “vegetable matter”, aka grass, seeds, hay etc.) and rather dirty tips. I gave the better parts of this fleece to the class so I’m left with the not-so-great half. I filled up my washing machine partway with hot water and added a kettle of boiling water for good measure. My new bottle of Unicorn Power Scour got an excellent workout for the first wash and it worked well to loosen the yuck and freshen the smell. The second wash I used good old tried-and-true Orvus paste which doesn’t have much of a scent on its own but is great on wool. I use it to wash my handknit socks! Then I did 2 more plain rinses, adding more boiling water to the hot tap water because our hot water isn’t actually very hot. On purpose. Unfortunately as I tried to set it to spin the last rinse out, the washer’s control dial broke!

Now this is not a new washer. I can’t remember when we got it but it’s probably 20 if it’s a day. It’s a top-loader with a huge capacity and also works well to full woven, knitted and crocheted items. Of course I yelled for T-Man who is great at fixing things. If he can’t fix it right away at least he can figure out what’s wrong and hopefully find a replacement part. It turned out a plastic piece had snapped off when I smacked the dial too hard to shut it off. I guess I have to admit it was me and not Stinky Boy who broke it. Currently the control panel’s innards are sporting a huge wad of epoxy putty, a favourite repair product that resides alongside the WD40, duct tape, coat hangers and crazy glue. It needs to set for awhile so I’m off the hook for washing fleeces – or anything else for that matter, at least in the washing machine. I am happy the dryer still works though. Not that I need it to dry this fleece. I’m making good use of the sweater dryer here on the deck: 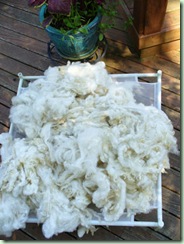 And after all that it’s still not all that clean. Pounds of fleece still to go too. Sigh. Hope the fix works!

Today bright and early I had to go see Dr. Serious Dermatologist. As I’ve whined about before, I would have made an appointment if I hadn’t already had one because things look pretty bad. (Please avert your eyes if you’re squeamish): 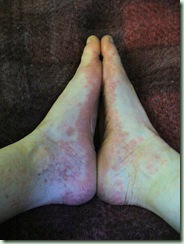 And that’s an improvement over 2 weeks ago too. He thought I might have had a viral infection that triggered the worsening of my psoriasis but I’ve been feeling fine and healthy. It might have been some stress while T-Man was away that week. Who knows? Anyway, now I have to use this lovely stuff every night: 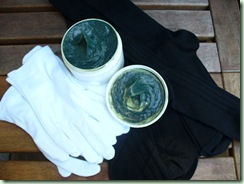 Crude tar. Smells even worse than the lighter, more refined tar I’ve been using and is even more staining. Hence the gloves and socks to wear over top. I cut the fingers down on the gloves: 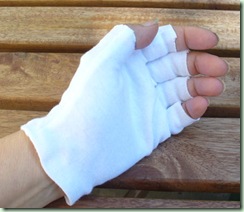 Just to mitigate some of the digital claustrophobia. Do you know how weird it feels to sleep with gloves on? Now that the weather is warming up it’s going to be “interesting” wearing so much extra stuff to bed. Hot, yes! Sexy, not so much.

To distract myself from feeling depressed, I went out and weeded the garden for a couple of hours. Then I got these in the mail: 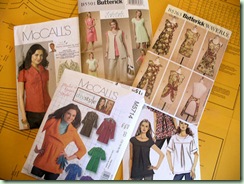 More patterns to play with. Including a couple of tops, a jacket/coat, aprons and a set that has a top/dress, pants and vest. Yes, I have lots to go on with now. Though if I see another sale on Vogue patterns, I might be tempted to go nuts with Marcy Tilton’s pants patterns. They are cute and different. Though I really need to make a basic well-fitting pants pattern for myself and add all the details later.

Gotta go toast the feet and legs while there’s still some sun to toast in. It’s clouding over again. Dr. Serious-D made me promise to toast as often as I can (without burning of course) though he calls it “sunlight therapy”.

Hi... if you want to give your 'T' man a real treat, buy him Gorilla glue and duct tape... hubby says the very best duct tape he has ever used..Sheila