No, I did not fall off the edge of the earth! I’m still here plugging away and trying to regain my equilibrium after the disappointments and frustrations of last week. I’m sure you didn’t want to hear me bitch and complain. I didn’t want to hear me either! Suffice it to say that there have been some improvements and some…not so much. Moving on. I’ve got lots to tell so this is going to be a looooong post.

It has been stinking hot here – though not quite as bad as last summer. Sleeping has been difficult, at least until the house cools down in the middle of the night. I cannot sleep properly without covers up to my chin! (Why is that?) Today is cloudy and cooler and a lot more comfortable. Up to now I’ve been spending an inordinate amount of time watering everything in sight and it seems a lovely reprieve to slow down. We are eating beans, cucumbers, tomatoes and even a pepper or two from the garden now along with the summer squashes, salad greens and kale. I have new baby green things planted that will hopefully produce before the fall cold slows them down. If we’re lucky the first frost won’t be until late October. Though Luck doesn’t seem to be my friend these days so I won’t keep my hopes up. Whatever!

T-Man has been continuing to ride his electric-assist bike every day. And he’s lost some weight with all the exercise too. He is very pleased with the fact that he can get as much assist - or not - as he likes. If he’s feeling particularly energetic he can even apply resist which is great for going down hills and charges the battery at the same time. I’ll be interested to see what happens when the weather changes. He’s been talking about getting some nylon rain pants to go with his jacket. A positive sign.

Even though things are improving somewhat I’m still wearing gloves nearly every single moment: alternating between cotton, disposable nitrile, gardening and heavy-weight nitrile. My hands are still too sensitive (thanks to the corticosteroids) and my fingers are still peeling (thanks to the Soriatane, which I’m thankfully no longer taking). I am really truly missing my knitting! So instead I’ve been dyeing which I must do with gloves on anyway.

I’ve been using Procion MX dyes which are for cellulose fibres like cotton, linen, rayon, tencel, bamboo, etc. and work in warm water. No need for a heat source or heat-proof dyepots. I’m quite familiar with these having learned how to use them in Applied Design class way back in high school in the 1960’s. (Yes, young-uns, that was the stereotypical “hippy tie-dye” days! Don’t laugh.) First, just to whet my appetite (wet my dye-petite?), I dyed my stained white cotton gloves: 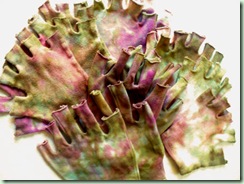 I call it “Damselfly’s Camouflage”! At least they aren’t dirty white with added tar stains anymore: seven pairs, one for each day of the week. Although recently I’ve only been wearing the two pairs with longer fingers and washing them by hand to wear them again. Even if I finally heal enough not to need gloves in the daytime, I’ll still need them at night. It keeps me from rubbing my face with tarred hands! Ick.

The adventurous part of trying to dye the gloves was that even though they were fresh out of the laundry, they still had lots of residual grease and oil embedded in them. Some of the dye (I used turquoise, purple, and scarlet/orange) had a hard time taking and there was quite an oil slick on the surface of the liquid. So after that first attempt (too pink! blech.) I simmered them in a dyepot with Synthrapol, rinsed and tried again with my favourite moss green (a proprietary mixed dye from Maiwa). This time I nuked the dish to make sure the dye had set. There was still some oil slick but it worked much better. At least now they don’t show the tar stains or the dirt and T no longer calls me Minnie Mouse. (Hi, Mickey!)

Flush with that success I decided that it was time to tackle the vintage cotton sheets that I’ve been promising to make into a rag quilt. I collected these from close family members who have since passed away: my adopted mom and T’s auntie. (They weren’t dead at the time! Just going into care homes.) The sheets are all lovely pure cotton, unlike the cotton/poly sheets that are so common now, and all different sizes from crib to double. (Though why auntie -who was unable to have children - had two crib-sized sheets in her stash, I’ll never know!) I tore them into quarters to make the pieces easier to handle - except for the crib sheets which I plan to use as tablecloths if I don’t need them for the quilt. There were 22 pieces in total, which to simplify dye measurements I considered approximately a yard each. Probably lots more fabric than I actually need for the quilt. Awwww…

This was a big project, so I got out my trusty copy of Ann Johnston’s Color By Accident to remind me of the amounts of dye and assists and the recipe for her ‘parfait’ dyeing technique. I definitely wanted accidental colours! But to keep them somewhat coordinated I only used 4 dyes: gold yellow, scarlet, emerald and black. The first two are pure colours and the latter two are proprietary mixes, all from Maiwa. I also got out the soda ash which is the ‘fixer’ for Procion dyes and for once I actually used urea which I usually skip, though at a lower rate than recommended in the book.

Parfait Dyeing
(based on Johnston but with modifications by me)

Prepare the cloth. If not PFD (prepared for dyeing) it needs to be scoured in hot water and detergent. Mine of course was already washed many times, plus once more when I brought it home. The recipe works best with 1 yd. (1 metre) pieces, so tear to size.

Wet the cloth. I used the washing machine filled to “low” with warm water and just threw everything in to soak until I needed it. I kept the crib sheets separate to dye at the end to use up any leftover dye stock.

Mix up the urea water. I used hot-ish water and added 4 tbsp (60 ml) urea to the 5 cups total (about 1.25 litres) that I needed. Use more urea (2-4 tbsp per cup) if you have difficulty getting the dye powders to dissolve in solution.

Hunt down every ice-cream bucket (or similar size) that you can find. I used 6 buckets (including one larger one) and a buffet warming tray. Really you only need one for every 3 pieces of fabric to be dyed.

Mix a dye colour. I used disposable plastic cups that hold approx 1 c. with a little room left over to stir. In the cup I added about 4 or 5 tbsp (60-70 ml) of dye stock, mixing colours as I liked, and then topped it up with plain warm water to about 1 c (250 ml). You can use more or less dye stock depending on how dark or light you want your colours but always top up with warm water to make one cup. Make a new cup of diluted dye stock in this way for every layer of cloth, deciding which colour you want next. They will effect the each other to varying degrees depending on which order you layer them. (More on that later.)

Layer one. Squeeze out a piece of fabric and arrange in a scrunched-up layer in the bottom of a bucket. Add a cup of plain warm water. Press and squish to get out the air bubbles. Pour over your first dye colour. Press and squish some more. More movement means more homogenous results. I prefer not to play with it too much. Pour one cup of soda ash solution over and press and mix some more to make sure it penetrates throughout.

Layer two. After 5-10 min. squeeze out and arrange a second piece of fabric over the first one. Pour another colour cup of dye over and mix a little. Pour another cup of soda ash solution over and lift and press a little to distribute. This colour will effect the bottom layer quite a bit and the bottom layer’s colour will transfer some to layer two.

Layer three. After another 5-10 minutes, repeat the instructions as for layer two. This colour will effect the bottom and the second layer and the second layer’s colour will effect the top one. You can turn the top layer over (which I forgot to do) after a few more minutes and press it more to get more of the other colours onto it. It won’t be as multi-toned as the other layers and the bottom one will have the most.

Leave alone for the dye to set at least one hour. I left the buckets outdoors on the deck overnight.

Rinse in cool to warm water. You don’t want to use hot water at this first stage or you will lose some of the dye. I rinsed each piece a bit in the sink and then threw it into the washing machine (filled with warm water and a couple of tsp of Synthrapol) with the others. Then I ran it all through a wash cycle.

Wash again in very hot water. I ran it all through another wash cycle with straight hot water and more Synthrapol. This can be repeated one more time if the rinse water isn’t coming out clear. Once all the unfixed dye is out, the dyed cloth will never run again and can be laundered normally.

Dry. I just threw the whole bunch into the dryer and they came out like this: 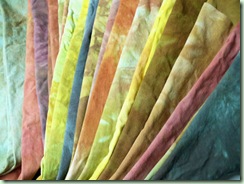 You should see each one individually in real life. I’m really pleased! Now I just need to iron them all and I’ll be ready to cut out my quilt squares. (Not that I can use scissors or even a rotary cutter at the moment. Boo-hoo.) I also have a couple of flannelette sheets to sandwich in between for extra warmth. I’ll leave them white because only a little will show at the rag edges and it will give a nice contrast to the colours. If you haven’t seen rag quilts, here’s one tutorial and there are lots more. Easy-peasy.

Those are beautiful, Louisa! :-)

Thanks for the compliments, you guys! Monica, do you mean dyeing for sale? Because I've actually been dyeing stuff since about 1968! Rarely for sale though I've had a few commissions in the past. I have no desire to sell anything. That takes all the fun out of it for me! Besides there are gazillions of talented indie dyers out there already. I concede the field to those with the business acumen as well as the talent.