Man! Yesterday had to rate as one of the worst days ever. It was so bad that I’m truly glad it’s now today instead. Just so it’s not still yesterday. Horrible.

Oh, you’re curious, huh? What’s got ol’ damselfly’s tail in a knot? Well, appointments with Dr. Serious Dermatologist are uncomfortable at the best of times. But this time I was running late, scooting along on my bicycle and…caught my skirt between the back brake and the tire rim. Took me several minutes to get free and tore a hole in my skirt. Finally got to the dr’s office and his receptionist was away. No, he doesn’t have a sub. He just carries on by himself. So it was “slam-bam-thank-you-ma’am”: stop this, restart that, do the other, here’s your prescriptions, call if there’s a problem, ‘bye. Any questions from me were given short shrift. Why does he insist I only have palmo-plantar (hands and feet) psoriasis when obviously it’s covering about 2/3 of my body? And it doesn’t resemble anything I can find in my research. He actually said, “Everyone’s psoriasis is different.” Ohhh-kayyyy. Is he covering up that he doesn’t really know what’s going on?

So then I had to go to one particular pharmacy to get a refill on the black tar since they’re the only ones in town who can make it for me. It took much too long so I had to leave for my next appointment at the skin care centre. I would have to go back later for the prescription. The skin care centre was interesting. Everyone was friendly. But…I was examined by a young dermatologist and he called in a resident and they debated and questioned and checked and double-checked and…said that I should not get light therapy right now. My condition was too sensitive. It would be too painful. They questioned the treatment ordered by Dr Serious and really scratched their heads over me. They finally weren’t even sure whether or not I really had psoriasis! The first doc said he would talk to Dr Serious and then I have to find out if any treatment should change. But of course nobody could get through yesterday if the lovely Erika was away sick leaving nobody to answer the phone. I still haven’t called. I’m too upset still.

Then I went back to get my tar at the first pharmacy plus I had two more prescriptions to fill at my usual pharmacy. Of course they couldn’t fill them right away because they always have to order the stuff in so I still have to go get them later on today. The only good thing was that by then I was starving so I bought myself a yummy Beard Papa chocolate éclair and a cup of jasmine tea. Unfortunately that didn’t really help me feel any better about the day’s frustrations and disappointments. And that’s not all. There’s more!

So I rode my bike home all tired and dejected and was right at the corner where my house is when I miscalculated the turn at the curb and missed the ramp up. Thankfully I was nearly stopped by then but my bike fell over with me not able to get my foot down in time so I fell under it. I couldn’t lift the bike off myself because that darned precious battery is so heavy so I had to crawl out from under it. I scratched up both myself and poor Rideau (the bike) but luckily not too badly. Much of my skin is rather fragile these days, as you might imagine. Now I had a torn skirt and a road rash behind my knee to go with it. At least I was only a few feet from home. And I’m not leaving again until I absolutely have to. No, it was not a very good day at all.

So far today is better. The sun is out and it’s not too hot. Let’s talk about something else, shall we? Because the lack of it was driving me nuts, I did a teensy bit of knitting on Sunday and a bit more on Tuesday. I used the Aurelia superwash wool that I had spun up for Andrea: 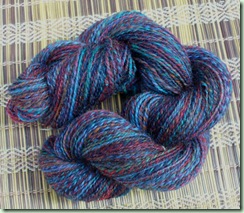 I decided that I needed to knit something that didn’t have a specific yardage necessary since I only have this single 50g ball to work with. So I started with 3 stitches and am knitting mindless garter stitch, increasing 1 stitch with a yarnover one stitch inside each edge on each row. So far it looks like this: 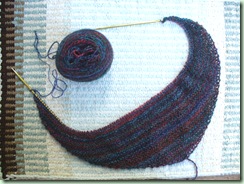 It’s a little scarflet and is coming out kind of a boomerang shape which I like a lot. I’ll just carry on until I nearly run out of yarn and then bind off. If I want to, I can always knit or crochet an edging on later with another yarn. Should be superwash too though, shouldn’t it? Maybe add some beads? Right now though I’m not knitting any more until my fingers are healed some, hopefully now that I’m not taking that nasty med anymore that caused them to peel so badly. I already had to cut longer fingers on a new pair of gloves because they weren’t protected enough with the short old ones. Just the tips of my fingers stick out from these and I can’t tension my yarn properly. Sigh. But at least my hands are more comfortable.

Now I’m going to go put on my gardening gloves and play in the dirt.

That DOES sound like a perfectly awful day. May tomorrow be very wonderful to balance things out.

So sorry everything was out of wack for you yesterday. Things will get better :) your knitting looks great.. love the colours in the yarn, and the shape of the new shawl.

So frustrating for you!

Your yarn & burgeoning project are lovely though. Oh, and I've sort of borrowed your kerchief idea and added some bits to start one of my own in some handspun. You're so inspiring!