At least that’s what I call it! My Spectrum Group met on Thursday to play with a new dye technique that one of our members recently learned. You start with balls of yarn, as many as you need for your project. In this case I used 50g balls of sock yarn: 2 white Phildar Preface and 2 medium gray DGB Confetti for two different dye sequences which will become 2 pairs of socks.

There was some debate about the balls. I left them in the commercially-wound state that they came in, just removing the ball bands. Some tried balls (or cakes) wound on a ball winder. One fine silk cake had a cardboard tube in the centre that kind of mushed up (technical term!) while the dyeing went on but it helped to keep the yarn from getting impossibly tangled. And some tried old-fashioned hand-wound balls, which in my opinion worked best of all. I’ll explain why in a bit.

After putting down plastic on Jo Anne’s deck under the awning, we each took a 4-litre (gallon) ice-cream bucket or something similar and filled with a couple of inches of hot tap water. It was supposed to be enough to cover the balls but I discovered that less worked better. Strong dye stocks using acid dyes (1 tsp to 350 ml hot water) and acetic acid (1/2 tsp 56% or 1/8 c vinegar) were already mixed in containers. We added a tablespoon or two to the bucket and then plopped in the balls.

Now came the tedious part:  you had to take the ends of the two balls together, squeegee them off between your gloved fingers and drop them, each into its own small container. Pull, squeegee, drop. Pull, squeegee, drop. Over and over until you thought that you had enough of that colour. Then add another couple of tbsp of the next colour and repeat the pull/squeegee/drop thing until you got sick of that one. Continue adding colours and unwinding the ball until you run out of yarn, hopefully more or less at the same time with each ball. This is what my second batch that I finished at home looked like near the end: 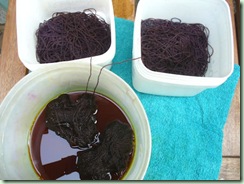 It doesn’t look terribly exciting, huh? That’s the gray yarn though and it’s hard to see the variegations when it’s wet. How about this? 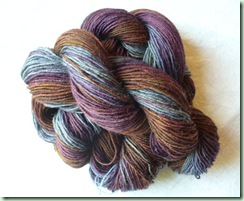 Better? Turns out the effect improves vastly when it’s dry! But you can’t really tell while you’re in the middle of doing it. T. D. Us. When you’ve finally gotten the two yarns all dropped into their containers, then you have to carefully bag them up either in cling wrap or Ziplocs (partially unzipped to let the steam out) and steam for 20 minutes or microwave for several short bursts with a rest between each to set the dye. After the yarn cools it can be wound on a niddy-noddy (a PVC one or an old one that doesn’t mind the wet), then rinsed and allowed to dry. The first sequence that I did on white yarn looked like this when I was half-finished the winding: 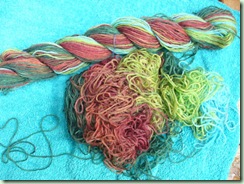 That spaghetti actually wound up pretty easily as long as I didn’t mess with it too much. The old towel is to absorb the drips. And here’s the final dried yarn: 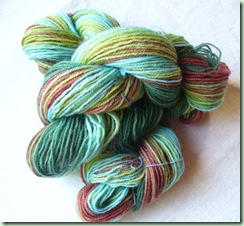 To see the way the colours actually segue here’s the yarns stretched out: 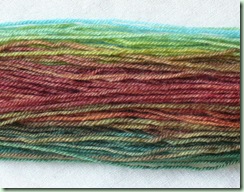 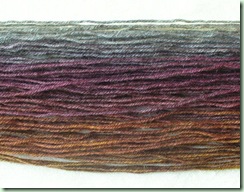 Now when I knit socks from the first yarn they will segue (yup, that word again!) from the turquoise at the cuffs to the green at the toes and no repeats in the sequence. And similarly with the second yarn from the blue-gray through to the brown.

OK, what would I do differently next time? The commercially-wound balls are looser especially in the centre and that gave the dye a greater chance of penetrating to the centre sooner than I wished. It meant that the later colours were more influenced by the colours that came before them and that it was harder to shift them as they got darker from the layers of dye. That’s why the first colours are lightest, both because they were in the dye for a short time and because they only had one colour applied. So tightly hand-wound balls are better. A tighter ball doesn’t let the colour penetrate so easily so you can have quite different colours from one end to the other, ones that aren’t nearly so “layered” and mixed. Theoretically you could even go back to the first colour again or repeat the sequence more than once if you were careful not to add too much dye each time. Though of course hand-winding the balls adds another step to an already extremely slow process.

Speaking of slow, if I had moved more slowly at the beginning and given the dye more time to set in the yarn, I would have had a deeper starting colour. Also, I added the next colour too soon before I had wound off very much yarn. Since it’s such a glacial process it felt like a much longer portion of the balls than it was! In other words, be patient. Be very patient.

Altogether, it took between one and two hours to wind off the whole 210 yards in each ball! Each and every yard has to go through your fingers and sometimes it’s difficult to separate them into their individual containers smoothly. And yes, they need to be separated or you’ll have a mess when you try to wind them up into a skein later. Plus you have to stop and add more dye every so often which also takes time to do. Did I say: T. D. Us? And it would be worse the more balls you were trying to deal with at once. Note this is not a potential production process! (Unless you could find a way to mechanize it somehow?) For me, it’s strictly for the unusual results only.

Admittedly, slow as it might be this is a reasonably functional way, besides spinning the yarn from scratch, to get the colours to shift over the whole length of the ball of yarn. And to do it to more than one ball at the same time if you want. Pretty slick really. However the proof of whether it’s actually worth all the effort will be in the finished socks. When I’m able to knit socks again.

This is gorgeous, Louisa! I'd say it was worth the effort. :-)