Dust Off The Elliptical Trainer

I have a feeling we’re both going to need to schedule time on it soon. What with all the holiday baking: 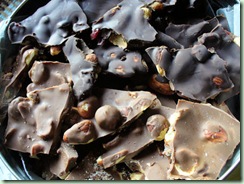 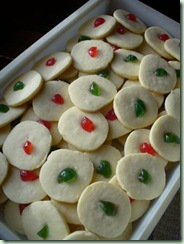 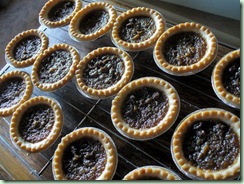 That’s two tins of chocolate, a double batch of shortbread and 4 dozen butter tarts with raisins. Oh my! Hopefully the Thundering Hordes we’re expecting on Saturday will help us eat most of it. We are just going to have to ration ourselves lest we develop tummies that jiggle like a bowlful of jelly. Oh wait – they already do that. OK, jiggle even worse than usual. Do a couple of shortbread cookies and a butter tart count as lunch?

Now we’re on the home stretch. We have to pick up our fresh free-range turkey today and bake the ham tomorrow. (No time or oven space for it on Saturday so we’ll just have it cold.) There will be some last-minute toilet scrubbing and vacuuming going on. Luckily the house will be so full and the lights so dim that hopefully nobody will notice my “pet” cupboard spiders, Queenie and Teeny. Moving right along…

I’m nearly to the heel flaps on the current pair of knee socks. They are going quickly even though I had to frog back to fix the messed-up gusset decreases. I only have one project on the needles at the moment and I’m trying desperately to resist the urge to cast on something else. Especially after I found a whole cone (800g) of worsted weight yarn in a tweedy fawn colour in the stash. No idea where I got it but I know I didn’t buy it retail. I’ve been gifted boxes of vintage yarn in the past so maybe that’s where it came from. Anyway it looks awful on the cone but washes up to a nice fluffy state. However it totally needs to be overdyed into a more interesting shade. There’s definitely enough for a whole sweater on the cone.

There’s also the lovely nearly-black Corriedale fleece that is crying out to be a sweater for T-Man. It was supposed to be for the Anne Field spinning workshop last spring but turned out not to be suitable. The crimp was too similar to another fleece and the dark colour made it harder to see what we were doing with counting twists and such. Mine! I paid the big bucks for it so now I get to make something that fully justifies its qualities. It’s all washed and ready to start picking and carding.

So right now I feel like I’m in some kind of crafty suspended-animation waiting until the Holidays are over to start new projects or even to finish old ones. I haven’t even looked at my quilt project except to move it so that I have half of my work table available for when I was gift wrapping. I also have fabric and patterns all ready to start upgrading my wardrobe but no space to work on them yet. Maybe that’s why the socks are going so fast? Nothing else is competing – except cleaning and baking, that is. Two more sleeps and then we can move on. Whew!