On The Fourth Day of Christmas

My True Love went back to work. And then the rain finally stopped and the sun came out! Timing sucks sometimes, huh?

Yes, I survived – thrived even – during the Crazy Christmas Onslaught at Damselfly’s Pond. Twenty-five guests. It was totally fun! Too much food, a modicum of drink, and a whole lot of hugging and kissing and baby-snuggling. Perfect. No I didn’t take any pictures. Sorry, my hands were full of turkey or baby. No I didn’t get them mixed up! The turkey was a lot bigger so it was easy to distinguish. Heh. I also seem to recall a mountain of mashed potatoes somewhere in there too. We have leftovers enough to last us the week. Good thing I love turkey. And ham. And pickles! Sometimes all together. Yum.

Then in between the rain and wind we managed to get out for a couple of nice long walks. The house is back in order now too - except for needing another good vacuuming. The lights stay up at least until Twelfth Night. I like to keep them as long as possible in the dark of winter. This is in direct contrast to those who put up their lights and decorations before the Halloween pumpkins have cooled and then take them down the second Boxing Day is over. I tend the other way – late to get them up and later still to take them down. We have one more family function – New Year’s Day at T’s brother’s. They volunteered even though they’ve already hosted Thanksgiving this year. Their house is even smaller than ours and somehow it all seems to work out! Hey, I’m already getting into my new Word for the Year: Acceptance, aren’t I?

Now we’re back to your regularly scheduled program. In the next couple of months I plan to get lots of crafting done – quick before I have to start planting seeds again. Plus we need some major mucking out of the corners around here. January 1st is the 32 anniversary of the day we moved into this house. Surprising how much accumulates when you don’t change abodes every few years, isn’t it? 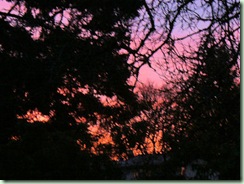 To keep this post from being completely boring, here’s a somewhat out-of-focus sunrise. I have always had a thing for tree branches against a colourful sky!