Yes, I know I’m always creating something but right now I feel like I’m on fire with ideas. Maybe it’s spring fever or something? Really I have no idea why the Urge To Make seems to be even worse than usual. The only drawback is that everything goes….so…..slow…..ly…

Because all my creations take so long to accomplish and I can only work on a couple of them at a time at most, I feel like my ideas are piling up in my head. Hope it doesn’t explode from the pressure! My biggest fear is the usual one – many will disappear in a puff of smoke before they become realised. Oh well. It’s not like I get extra points for number of items made or anything. I am my own taskmistress.

Meanwhile I’m procrastinating on the planting and gardening. The weather is warming up a little but it’s been very wet. Hard to dig in the garden when it’s a quagmire of mud even if it stops raining temporarily. It needs about 3 days of sunshine to dry enough to be workable and of course we don’t get more than a day here and there at most. I have 3 flats of plants in the green house but I suspect a lot of them have been holding too long and will need replanting. Sigh. So much for getting to it early. Today or tomorrow at the latest I will finally get my flowers, tomatoes and whatever else into flats under the lights. I’ve been putting it off for weeks. That may not be a bad thing as it turns out anyway. I think we’re in for a cold wet spring like last year.

Of course I shouldn’t complain. Compared to other places with too much snow, flooding, earthquakes, tsunamis, meltdowns in nuclear power plants etc. we’re doing really well! Even some predicted typhoon-level winds along with accompanying power outages managed to pretty much miss us. Am I asking for trouble now by just mentioning our relative good fortune? Probably. Sadly my heart goes out to those so much less fortunate. It’s been a pretty tough time all around the world this last while, hasn’t it?

So what have I been up to? A couple of things. Really. On Saturday I went with Milady Daughter to Voyageur Soap & Candle for some supplies to make more of the Oat-Infused Hemp Cream we both like plus some lip balm which I’ve never tried before. I had a problem with the last batch of cream going a little rancid due to some rather elderly oils. They only have a one or two-year lifespan so it pays to buy small quantities and use them up quickly. They’re too expensive to waste! I’ve also decided to keep the supplies in the cold room under the front stairs to hopefully help them last longer. It’s the coolest place in the house and in winter it’s as cold as a refrigerator in there. I got some black cherry flavouring and some organic sweet orange essence oil to make yummy lip balm tastes. The recipe called for peppermint but I don’t like that because it burns on my lips. And we got tiny jars to put the lip balm in. We could have gotten the tubes but they’re hard to fill for us amateurs. Maybe another time. Now to play mad scientist with the potions.

Then we went back to MD’s house where we had left baby Rosebud in the care of her daddy and grampa. I brought my serger over so we could take the feet off Rosebud’s sleepers. She can’t use the feet with her boots-and-bar. It was an easy task to chop off the feet as close to the seams as possible but it was much (much!) harder to use the machine’s cover stitch to finish the raw edges afterward. Threads kept breaking and the presser foot got caught up in the snaps and I just couldn’t stitch straight. I might have done better with my old sewing machine and a twin needle. We laboured through about half a dozen or so sleeper sets. The end product looked like it had been stitched by a drunken sailor in a howling gale but at least she has some clothes to wear to bed now. Hopefully they won’t disintegrate in the first laundering. Baby clothes get washed an awful lot.

Then yesterday I got obsessed with fitting what should have been a simple pattern: 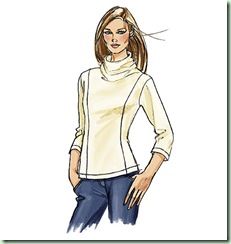 Vogue 8323 View B, top with shoulder-princess-seams, a cowl neck and 3/4 sleeves for stretch knit fabrics. I have a soft waffle-knit cotton in a gorgeous deep purpley-brown colour (love-love-love that colour!) to sew it in. But it took me the whole stinkin’ day to get something that I can only hope will fit me! If it does, then I’ll have a good shapely t-shirt pattern to use for many more garments. Cross my fingers – though that kind of makes it hard to sew. I’m going to cut it out this afternoon and sew the main seams together before trying it on. I will definitely not serge the seams until I know it will fit me the way I want it to!

I don’t remember having nearly this much trouble in the past. I nearly had to redraft the entire thing! I used Debbie Double to pin-fit the Frankensteined pattern tissue on and then put it on myself to double-check. I think it fits Debbie better! LOL!! I had to get T-Man to hold the back in place on me and he didn’t like my squiggling around to see what was happening when it started to tear the tissue. I ended up retracing the whole thing again on new tissue. The pattern just skims the body now but I’m not sure if it should actually fit a little tighter than that. Pattern tissue is a lot different from stretchy fabric but you can’t have negative ease and still pin-fit a tissue. Guess it’s easier to take in than let out anyhow. We shall see how it goes. I’m hoping this will be a wearable muslin. The fabric was cheap but I love it so much. I so don’t want to make a “wadder” out of it.

Darn. I feel like the whole day is whizzing by too fast. Must be Daylight Savings Time. Why don’t they stick with one or the other? I really hate the adjustment periods when we switch. Now it’s totally dark again when I wake up in the morning. It was just starting to feel like it was actually daytime instead of the middle of the night when I get up. Guess I shouldn’t complain. Pretty soon it will be light when I go to sleep!

I'm so jealous that you have a Voyageur Soap & Candle there. The nearest one to me used to be Kamloops, but they closed. Creams, lotions and balms are SO much fun to make. I have tons of great recipes.

I agree with you about the time change thing. It is enough to make me nostalgic for the years I lived in Saskatchewan, where they don't mess around with time changes.

Well, Ev, Voyageur is still about an hour away in Langley though that's a lot closer than it is to you! They do mail order of course if you don't mind paying postage. I'm going to check with the originator of my cream recipe if she'll allow me to post it.

Heather, it's not so much that I mind Daylight Savings, I just hate switching back and forth. Pick one and stick to it, I say!