I’m kind of tired today so I thought I would take a day off. I know – you’re asking how a person who Has No Real Job can take a day off, aren’t you? For me it’s a mindset. Instead of doing all the really energetic things like vacuuming (my most not-fave job for some reason), laundry, digging a garden bed, or walking many kilometres, I’m knitting a little, reading a little, typing a little. Whatever I feel like doing that involves staying seated. Of course stuff like the dishes still need to get done anyhow. Like death and taxes, dirty dishes are always lurking about. Especially after the grandbeasties have been here.

We, BTW, had a lovely time last evening even though neither they nor their grandpa were feeling very well. T-Man even went to see the doc only to be told that he has the “100-day flu” and not to worry. It will go away by itself. Even his plugged ears will unplug eventually. Poor baby. He’s getting an unsolicited taste of what it’s like for me without my hearing aids in. Super-Princess is also currently sniffly and her poor face is all broken out with eczema from wiping her sore nose. And Stargazer was feeling under the weather as well and running a temperature. Lovely bunch huh? Now that I’m finally all better I’ve been trying hard to avoid catching this stuff all over again! Bleh. We played with a new Play-Doh game, had supper and then watched “How To Tame Your Dragon” until their parents got back. They had been watching the hockey game in Rogers Arena with a gazillion other fans. (No, T and I are not sports fans. Still sad the Canucks lost that game. But not the series. Everyone lives in hope.)

It’s cloudy and cooler today and it’s windy too. I’m trying to decide if I should make the effort to go out and carry on with cleaning up the bed where the summer squash need to go. Or if I should instead dig out some fleece to put in the madder pot. Or if I should continue working on the RoseBunting that I haven’t touched in days. Hence this post’s title. I can’t decide and the day is getting away.

I got this far with the Watermelon Eyelet Cardi for Rosebud however: 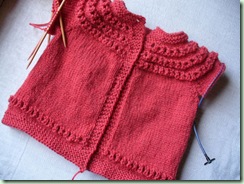 Cuteness! So my littlest grandbeastie is spoiled by her granny, ya think? And here’s the now-dry suri alpaca yarn after it’s makeover in madder: 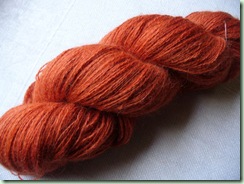 You can see that it’s somewhat more orange than the Zephyr silk/wool skein on the right here: 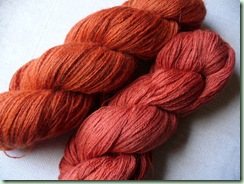 But it’s at least as dark in value. Even though the alpaca was in the exhaust bath, it was in it for several days longer than the Zephyr. Interesting. It also feels somewhat softer and cleaner than it did when I first got it. Did so many processes (washing, mordanting, rinsing, dyeing in woad leaves, more rinsing, overdyeing in madder, even more rinsing) actually improve this yarn? At least it doesn’t felt very easily. It was from an unknown supplier and bought at an ANWG conference a number of years ago. Bad Damselfly forgot to take notes. <smacks forehead>

Speaking of Zephyr yarn, my next project is going to be the Rock Island shawl by Jared Flood (Ravelry link, Brooklyn Tweed link) in this: 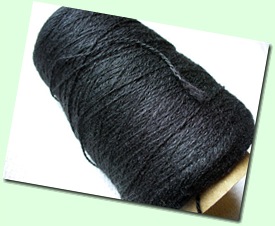 Yes, that is indeed a full cone of BLACK silk and wool. I desperately want a black shawl and this gorgeous lace pattern was calling to me with its siren-like song until I broke down and bought it! I figure if I knit it during the brightest and lightest time of year (over the summer solstice), it won’t make me go blind. But it will likely be a challenge. A couple of other knitters have used Zephyr for this pattern but none of them seems to have finished theirs yet. I wanted to see what it blocks out like in this yarn. Guess I’ll find out eventually, huh?

In other news, I got a copy of Vogue Knitting’s Early Fall 2011 issue. Do check out the results of the Magical Mohair challenge! The photo styling is a hilarious combo of forest fairy meets retro-hippy. But I am totally smitten with the First Runner-Up’s two-piece dye-painted effort. Big congrats to Lynette Meek from Nanaimo, BC. (Nearly local!) They even included the dye-painting instructions though I’m not sure how understandable they would be for the absolute newbie. Must be a first for VK though. The other two pieces shown are lovely but Lynette’s is glorious! Must be the dye colours.

that shawl is beautiful... but black.. do ya have light coloured needles..that might help... you are brave than moi... have a great day