It sure was warm the last couple of days! Could that mean that it’s actually June and not November? I’m not sure I totally believe it yet. It certainly was cool and wet last Thursday when 2 members of my Spectrum Study Group came over and we played with madder: 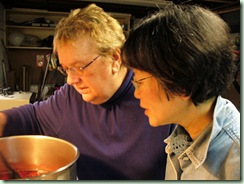 That’s Sandra (left) and Masami checking out the dye pot. We dyed over a kilo of yarn, including some for other members who were off to the ANWG conference in Salem, OR. Here’s some of the results: 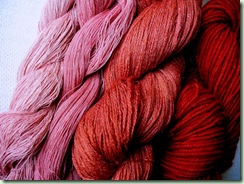 The rayon weaving yarn skeins on the left are actually slightly more orange in real life – at least on my screen. It doesn’t take the dye very deeply but that’s ok with me. The centre large skein is Zephyr wool/silk while the darkest wool skein on the right is Masami’s. This was already dyed a clear yellow in osage orange awhile back and she decided to overdye in the madder exhaust (second use) bath. It came out very deep even in the already-well-used dyebath. Deeper than my wool/silk from the first bath. Always curious to me how this works.

Afterwards, there was still a lot of colour in the pot so I quickly mordanted and threw in my new white silk french-cut undies: 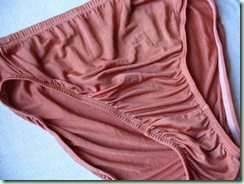 The colour reminds me of my favourite Utah arches, doesn’t it? Notice the thread didn’t take any dye because it’s polyester. (You didn’t expect the manufacturers to use silk thread, did you? Or even cotton or nylon.) I also added a large skein of suri alpaca that had already been dyed blah beige in woad leaves. I left it in for several days and even managed to accidentally heat it higher than recommended for madder because I turned it on medium heat and forgot about it for about 4 hours! It’s a nice orange-red now and gorgeous in comparison to what it looked like before. Currently the skein is drying on my deck railing or I’d show you. There’s still plenty of colour in this pot so I plan to shove some wool fleece in it to hopefully soak up some more. But first I have to wash the fleece. Maybe tomorrow. The pot is patient.

On Friday I finally finished my Abotanicity Tunic. Yay! I haven’t properly written it up yet but here’s a preview of it blocking on the deck: 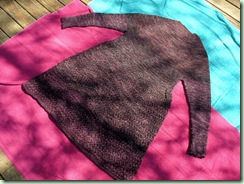 I had to fudge the sleeve cuffs because even though I counted and counted and couldn’t find a mistake… the decreases on the second sleeve ended about 2” earlier than the first one. Nobody will notice but me. They look just fine. This tunic is nearly more like a dress. Superwash sock yarn always seems to stretch and the lacy skirt hangs only a few inches above my knee. If I was to do it again (which I’m not!) the only things I would change would be the neck front which comes up a little high on me and the underarms which come a little low with resulting bunching of extra fabric. Neither is a real problem and otherwise it’s perfect and I love it! Good thing after all the knitting it took, huh? Unfortunately as I predicted it’s now too warm to wear it – likely until next fall. Sigh. Maybe I’ll take it with me on the Fambly Campout in a couple of weeks. Guaranteed to still be cold enough in the evenings in the mountains.

On Saturday we went cycling to the Seawall and around Science World, along the north False Creek waterfront and on to English Bay and Stanley Park. We made it as far as Second Beach and had fish and chips at the concession. It was only so-so flavour-wise and it took ages to get them after ordering. I think they had to catch the fish first? 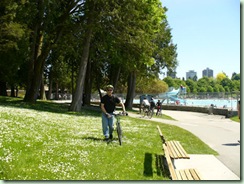 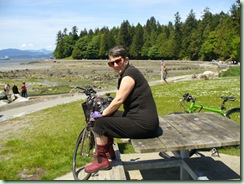 Helmet-head and all. I was hot enough to wish I’d brought my bathing suit and towel for the rather inviting but unheated pool: 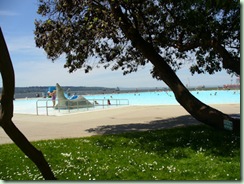 Instead we rode homeward in the ever-increasing traffic, over the Burrard Bridge in the special bike lane (nice!), up the steep hill (electric assist, I love you!), a stop at the magazine shop and finally home for a beer and a rest on the deck. Whew! I was quite stiff in a few places after this first time on a bike since last October! Apart from the excess of “creative” driving we saw happening around us, it was fun. And yes, I was actually drinking a beer when I got home. It was made at the U-Brew and bottled by T-Man and his brother. I’m finally (finally!) developing a taste for lager and besides our new batch of pear cider isn’t ready yet.

I earned another beer yesterday after 5 hours in the garden. That’s about 2 hours more than my usual limit. I did a lot more weeding out front and now we just need to do some pruning. T finally finished making a box for the butternut squashes in the spot where he removed a laurel earlier. He used wood from our old fence – totally recycled materials. (The louvered fence there on the west side of our yard was built by our neighbour and his dad. We just paid for part of the materials.) I’m hoping the squashes grow well there in their compost and mushroom manure: 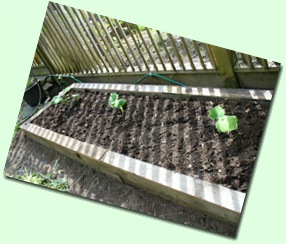 I reeked of “eau d’poisson mort” after schlepping fish fertiliser around until I wore out. Speaking of the garden, I need to get back out there this morning and transplant my cucumbers and weed the summer squash bed so I can transplant them too. The Big Grandbeasties are coming over later this afternoon so their parents can go downtown to watch the hockey game being broadcast on the big screens in the streets with about 20,000 of their closest friends. Personally, I’d rather play with little kids. But that’s just me.

The colours are beautiful and so many variations. Love the tunic too. Game 3 playing in the background. Thanks for the info on the paintbrush varieties. I saw a very white one once last year but didn't take a photo.

Thanks for the kind comments, hon'! And finding out about the sulphur paintbrush for you is just a symptom of my insatiable curiosity. I remember them from camping trips to the Interior.