Why am I happy that it’s raining after all the complaining that I’ve done over the last few months about the same thing? Because I would have to water my garden if it didn’t get some today. And it’s also a good excuse not to have to work out there again today. I need a break. It’s been fun and productive, but the inside of the house is suffering from neglect. The dust buffaloes are starting to herd the humans around. Not good. However, before I go round them up I have a few things to show off. (Avoiding the vacuuming is one of my finer talents!)

On Friday, Milady Daughter and I took Rosebud to her appointment at Children’s Hospital. They were quite pleased with her foot’s progress and graduated her to running shoes for a few short periods every day. So she was fitted for a pair of cute little pink runners and also went up a boot size for her boots and bar system. Next appointment isn’t for another 3 months so there was a distinct possibility that she would have grown out of her boots before then. Rosebud was very good and very patient even though we had to wait around for a very long time for our turn with the specialists. Although she did manage to spit up all over me after I fed her a bottle. I’m blessed. I know.

Of course we got a chance to try some other things on too: 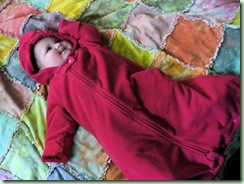 The Rosebunting fits – but it’s none too large! Her boots are only about 4” from the bottom. It will definitely serve it’s purpose though to keep her warm on our upcoming camping trip. BTW, that’s much closer to the real colour of the fabric than the last photos. She’s being amused there by her grandpa. The tongue is out so you know she’s happy!

Then there’s this Finished Object: 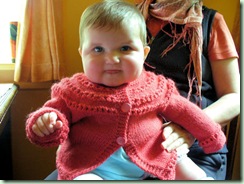 For: Rosebud (such chubby cheeks!)

Comments: After several attempts with a different yarn (sock yarn, 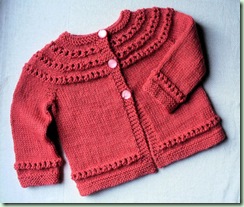 too thin) I used this DK weight and the smaller pattern size but larger needles. The pattern started out well but became a little vague toward the end. I made the body about 10.5” long (from neck) before working the bottom row of eyelets. I changed to smaller needles before working the garter stitch hems and cuffs. I also only had 4 vintage buttons in the stash instead of 5 so made 3 buttonholes because that looked better.

This cardi is somewhat similar to the two that I made for Rosebud’s cousin Super-Princess though they are from different designers. Obviously I like the eyelet design! I was hoping that this would be somewhat larger on the little beastie but she’s a big girl! The sleeves are still a little long though so maybe there’s some wear left in the sweater for next fall.

What else? Oh yeah. Yesterday I rinsed out the Merino-X wool fleece that had been marinating in the remains of the madder pot since last Thursday: 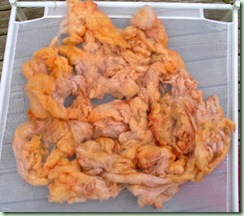 Not sure how accurate that colour is for you. It was still wet when I took the picture. It dried to an orange-sherbet colour with a more yellow-orange on the outside of the clump and a pinker shade in the centre. It teases up easier than it looks though there are some nepps and second cuts. I began with 250g and lost about 30% of the weight in the scouring process. I may lose a little more in the teasing and picking. Next I plan to run it through the fur drum on my Pat Green Deb’s Deluxe carder before spinning it up probably as a lace or fingering weight. I have no idea what it will become yet! We’ll find out eventually.

So I assumed that the madder was finally spent and dumped the remains in the compost box. It dyed quite a lot of fibre in total though I’m not sure whether I like the much more finely powdered root. Some of it escaped the bag and the nylon stocking that it was contained in the dyepot. A lot of it washed out in the rinsing but the remains are shedding out on me as I tease the wool. Larger pieces are much easier to remove. When I use my home-grown madder there is no way I can grind it really fine anyhow. More like chunks.

In knitting news, I was unfortunately correct about the difficulty of fixing a mistake in the Black Rock Shawl’s edging! I accidentally dropped a stitch while tinking back to fix something that wasn’t right and ended up throwing the whole thing down in disgust. Which is where it stayed until this morning when I took it upstairs to the magnifier light and continued tinking carefully back until I could see that everything was back where it should be. Only two little rows but I’m reminded not to take this pattern for granted again and To Be More Mindful! 16 out of 71 repeats completed. A long way to go.

In sewing news, I need to start another sewing project now that the Rosebunting is done. The hard part is settling on which one – there’s so many that I want to make! FYI, the Leko website still has their 168-100-82-106 size (equivalent to Burda size 44) women’s patterns available to download free. They state a limited time but so far it still works. Of course I took advantage and grabbed a few more! I can’t help myself. Some of the designs are quite attractive and more varied than BurdaStyle magazine. I also made myself a catalogue of sorts (even though they have a complete one available) by pasting the pictures of the ones I have into a Word document along with the pattern numbers. Then I put the printed pages in the same binder with my scanned copies of the BurdaStyle magazines line drawings. Then there’s my Big Four collection too. See what I mean? Too many choices; so little sewing time.

Best get a move on. The day is moving on faster than I am and I have a lot of things I want to accomplish yet. Laundry, vacuuming, dishes…bleh. At least I don’t have to water the garden. I’m sure I’ll have plenty more opportunities to do so in the next few months however.