I’m dithering today. It’s really noisy outside because they’re finally paving the street that they chewed up while replacing the water mains. I was going to go get my hair cut and run some errands but it’s raining so I decided to wait until tomorrow when it’s supposed to be much nicer. Meanwhile I should be doing the laundry and the vacuuming. Instead you get the next instalment of the GGG 2011. Bet you thought I’d never get around to it, huh? Oh ye of little faith(ful).

Day 14 – If you remember back to the last GGG post, we were still in Yellowstone and camping at Madison Junction while exploring the Old Faithful area. The next day we went back south again to catch up on things that we missed. First we visited the Fountain Paint Pot area: 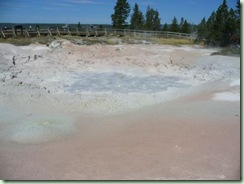 It’s huge but not nearly as exciting when you can’t sense the heat, the smell of sulphur and the “blub-blub-blub” of the boiling mud. The colours were really subtle and pretty. These dead trees have “bobby socks”: 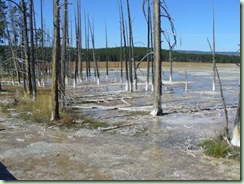 The minerals have slowly seeped up into the trunks and caused them to remain standing when they would otherwise have fallen and decayed. There were lots of other features in this area to see too, which we did and then we headed to the Midway Geyser Basin for more.

You couldn’t really see the biggest geyser here, Excelsior, due to the huge amounts of steam in the early morning air. It apparently was a regular geyser in the late 1800’s but broke itself and didn’t erupt again until 100 years later in 1985. It blew up rather spectacularly for a couple of days and hasn’t gone again since. Who knows when it will erupt again? BTW Excelsior eats hats. At least according to the number of them that we saw lurking in the bottom of the pool between the steam clouds. Fascinating.

The prettiest thermal feature here (among many) is Grand Prismatic Spring, in gorgeous green and turquoise surrounded by its huge bacterial mats. It’s the largest spring of all at 200 feet across: 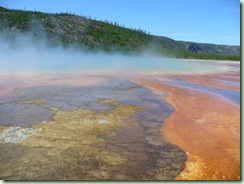 You can’t get a photo of the whole thing, even if the steam would blow off for awhile. Unless you can fly above it!

After Midway we stopped at Biscuit Basin which includes this pretty and very deep pool: 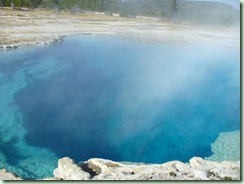 It’s called Sapphire for obvious reasons. Then we went back to Old Faithful and saw a few more things that we’d missed the day before. This one is Anemone Geyser, which has 2 vents: 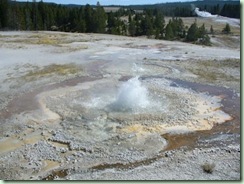 It’s just a little guy…er, geyser, but it erupts every 7-10 minutes and is quite entertaining to watch. First it’s just a hole which slowly fills up with water, then starts to bubble, eventually spouting about 8 feet in the air awhile, then subsiding and finally disappearing with a sucking sound. The other vent alternates with bubbling up but it never gets very high. Fun!

Another good one was Sawmill Geyser: 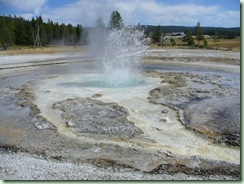 This one pumps up to about 50 feet and swirls around with a grinding sound. It’s usually erupting about 30% of the time so it’s easy to catch. One that we didn’t catch for the second try was Daisy. Elusive wench. We were too late again. After watching Old Faithful erupt yet again, we headed back to camp for a another night at Madison tired but exhilarated.

Day15 - Of course we weren’t getting out of Yellowstone without a whole lot more hot stuff! We had missed the Black Sands Basin the day before (parking lot was full – of bison!) so we thought we’d finish up the area before we headed further south to Grand Teton, which was only short drive away. Somewhere along the way we stopped to watch this grand moose: 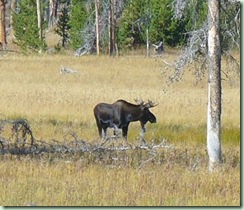 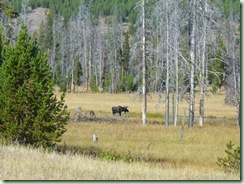 Moose scare me more than bears do! We continued east over Craig Pass and crossing the Great Divide several times to West Thumb, a funny name for a section of the huge Yellowstone Lake. 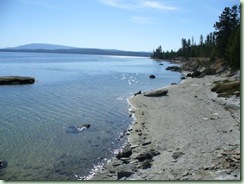 Apparently this bit is a later addition to this gigantic volcanic caldera. We never even saw the main part of the lake at all! And yes, there were more hot springs and geysers here too. The most interesting were several geysers in the lake itself: 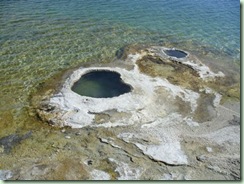 This one’s called Lakeshore and apparently sinter cones don’t usually form underwater. One of these cones called Fishing Cone, was once used as a fishing spot where one could catch a fish and then cook it in the boiling water right there! Unfortunately this trick is no longer allowed. Darn.

After West Thumb we finally turned south toward Grand Teton National Park. We got a campsite at Coulter Bay on Jackson Lake. It was quite empty being nearly the last day they were open this season. Pretty lake: 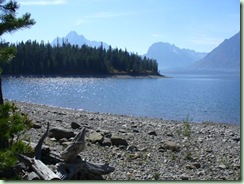 This is only a wee corner of it, an isthmus that connects that near-island to the mainland. I managed to collect some nice glacier-smoothed rocks here for my pattern weights collection. However we were a little disappointed with Grand Teton for some reason. The mountains were rather decorative. I’m sure their name (which loosely translates as “big titties” believe it or not!) was coined by some love-starved French trappers. Cracks me up. (Apparently I’m still 12.) But we found that the supposed trails were bad or non-existent, even to get from the campground to the lake. And they wanted a ridiculous $3.75 for a shower in separate tacky “Does” and “Bucks” rooms in the laundromat. Ugh. We stayed dirty. We did manage to successfully shop for souvenir t-shirts for the grandbeasties in the gift shop though. And then we left early the next morning.

Here is where I’m going to leave the tale for now. That was only two more days and it took quite awhile to tell it! I’m starting to forget what we did and in what order now so I’d better finish up before the whole trip becomes just a distant memory. And a bunch of pretty pictures.

In craft news, I’ve been spending inordinate amounts of time making patterns for the next couple of sewing projects. I now have what I think is a satisfactory basic dartless bodice pattern that I can use for a number of garment shapes. At least I can use the armholes and shoulder lines and check the body widths to make sure there’s enough room without having to redraft everything every time. Franken-patterns here I come! Next I need to add darts for a more fitted bodice. And make a basic skirt pattern. And scariest of all, a basic pants pattern. I have a satisfactory one for stretch pants but not for wovens.

I’ve also been knitting a little on my Oatmeal Jacket and a lot more on the Dark o’the Moon Gloves. These are knit using the Knotty Gloves, a free pattern by Julia Mueller. I’ve gone down to my usual 2mm needles though for small enough gloves for my tiny little hands. I’ve gotten this far: 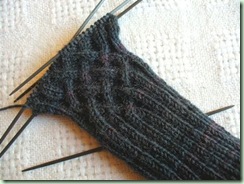 And the other one is nearly that long too. I’m quite liking the pattern so far. Nice long cuffs. Yay.