I’m going to try to finish this up today. Quick before I forget where I’ve been and what I’ve done! I have lots of great photos and memories but putting them in the right order and getting the details right takes some research.

Where did we leave off? Oh yeah, Grand Teton.

Day 16 – We left Coulter Bay and travelled south to the cute little touristy town of Jackson, Wyoming, where they have huge decorative arches made out of…elk antlers. Everywhere. It’s kind of cool in an icky sort of way. I’d personally rather see the antlers on the elk! Here we turned west and were finally on the homeward run.

Right out of Jackson we groaned up the very steep Teton Pass and into Idaho and over another pass then down onto the prairie. We drove and drove past sage brush and farmland and finally reached volcanic land again. This time instead of a caldera we were on a huge multi-level lava flow called picturesquely Craters of the Moon. The campground was located in the midst of huge black cinder rocks: 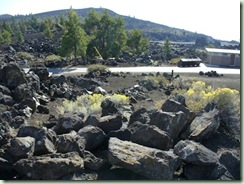 Very different from anything we’d ever camped in before! They had a really interesting visitors’ centre and we learned about the successive volcanic lava events that created this huge area. We also learned the difference between pa-hoe-hoe and a’a lava. Bet you thought it was all the same, huh?

Day 17 – It was really quite hot here so we geared up accordingly for our day driving around the loop road and walking the trails to check out the volcanic features: sunscreen, hats, water and heavy boots. Cinder is sharp!

First we hiked up a cinder cone: 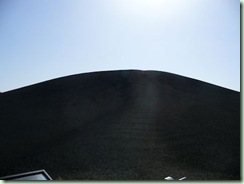 See the trail? It’s there. It’s also higher than it looks: 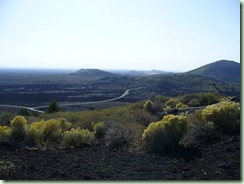 A view from up top. We checked out some smaller spatter cones: 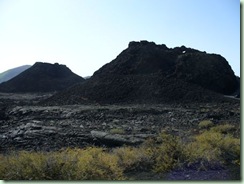 You could climb up and peek inside these two. There were black paved trails everywhere: 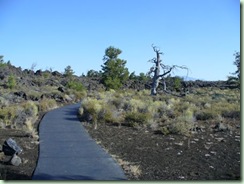 …because they definitely want to discourage you from trying to walk on the lava rocks: 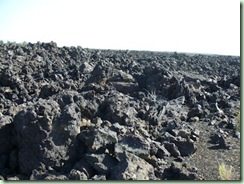 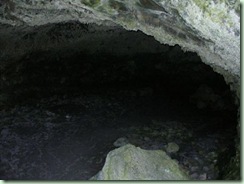 We peeked into a couple of these. There are some that you can explore but you need a permit and we didn’t have one. Also I hate caves. Except tame ones and these aren’t. This goes in for many yards and is bigger than it looks. Wish you could feel the cold air emanating from it!

This day was also T-Man’s birthday but since we were in the middle of nowhere our celebration was somewhat subdued. He didn’t really mind of course. We’re almost always away on vacation on September 25 so he’s used to not getting cake and presents. I was knitting diligently on his sweater though which apparently was satisfactory.

Day 18 – Another travel day. We were heading home so we weren’t planning more than one night anywhere from here on. We crossed the rest of Idaho and then into Oregon to a place we’ve stayed before, Farewell Bend: 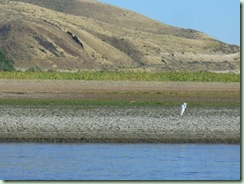 That’s Idaho over there on the other side of the Snake River and an egret with his neck tucked down standing on the gravel bar. Is he in Idaho or Oregon, Pacific or Mountain Daylight Time? Does he care?

Day 19 – A long travel day where we took some scenic smaller highways through the middle part of Oregon where we’d never been before. This narrow canyon goes through the badlands and the John Day Fossil Beds. We didn’t have time to check that out though. 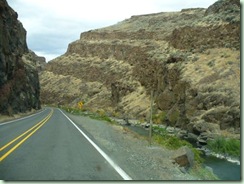 After getting a little lost in the town of Madras, Oregon, we finally wended our weary way to Cove Palisades State Park. In the middle of the prairie farmland the Deschutes River dug an impressive canyon: 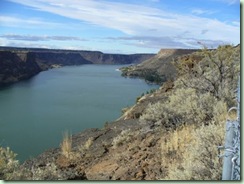 It’s a really busy place in summer but here at the end of September it was winding down so we could only stay at the upper campground, not down by the water. Our elevation made for a pretty impressive sunset view though: 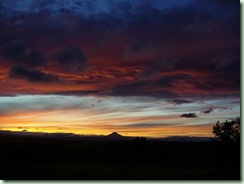 Yes, that’s a volcano in the middle there, Mount Jefferson, one of the line of volcanoes down the West Coast. We saw quite a number of them this trip including Three Sisters, Mt. Hood, Mt. St. Helens, Mt. Rainier and of course the closest one to home, Mt. Baker. We passed very close to Mt. Hood.

Day 20 – This was shopping day in Portland which I already blogged about here. But before that we spent a little while checking out the rest of Cove Palisades. After packing up we drove down, down to the river and along the narrow edge and across a little bridge to the other side where we found these neat petroglyphs: 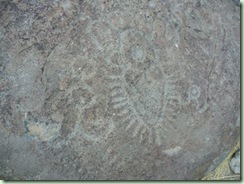 Apparently they had moved the rock from its original spot when the river was dammed and flooded the area. There were some tempting trails and another campground (closed) but we needed to get moving. So we drove back across the bridge and up, up to the level land and navigated our way back through the confusing side roads to Madras. From there we headed north and neatly bypassed Mt. Hood and into Portland from the southeast.

After hitting the fabric store and the book store we crossed over the Columbia River into Washington and found a campsite in the damp woods at Seaquest State Park, on the road into Mt. St. Helens. We’ve been there a number of times before so we just rested after our long day.

Day 21 – Now back in very familiar territory we zipped up the I-5 freeway to Olympia and made a slight detour left towards Shelton and T-Man’s shopping stop at Frantz Glass. From there we continued up the west side of the Hood Canal to Port Townsend.

Unfortunately this year we were too early for the fun Kinetic Race parade. But we managed to score a campsite in Fort Worden which was a definite coup because it’s incredibly popular. We played hide-and-seek in the fort’s concrete bunkers and checked out the vintage lighthouse: 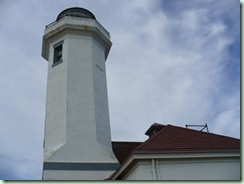 We also spent half an hour watching river otters, a mom and her youngster, playing: 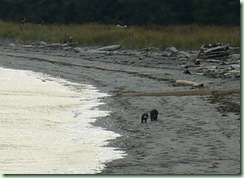 Impossible to get a better shot of them because we didn’t want to get too close.

Day 22 – We couldn’t get another night at Ft. Worden so we drove down into the old downtown area of Port Townsend to check out the shops and then caught the ferry over to Whidbey Island. There were lots of campsites available at Fort Ebey.

After a walk along the cliff and down to the beach, where I picked up a load of Whidbey’s nice smooth rocks, we staggered back along the road with bulging pockets. We stopped to watch the local parasailing guys practice their liftoffs and landings: 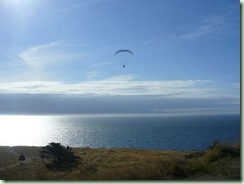 This grassy promontory is a popular spot for that activity for some reason. There wasn’t quite enough wind though so there were some pretty spectacular fails. Crazy people.

We followed our usual custom of having a celebratory glass of wine in the late sunshine on the bench on the cliff above the water. Another couple were doing the same thing a short way down and a fellow walking the trail asked whether someone was serving! It was funny but maybe you had to be there…

Day 23 – Last day. It’s only about 3 hours home from Whidbey so we had plenty of time. It was a fairly painless 15 minutes or so at the Peace Arch border crossing. Home again, home again, jiggety-jig.