Finally! Here we are again with the next instalment. Where did we leave off?

Day 12 – This was another moving day in Yellowstone. We woke up to freezing temperatures in Norris campground and shivered our way through getting dressed, breakfast and packing up. By then it was warming up considerably and we were starting to remove clothing layers. T-Man used the public phone to make a reservation at Madison campground so we didn’t have to rush to get there.

It’s only a little more than 13 miles from Norris to Madison but there are several stops of interest on the way. We joked that Yellowstone is a place of hot and cold running waters everywhere. On the maps in the book that I got at Norris (Yellowstone Treasures by Janet Chapple – invaluable) the hot stuff is printed in red and the cold ones in blue. Sometimes the hot and cold are running into each other: 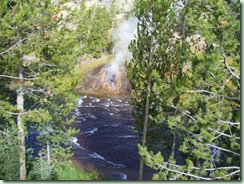 That’s one of the Chocolate Pots on the Gibbon River. It does look for all the world like a giant bubbling chocolate fountain due to the iron content that stains everything dark rust. The river appears deep indigo blue over the rust-stained rocks on the bottom.

A little further down the road is the Artist’s Paintpots. A trail leads to a loop that takes you around and up to a viewpoint where you can see the delicate colours: 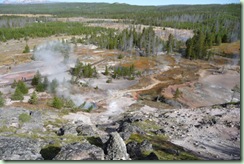 Each pool is different: pink, orange, green, blue. We spent ages watching a huge mud pot blub like a lava lamp. We also watched a small pool that went from calm to little bubbles to a roiling boil and back to calm  – all within the space of a few minutes - then repeat. Fascinating.

For the cold selection, we enjoyed the stop at Gibbon Falls: 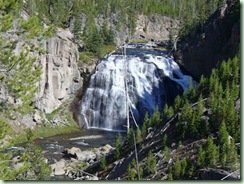 Not as spectacular as Yellowstone Falls but very pretty in the morning sunshine. We also checked out Beryl Spring before getting set up in the campground at Madison Junction. Even with our reservation they tried to give us a very unsuitable campsite where we hung out in the road and had no space to put up the awning. So T had to go back and get it switched to something better. They seem to save any good campsites for the “big busses” which I think is a little unfair. We all pay the same amount.

We relaxed a bit for the rest of the day, apart from a stroll along the rivers. Here the Gibbon River meets the Firehole River and becomes the Madison. Remember the Madison from earlier where we camped at the spot where it plus the Jefferson and the Gallatin rivers become the Missouri? Here is much earlier along in the sequence: 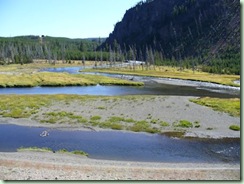 The rivers are very good fishing apparently, judging by the number of fly fisherman about. We saw quite a few good-sized trout swim away from us as we walked along the bank. Supposedly it’s due to the high calcium carbonate thanks to the geothermals. We even found a lovely warm spot at the edge of the river where several ladies were sitting and dipping their toes. Probably waiting for their fishermen.

Day 13 – This was the big geyser day. After securing our campsite for another night we drove south the 17 miles to Old Faithful. Of course there were lots of other things to see on the way! First we took the one-way loop road past National Park Mountain through the narrow canyon to Firehole Falls. Next we checked out the Lower Geyser Basin where we stopped at the Fountain Paint Pot loop walk. Clepsydra Geyser was doing her thing: 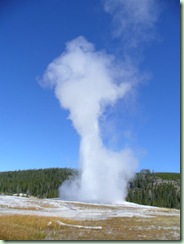 Apparently she rarely stops but pauses when Fountain Geyser nearby is active. There’s water spraying about 20 or 30 feet high there. Not as huge as these things go but pretty spectacular anyway. There were many other pools and geysers too including the paint pot, bubbling mud tinted with iron oxides.

We skipped some of the stops, saving them for later, and headed to Old Faithful Village. There are several lodges and shops there including the spectacular Old Faithful Inn built of lodgepole pine, stone and wrought iron in 1903-4. It’s a National Historic Landmark for good reason! Unfortunately I couldn’t get a really good photo of it, inside or out. I just stood in the lobby with my mouth hanging open looking up!

There’s also a brand new visitors centre too with educational displays and listings of the times when the few predicable geysers in the Lower Geyser Basin are due to go off. The question everybody asks “When is Old Faithful going to go” has the joking answer “About 15 minutes after the benches are crowded”. Really it’s more like an hour to an hour and a half apart. We managed to catch it several times over two days: 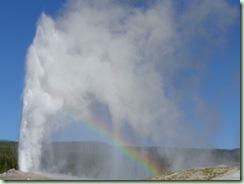 See the rainbow caught in it? So lovely. However, if that’s all you see at Old Faithful you’re missing a ton of good stuff! The boardwalk trails criss-cross to the best sights. The bison were enjoying the green space between the geothermals: 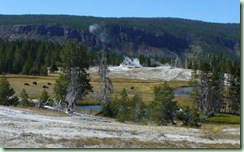 That’s Castle Geyser in the background. It’s so very old that it has built itself quite a cone of geyserite. Unfortunately we didn’t see it erupt. However we did see Grand Geyser: 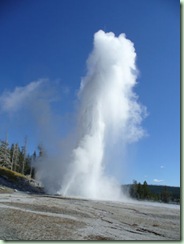 Which was quite spectacular – even more so than Old Faithful. We lucked out on the timing for this one since it only goes 7 to 10 hours apart and got the bonus of 3 for the price of one. You can just see Vent Geyser in front there and in between is the bubbling Turban Geyser. The neat thing about Grand is that it has huge bursts that rumble and roar. You think it’s done and it starts again spraying 200 feet in the air! It can do this up to 4 times but we only saw 2 on our visit.

There are other sights to see besides geysers here: 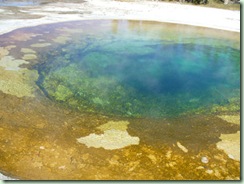 This is Beauty Pool which apparently is losing some of its colour. Still awfully pretty though. I loved the interesting patterns in the bacterial mats that occur either around the pools or in the runoff areas: 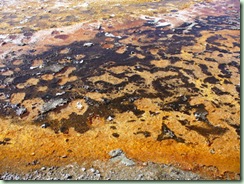 All different from each other. This one is Crested Pool: 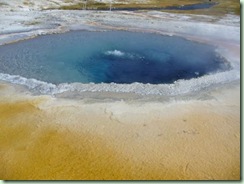 It has a deep centre and a ring of white geyserite. And I think this pool is our favourite: 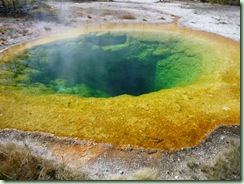 It looks for all the world like its name, Morning Glory, and is about 20 or so feet across and very deep. It also is losing its colour but is even prettier than Beauty.

We walked our little feet off and still managed to miss Daisy Geyser’s eruption. By this point we were getting tired so we walked the paved bicycle trail back to the village and had an ice cream. There was always the next day to explore some more.

However we couldn’t stop ourselves from driving the Firehole Lake Drive one-way loop on the way back to Madison. We saw a bunch more interesting features including a whole steaming lake complete with paddling geese so it couldn’t have been too hot! This handsome raven posed for us: 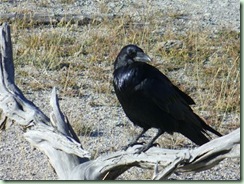 There are more ravens in this area than crows. They are big and cheeky and we watched one try to pick apart a pack on somebody’s motorcycle while the owner was elsewhere. It was a trick a number of them had learned because we saw it happen a couple more times. Don’t keep your snacks in something the ravens can undo! Smart birds though.

Well, I’m going to have to leave this to go make lunch for T-Man. Only got through 2 more days! Not to worry. It will go faster when we’re on the way home. More to come.

In other news, I got the garlic planted and most of the fall rye seed in. The weather has been cool but sunny and the soil is moist so it’s perfect for gardening. I’ve nearly finished spinning 2 more skeins of yarn for T’s sweater too. We’re off to a gallery opening tonight: Felt by Jorie Johnson at the Silk Weaving Studio on Granville Island.