This is another one of my diversionary posts. Real life is getting in the way of my GGG tour report but I decided to just go with the flow. I’ll get to the rest eventually. Promise.

Meanwhile, back home life continues galumphing along. Have you seen how pretty the Japanese indigo flowers are? 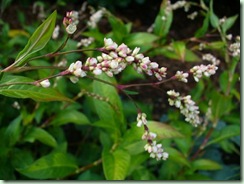 Tiny soft pinks on red stems. So far the plants are holding up ok even though we’ve had a few light frosts in the mornings. Today promises to be quite warm so I’m hoping it will encourage these flowers to get on with seed production. Quick before the anticipated La Niña-induced cold weather sets in. Last year we had unusual killing frosts in November.

Speaking of dye plants, I’ve managed to chop, dry and package a second large bag of weld so now I have lots. It’s really an easy-to-grow dye plant with good light-fast colour. Too bad so many people are not fond of yellows. And it’s such a brilliant lemon-yellow too! Cooler than marigold or coreopsis yellows. Weld makes a great base for clear greens and a brightener for madder oranges. It’s a tall plant in its second year and all parts (except the thickest stems) contain the dye so you don’t need many plants to supply a year’s worth of colour. And a lifetime’s worth of seeds! Luckily they have dye in them too so I just include the extras in the pot with the leaves, flower heads and thinner stems.

While the weather has been good T-Man and I have been trying to get lots of exercise. We’ve walked a lot nearly every day running errands. Other people drive to the shops while we take a couple of hours longer and just walk. It’s a great way to enjoy the neighbourhood and the changing seasons. The gallery opening I had mentioned on Friday featuring Jorie Johnson’s felt creations was fun. We followed it up with fish and chips at Tony’s since we were already on Granville Island. I’ve had a craving for fish and chips while we were on our vacation. Not a particular specialty in Montana or Wyoming. Beef, yum! Halibut, not so much. So nice to have a craving satisfied, yes?

We didn’t walk on Sunday though. Instead we took the bikes on the van out to the Pitt Meadows dykes. There’s a whole complex of flat dyke trails out there, unfortunately gravel rather than paved but mostly not too bad. It was sunny though a little cool in the shade and we rode nearly 12 k in total. It was lovely: 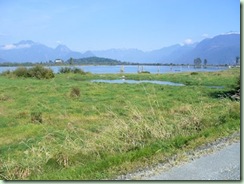 And quite rural with farms full of blueberries and cranberries as well as ornamental trees and greenhouses full of bedding plants. The blueberry bushes are just getting really colourful: 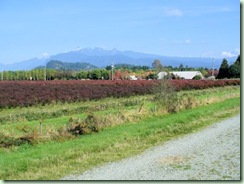 Gotta grab these days while you can, right? In crafty news, I’m back knitting on the Handspun Brownstone sweater: 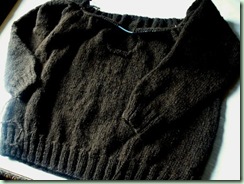 I’ve already used most of one of my newly-spun balls of wool and am cruising up the shoulder area toward the neck. Of course this means I’ve taken the Denise needle tips off the Oatmeal Cardigan again: 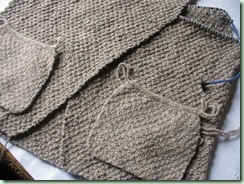 I did finish the back first though. Can you see the difference in the pockets which have been washed and blocked and the main sweater which is still in its just-off-the-cone state? The pockets are lighter in colour and much softer and more cohesive. It’s quite a dramatic change. If I’d known before I started, I might have skeined off all the yarn and washed it first. At least it wouldn’t be quite so dusty and smelling of machine-spinning oil. However, now that I’ve gotten this far there’s no point. It might change my gauge too much. I’ll carry on when I’m done T’s sweater.

So what else? I’m slowly sewing up my Batik Shirt. I’ve been having a lot of fun figuring out new combinations of old and newly-sewn clothes so I’m looking forward to adding this piece to the collection. No photos yet unfortunately. And I have lots more fabrics and ideas to work on too. Never a boring moment around here, is there? Not to me anyhow! This afternoon it’s back to the garden for some more fall clean-up.