I dove into my clothing drawers the other day, clearing out the no-longer-wearable and sorting and refolding the leftovers. I even vacuumed out the dust and waxed the runners under the drawers. Now they open so easily that I nearly yanked a drawer out onto my feet! Have I mentioned that our dresser and bureau are old, the former 1950’s vintage and the latter an actual antique from the turn of the last century. We also keep some items in a trunk that once served as the boot of an early jalopy. T-Man’s mom gave it to us when we married to be revamped with paint and upholstery and it’s been part of our bedroom furniture ever since. Even the closet wasn’t immune from the sorting and dusting process, though we haven’t tackled the stash that’s upstairs in my study’s big closet yet. That’s where we keep the seasonal stuff that rotates down to our bedroom and back and also the costumes and other garments that we just can’t part with but rarely (or never!) wear. I’m saving that area for another time.

Anyway, in the process I came across 2 cotton jersey cardigans, one blue and one black, that I’ve had for several years. I realised that I couldn’t wear them because the front plackets were all skewed: 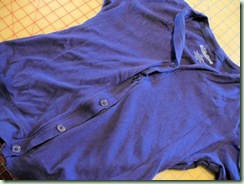 Can you see how rippled the fronts are? How about unbuttoned:

It’s doing a funky wave! I discovered that the reason is simple: the cotton jersey shrank in the wash but the stiff grosgrain ribbon that binds the inside seams of the plackets didn’t. So I picked them off, discovering that they weren’t even necessarily the same length! 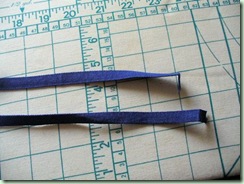 Then I re-pinned them back in without stretching and there was at least an inch left over: (I did the black one first.) After re-stitching the ribbons in properly the fronts lay much flatter and smoother: 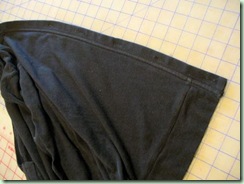 And now they are both wearable again: 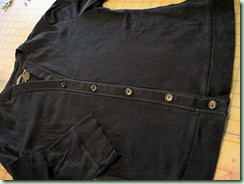 No more skewing and twisting and bubbling. Yay! The fix wasn’t hard at all, just a little time-consuming. A good lesson in pre-washing fabrics before sewing them too. I wish manufacturers would do that but of course that would be cost-prohibitive. They’re supposed to plan for shrinkage when drafting the patterns but of course it doesn’t always work out correctly. Especially when I have a tendency to machine wash warm and dry hot.

So there were quite a few things that ended up either in the salvage pile or in the garbage. More of the latter, especially from T’s drawers! They hadn’t been sorted in quite a few years and there were shirts with frayed collars, jeans and sweaters with holes, dress pants that no longer fit and t-shirts with faded and pilled neckbands. Lots of garments that hadn’t been worn in so long they were seriously dusty! Now I can happily get his jeans in their drawer without a fight. I saved a bunch of t-shirts to be cut up and snipped the buttons off the garbage shirts. And I even inherited a nice long-sleeved polo shirt that neither of us can remember where it came from and could never have fit him properly. However it fits me fine except the sleeves need to be turned up. That’s normal for any ready-to-wear because my arms are 2” shorter than most people’s anyhow. The buttons do up the guys’ way, but who cares? Score.

Now we know where the gaps are in our wardrobes and what we don’t need to buy again until something wears out. He needs more long-sleeved sport shirts and perhaps a pair of twill pants. I need a few more skirts, tunics and dresses – which I’m working on sewing! I do not need any short-sleeved t-shirts or leggings. Neither of us need any new handknit socks right now either. Might not stop me from making more though. Heh.

I kind of wish the Urge To Purge would hit me more often. Truth to tell, it’s much harder to get T-Man to join in and I won’t touch his stuff by myself. Absolutely verboten. And of course it’s only fair. I’d certainly hate it if he tried throwing out anything of mine! (As if he’d live to tell the tale.) Just one of our Rules for a Happy Marriage.