Yeah, I know it’s not Thanksgiving (at least here in Canada – we already had that in October) but today I am truly grateful. I’m very thankful for a warm dry house with electric power and running hot water. Last night we had a huge wind and rain storm that took out trees and power lines all over the place. T-Man and I woke up around 3:30am to a crashing sound. We still haven’t located the source though it sounded like a tree branch. At least it didn’t damage anything that I can see. I’m also grateful that T has an alternative to riding his bike on the littered roads without functioning streetlights and can instead drive the car to work. Most of all, I’m glad I didn’t have to go anywhere this morning. Traffic out there is a zoo.

Storm over. Moving on. A Finished Object! 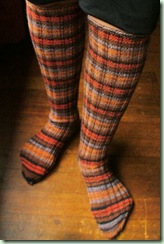 For: me (Yes, the photo is out of focus. You try taking a picture of your own feet and legs in the kind of low light we get this time of year! At least they’re finally dry. Took 2 days.)

Pattern: 110-31 Long socks in ”Fabel” with foot in rib or stockinette st, free pattern from DROPS Design. Ravelry link, DROPS link (the one on the Ravelry page is incorrect).

Comments: I didn’t try to match the stripes and went for a staggered effect. So why do most knee sock patterns have you make a leg only about 12” long? I’m only 5’3-1/2” and I still need 15” from knee to heel flap or they’re always falling down. I also have pretty skinny legs (at least from the knee down!) and used smaller needles than the pattern called for. These fit just exactly right.

Next I need to mention the eMag from Interweave that I downloaded a few days ago. This is the Winter 2011 issue of SpinKnit. (Link is for the PC version but there’s also one for Mac so don’t feel left out.) As the third issue in this series, I think this is a great way to present spinning information. Including videos is the best way to demonstrate techniques that you just can’t get across in words. Unfortunately the “knit” part of the equation gets kind of short shrift with only a few patterns in PDF format. However, there are lots of other avenues to get knitting patterns whereas spinning info is rather more limited.

This issue does include the delightful Sara Lamb dye-painting her lace-knit shawl. (Pattern included.) I’ve done this type of thing before and it takes supreme guts to dab dye all over your knitting that may have taken months to accomplish. The results are really interesting though and an effect that you can’t get any other way. Hope it inspires a few projects! One day I’d like to try this with natural dyes. I’ve already done it on a silk scarf but not on my knitting. Yet.

I think it’s lovely when your hard-earned expertise is validated by a well-known instructor with real skills. That’s how I felt when Stephanie Gausted spun a number of different fibres besides cotton on a tahkli exactly the way I do it! She didn’t spin cashmere though which I’ve done. <smirk>

And then there’s the story of the Imperial Stock Ranch in Oregon and the development of the Columbia Sheep. We’ve been both north and south of the 30,000-acre ranch on our travels but not in the exact area. However, the Deschutes River is the one we camped above at Cove Palisades State Park on our way home last time. And note the view of Mt. Hood behind Dan Carver in his interview. We drove right by this volcano! I feel like I’ve definitely experienced the land that this family loves and cares for. I’ve spun Columbia fleece too and it’s lovely stuff.

Another theme in this issue is silk and I loved watching the silk worker in China reeling the silk with a funky old foot-powered machine. Contrast the way the industrial machine works and the homemade setup of Michael Cook’s system and they all accomplish the same end: beautiful reeled silk yarns. There’s a lovely little tabletwoven band pattern included to make from some fine silk.

SpinKnit and Colorways are definitely my two favourites of Interweave’s eMags and I know I’m going to continue to get them because I get a lot of satisfaction from the interactive contents. Even if I do have to install them on my big desktop computer instead of my little netbook! The eMags are in a different (more common) screen ratio and it’s just too much scrolling to be comfortable. Besides, Bluet the Netbook’s sound quality isn’t great and I have to use earphones to hear anything. It’s much nicer to watch the big screen and listen to the big speakers. Less portable perhaps but I’m not complaining. I’m just lucky to have options. Attitude of gratitude again!

I recognize that yarn!!!! Pretty wild knee socks there . .