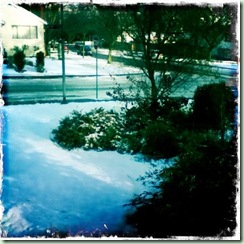 We’ve been having a slap of winter weather around here – right on top of the fall leaves, some of which haven’t even fallen yet. We also had a hailstorm yesterday on top of the inch or so of snow and a lot of the resulting mess hasn’t melted away as it usually does. Hardly anyone shovelled their walks either, thinking that it would all just go away by itself like it usually does around here. But it didn’t. This made walking rather treacherous today and I almost fell a time or two. Weirdly, most of the snow is in our neighbourhood. A half-kilometre in any direction and there’s barely any trace left. At least the sun was shining! I can still hear the cars crunching by on our street though.

Anyway, we did our civic duty and got out to vote in the municipal election, snow or no. There are people in the world who are giving up their lives for the right to vote in a democracy so I think the least we can do is make use of the freedom we have here in Canada. Your local government is the one that affects you most directly too. Water, streets, rescue and safety, parks, community centres, libraries – somebody’s got to run it all for us. Besides, if you don’t vote then you can’t complain about them not doing it the way you think they ought to. The right to bitch about our leaders ranks pretty high on my list of democratic freedoms and I try not to ever take it for granted. Wonder how many of the Occupy folks are voting today? Oh, all right. I’ll stop with the politics now since I try to steer away from that stormy sea on this blog. Just vote when you have an election going, ‘kay? Rant over.

So, I finally have a couple of semi-decent photos of my recent sewing. First finished is the Sleeveless Tunic:

The inspiration came from a garment I saw awhile back on Fawbush’s website. (Love so many of their clothes!) This is a simple shape like an oversized undershirt that’s quite a bit wider at the hem, just two pattern pieces that I self-drafted. The fabric (detail, left) is one that I bought at Fabric Mart in Portland, OR on the way home from our vacation. It’s a kind of slinky knit in black with a graphic pattern in light gray somehow knitted into it. I cannot figure it out! I originally thought it was printed on but it’s not. It’s very spongy and extremely stretchy but has good recovery. The good news is that it’s pretty easy to sew and doesn’t ravel. This pattern only used a yard of 60” wide and I have another project which also uses this fabric. I had 2 yards total so it’s exciting to get two garments out of it.

I ended up making a seam down the back (photo right) due to tight pattern placement on the fabric since I was cutting out both garments at once. The seam actually helped to make it easier to hem the neckline which was V-shaped at the back. I only used the sewing machine and not the serger to put together this quick top: a small zigzag for the regular seams and simple twin-needle hems. Since the fabric was super-stretchy I made sure to carefully stay-stitch the neckline and armholes before hemming. I had some trouble with the twin-needle stitching as one thread kept shredding and breaking. Turned out it was the needle and after changing to a fresh one, it sewed just fine. I luckily had a spare in the same 2.75mm width.

If I make this pattern again I’d like to add pockets! I didn’t have enough fabric for them this time. Either inseam or patch pockets would be really useful.

The second garment that I finished on Thursday was Banana Skirt Too, the second version I’ve made from BurdaStyle magazine, 07/2006 #125.

I love my heavy gray double-knit one so I decided I needed a black one as well. This fabric is a rayon/lycra knit and a lighter weight than my gray skirt fabric. It also creases easier as you might be able to tell from the photo! However, it’s very swishy and soft as well as quite stretchy. Very successful as a skirt. I had 3 metres so the rest of it is going to become a long-sleeved cowl-neck tunic and the contrast yoke and sleeves on a dress from the remainder of the above novelty slinky.

This skirt is really simple, just one asymmetrical pattern piece cut out six times. I forgot that you needed to cut each piece right side up though so they’re all going the same way! Luckily the fabric is identical on both sides or it would have been a disaster. I marked the pattern clearly so I won’t forget next time.

This time I used the serger more than the sewing machine and serged a wide 3-thread stitch to join the pieces and also along the top edge before folding it over and multi-stitch zigzagging a casing for the elastic. This is different than the way I did the elastic on the gray skirt but still simple and quick. The hem was cover-stitched. I decided in this case it was worth the effort to change the serger over to the cover stitch – though it’s quite involved and takes a few minutes to do it. Now I have to change it back again before the next project. It’s not hard but because I don’t do it often I need a cheat sheet to remember all the steps each time!

This skirt goes with everything and I’ve already worn it several times. Which is probably why it’s so wrinkled.

You have been very successful and you look great in your new clothes.

Thanks for the kind compliment, hon'! We mature ladies unfortunately just have to work a little harder at lookin' good. ;)